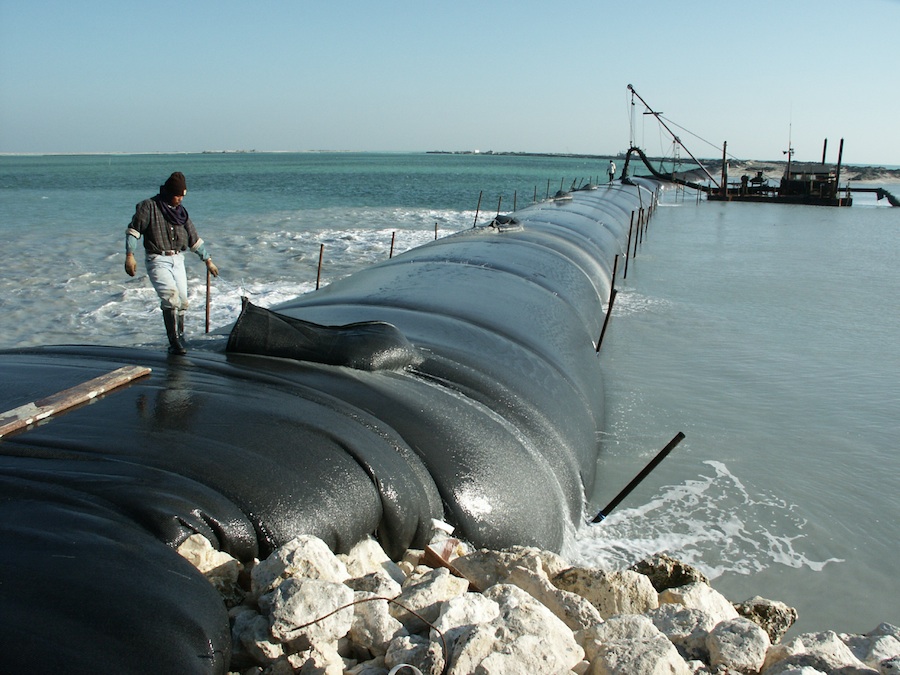 Geo-tubes being filled with sediments at a shoreline.

A massive, distended tube thirty feet in circumference and one hundred feet long lies on the bank of a drifting river, among the sludge and muck. A thick hose connected to a dredging barge is filling this black bag with the silt that it is sucking out of a nearby shipping channel. Once full, the tube will be tied shut and left in place. Fluids will slowly seep out, leaving dewatered sediments contained within the casing. This is the geo-tube[1].

A geo-tube is like an oversized[2] sausage casing made of “geotextile,” a synthetic fabric woven primarily from hydrocarbon-derived polymers[3]. When deployed, they are inflated by liquids, slurries, or sediments, depending on their intended use. Geo-tubes find their application where water meets land and where landscape meets industry. They are deployed along riverbanks, coastlines, in shallows, or wetlands. They have spread quickly thanks to their flexibility, speed of application, and cheapness.

Being little more than high-tech fabric bags, geo-tubes have no rigid or complicated parts. They fold away like industrial bedding when not in use; they take on the form of the raw material pumped inside them; they can be deployed in nearly any situation; and they are mass-produced. If the 20th century found much use and appreciation for the small and humble sandbag, the beginning of the 21st century ushered in the increasingly prolific application of its scaled-up successor. The geo-tube embodies shifts from hard strategies of concrete and steel to soft synthetics and engineered biologies, from public state actors to multi-national corporations.

TenCate Geosynthetics is the primary global supplier of geo-tubes. The business is a division of TenCate, an international materials technology conglomerate with divisions specializing in protective fabrics, space and aerospace composites, “advanced armour,” synthetic turf, geosynthetics and industrial fabrics.[4] Their attractive marketing materials divide their geo-tube offerings into two categories. Geotube® Dewatering containers act as a repository for the oft-contaminated silts that are inevitable side effects of water treatment projects, the dredging of navigable channels, and industrial operations ranging from aquaculture to pulp mills. Geotube® Marine Structures act as rapidly-deployed structures, their flexibility and size making them ideal as temporary breakwaters, or for shoreline and island protection, to say nothing of rapid damming, underwater structure creation, sand dune maintenance, wetland creation and protection, jetties, groynes, dikes, and the production of whole new tracts of land. In the domain of coastal construction, there are few situations where geo-tubes are not applicable.

However, these marketing materials are relatively silent on the larger processes and forces that compel us to lay lines of enormous black plastic slugs across fluvial and littoral landscapes which have been eroding and accreting without human assistance for eons. They do not explain that the geo-tube is an ascendant tool in the larger systemics of anthropogenic erosion, what we refer to as the Dredge Cycle. 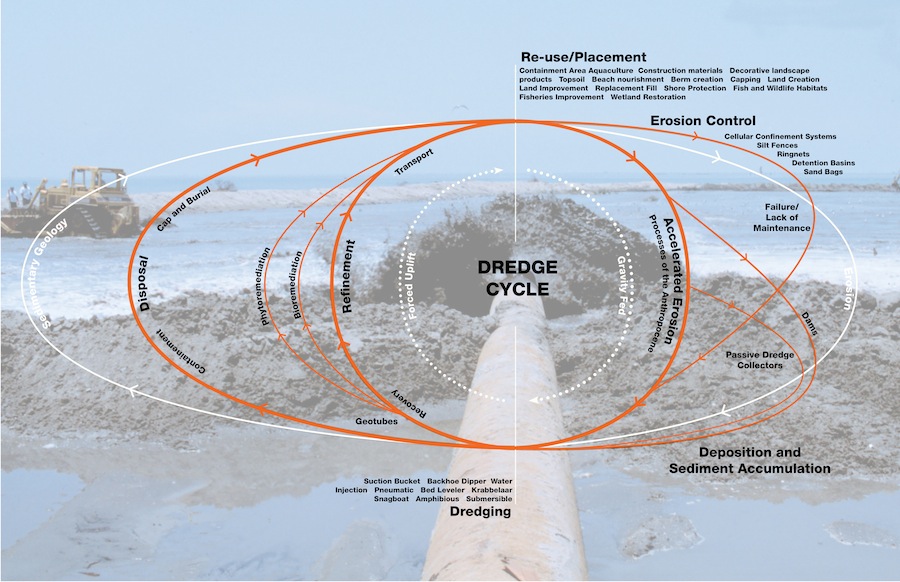 Diagram of the Dredge Cycle. The natural paths of erosion and sedimentary geology (white) are overlaid by the alternately accelerating and decelerating paths (orange) produced by various anthropogenic inputs. The diagram is divided between gravity-fed erosive paths on the right and forced uplift on the left. Distance from the center of the diagram abstractly represents time -- the farther the orbits are from the center, the slower they are. At the bottom, dredging is the key moment at which sediments shift from being under the influence of gravity to defying gravity.
back to top ↑

The Dredge Cycle is not limited to the activities of dredging machines (dredge as a linear act of industrial engineering), but encompasses a much wider range of anthropogenic sediment handling activities and practices. These act upon, feedback to, and destabilize one another, producing a quickened anthropogenic counterpart to conventionally defined geologic cycles.[5] This cycle can be split into two primary phases: anthropogenically accelerated erosion and the manufactured uplift of soil, silt, sand, and sediment. Like the rock, water, and wind cycles, it is ubiquitous, operating wherever humans intentionally or unintentionally move sediment.

The Dredge Cycle is geological in its processes and the material it cycles, but not in its duration. Its unintentional aspects are driven by the assumption of human control over erosive processes (hardtop surfaces prevent the absorption of water, causing accelerated erosion where that water flows; coastal structures alter current patterns, depositing more soil in one area while depriving another). Its intentional aspects are symptoms of economic and political systems that assume stasis in a landscape that was never static (homeowners fight to maintain beaches lest their front yard be washed out to sea; logistics firms demand uninterrupted access to shipping channels). The Dredge Cycle is a crass geology, run on a human timescale.

The Dredge Cycle consequently operates at an ever-increasing pace. The methods used to halt the forces that we set into motion are crude, and routinely throw sedimentary systems out of equilibrium. For instance, when a shipping channel is dredged to deepen it, this destabilizes the riverbed and the channel begins to fill at a faster rate than before the operation, which necessitates further dredging, which produces additional destabilization. Such cycles spiral inward, growing tighter and faster, across the breadth of the Dredge Cycle.

Geo-tubes are relative newcomers to these systemics[6], but they represent larger trends within the Dredge Cycle at least as well as any other material technology. The geo-tube is both a response to the increased speed and quantity with which humans encourage sediments to cycle across the surface of the earth, serving to slow coastal erosion, for instance, and a contributor to that process. The geo-tube makes it more convenient -- faster, easier, and cheaper[7] -- than ever to confine, place, and move sediment. This convenience breeds ubiquity; when something is fast, easy and cheap, the tendency is to do more of it. Geo-tubes are consequently one of the many forces driving the expansionary logic of the Dredge Cycle, feeding its tendency to bring ever-increasing quantities of sediment under the influence of human sediment-handling practices[8]. 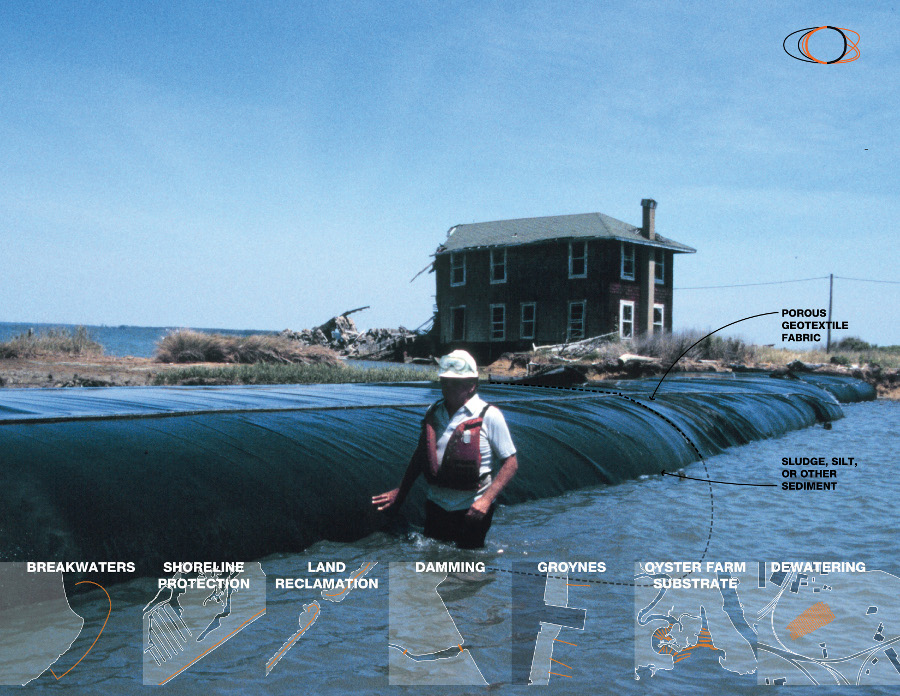 Diagram of the expanding variety of geo-tube applications. Each use implies a particular architectural character for the installation and varying relationships between water, land, and geo-tube.
back to top ↑

Because of its flexibility and adaptability, the geo-tube is nearly omnipresent in the Dredge Cycle. Like a scaled-up merger between sandbags and silt fences, the geo-tube can be deployed as an erosion control measure that slows accelerated erosion through placement as a physical barrier. When used in erosion control, the geo-tube is itself filled with dredge material harvested from clogged streams, rivers, and bays. Alternatively, when employed as soft dams, where they, like all dams, act to trap sediment and induce siltation. The geo-tubes’ porous synthetic skin allows for the recovery of sediment by permitting the passage of water while trapping suspended particles. This captured material can then be refined, or sorted into clean and contaminated components, which in turn can then be reapplied for a range of ‘beneficial uses,’ including the production of new land, submarine terrain, and landforms. This kind of cyclical feedback, a single technology contributing to the anthropogenic acceleration of erosion while simultaneously trying to decelerate or reverse those effects, is one of the most basic characteristics of the Dredge Cycle.

The geo-tube literally encapsulates the sublime materiality of the Dredge Cycle, as sediment and water in slurried suspension are stuffed into geotextile casings. The Dredge Cycle is fundamentally composed of wet stuff: basic materials; ordinary sand, silt, clay, and water. While it can and should be understood as a highly abstracted set of networks and feedback loops operating on a global spatial scale, it should also be understood as a material operation. It is the cubic yards of excavated soil downwashing across your backyard from the new construction three houses down in a rainstorm as much as it is globally networked processes like the expansion of the Panama Canal to accommodate the importation of goods from East Asia driving port expansions and dredging operations along the East Coast of North America. Similarly, geo-tubes are always dirty: placed in muck, filled with muck, and, like muck, slumping and slouching into soft shapes, rather than following the precise angles of architectural geometry. 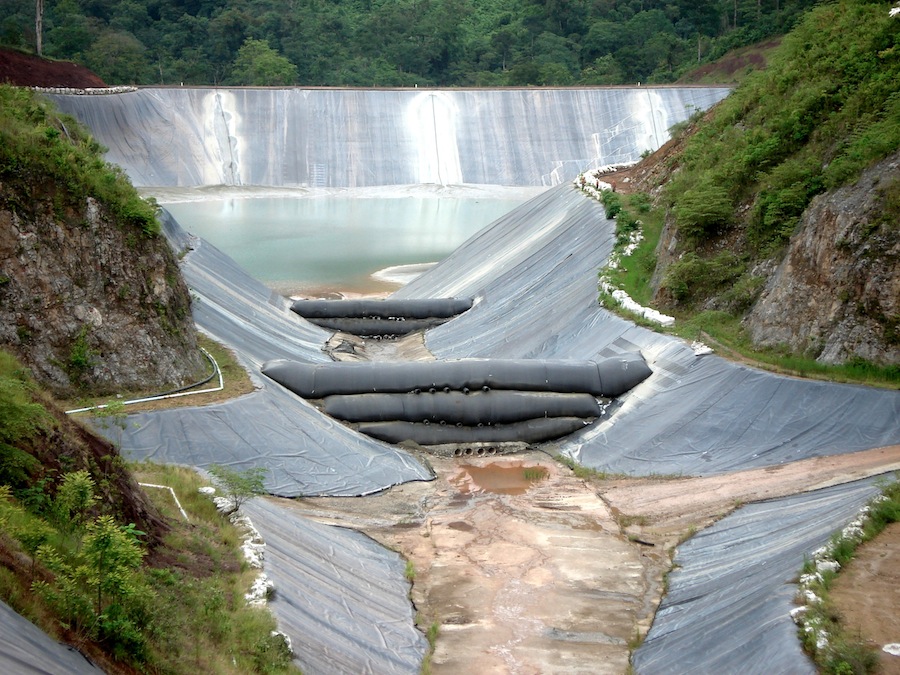 Geo-tube Dams In Honduras. TenCate’s Geotubes® have been deployed for “the construction of two dams in a river bed near a storage lagoon for mine tailings slurry in Honduras. The technology ensures storage, dewatering and filtering of polluted ground.” [9]]

The geometry of the geo-tube is no more natural than the clean modernist lines of the Hoover Dam. It is something else entirely, both post-natural and post-architectural. This seems entirely appropriate for an era in which we are freezing sediment-spraying rivers in specific configurations, like the Mississippi at Old River Control, or impounding the eroded sediments of entire continents behind vast concrete structures, like Three Gorges Dam. Our largest monuments are not pyramids and skyscrapers, but geologic impacts.

The Dredge Cycle is thus landscape design on a deliriously monumental scale, but unrecognized as an architecture. It instead remains the domain of logistics, industry, and engineering. Geo-tubes, like other geosynthetics and indeed nearly all of the infrastructure of the Dredge Cycle, are not usually placed or constructed with a particularly conscious aesthetic aim. Rather, they are part of the infrastructural vernacular of civil engineering's ordinary monuments. When they are used with conscious aesthetic intent, they tend to be hilariously unsuited to the cosmetic tasks they are asked to perform: resort-beach-bound geo-tubes literally whitewashed, for instance, to look sort of like pale sand, which only serves to make them more obviously awkward. However, this abdication of aesthetics is in itself an aesthetic, though a different kind, less conscious, more primal -- which is perhaps its appeal. The greatest aesthetic triumph of the geo-tube is the manufactured Amwaj Island in Bahrain, beneath the sands of which lie the world’s largest geo-tube installation[10]. And the way that the geo-tube is unceremoniously dumped into streams on Filipino golf courses and along Mexican beaches and on the coastal dune-scape of Virginian spaceports captures exactly the unconscious nature of this un-aesthetic, and the weirdness of the geo-tube. 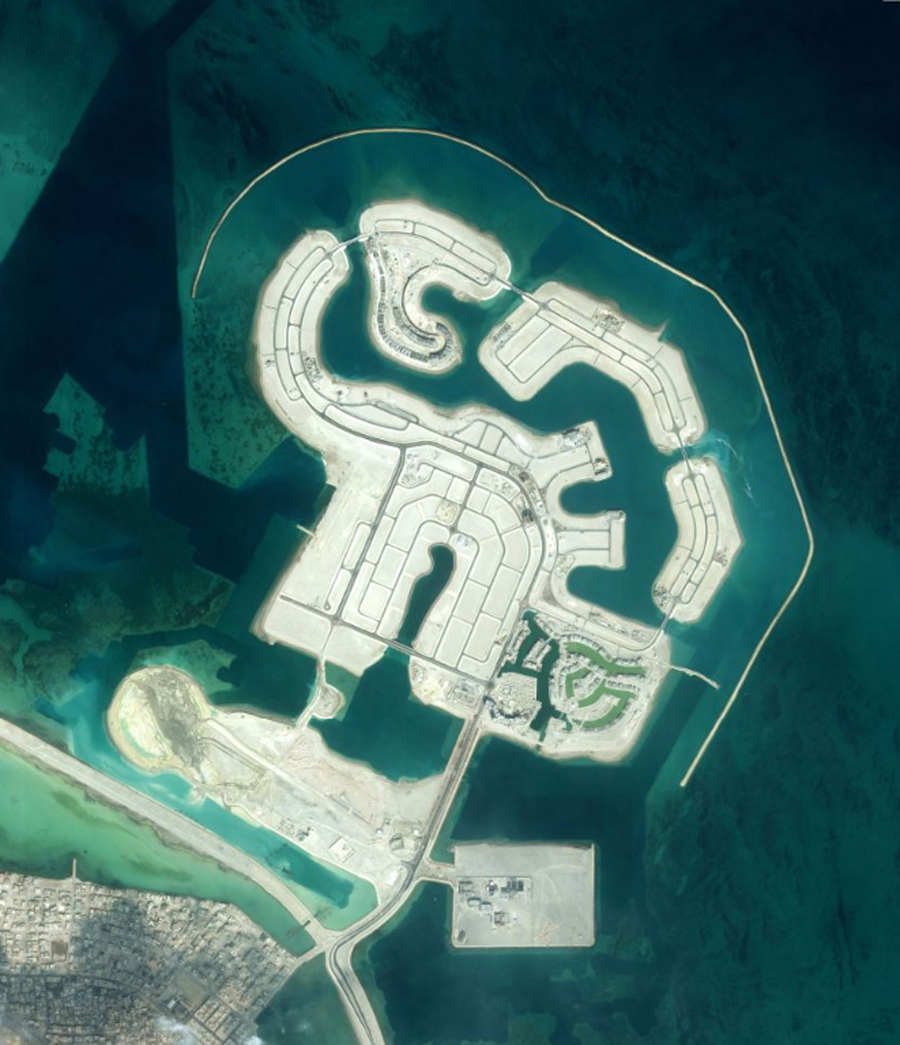 Aerial view of Amwaj Island, Bahrain. As described by Geotec Associates, “The key element in the successful design, construction and completion of the Amwaj Island development project was the use of sand filled Geotubes to form the island perimeter for containment of 12 million cubic meters of dredged sand that formed the basic platform for the development project. The island perimeter was constructed by hydraulically filling Geotubes with local sands from proposed navigation channels and marinas serving residents and businesses on the main island of Bahrain...Amwaj Island development will provide a variety of amenities such as living in beach front properties, hotels, restaurants, recreation parks, theaters, marinas, and golf courses.”[11]]

The Anthropocene may have begun accidentally and unnoticed, but now that we have seen it, it is necessarily propelled by choice, by our awareness of our capacity to shape it[12]. As a working material, geo-tubes suggest the possibility of a new soft architecture that at once works with and against geologic forces[13]. In a very physical and material way, these horizontal monoliths open the door for architecture as process, as the conditions under which they are deployed cannot help but suggest structures in the process of accumulating and structures in the process of dissolving.

Geo-tubes embody a new vernacular of engineered geology, of infrastructures for the self-aware Anthropocene. They surprise and captivate us, just as elevated freeway interchanges and massive dams captured the cultural imagination of the last century[14]. They are a harbinger of things to come.