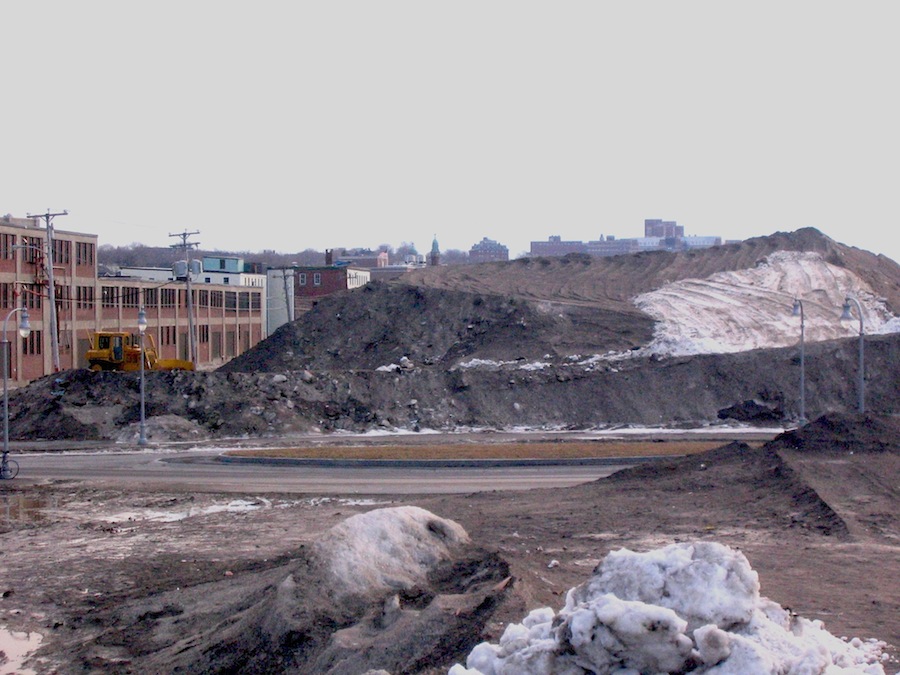 Inner-city “snow dumps” are holding areas for snow collected from city streets during the winter months. They relocate, consolidate, and reveal a condensed record of a city’s air and water pollution.
Image courtesy of Christian Neal MilNeil

There is a sediment that hangs in a haze above city streets: a low-dose toxic dust of lead and chromates from tire wear, clouds of carbon soot mixed with hydrocarbon gases and fine particles of nitrates, sulfates, and other metals from exhaust pipes. At every stoplight, worn brake linings leave behind microscopic flakes of copper, zinc, and lead.

These automotive disjecta membra are rarely visible; you might find them as a dirty streak on a handkerchief after wiping your brow on a humid day, or in the accumulated dust of an a/c unit’s intake. In most situations, these particles either disperse in the winds, or wash away into storm drains during rain showers.

But for a few months each year in cities of the upper latitudes, when precipitation falls as snow and remains above-ground in snowbanks for weeks at a time, these sediments have a chance to accumulate in impressive and highly-visible roadside deposits. Many of these cities collect and stockpile their snow in massive municipal “snow dumps” in order to keep city streets and sidewalks clear, thus consolidating the roadside’s silt even further. 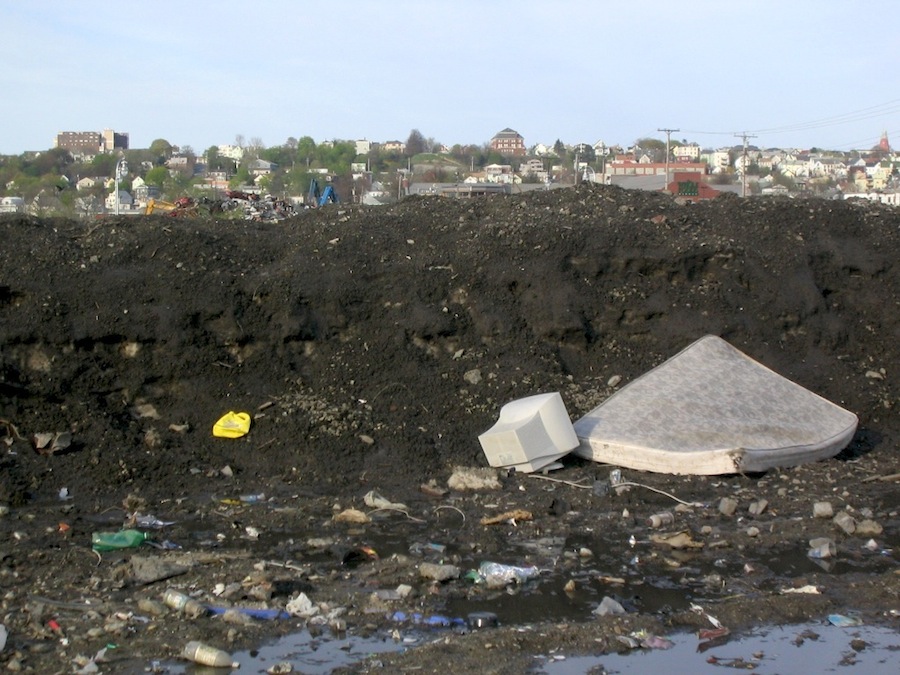 When city crews collect snow and pile it in snow dumps, they scour microscopic material first from the atmosphere, then from the ground, just as a glacier would. When the snow and ice finally melts at the onset of summer, these accumulated materials leave behind a terminal moraine of filth, typically one or two feet deep, that can serve as a sedimentary record of the city’s winter.
Image courtesy of Christian Neal MilNeil

Abandoned or little-used industrial sites seem to be popular sites for snow dumps: Toronto uses a semi-abandoned quay in the Port Lands just outside of downtown; Elmhurst, Illinois dumps its snow into a deserted quarry. My hometown of Portland, Maine, dumps most of its snow in the empty flight path of the city airport, but an auxiliary snow dump gets built every winter just a few blocks from my home, in the Bayside neighborhood. It’s an empty city-owned lot on the backside of downtown that had been a rail yard until the 1980s, and has been the hoped-for site of a few aborted redevelopment proposals since then. While it waits for high-rise office buildings, the city instead builds there a high-rise pile of snow, which the neighborhood half-jokingly calls “the Bayside Glacier.”

Only half-jokingly, though, because there are a few legitimate reasons why it’s apt to think of urban snow dumps as glaciers. First, there’s their spectacular bulk and durability: the Bayside glacier can grow to a height of several stories, rising above the industrial neighborhood’s low-slung warehouses to compete on the skyline with Portland’s modest collection of downtown office buildings. The snow and ice inside frequently remains well into June, insulated from the sun under a protective mantle of accumulated road grime.

And just like a glacier, snow dumps are a legitimate geological force in the city’s landscape. As snow falls from the sky, it scours out the microscopic pollutants of the city’s atmosphere and carries it to the ground. Snow that hits the pavement of city streets and sidewalks also binds to road salt, oil, and antifreeze. All this gets plowed to the curbside, where the snowbanks collect larger items like forgotten bicycles, garbage bags, dog shit, piles of leaves, and other street detritus. In the days following a snowstorm, convoys of dump trucks will crawl along the streets behind a huge municipal snow-blower, which consumes entire snowbanks in its giant spinning blades and regurgitates them into the waiting trucks.

Thus the city’s road grime and curbside filth, all of which were swept away weekly during the warmer months by street sweepers or the occasional rainstorm, instead get bound up in ice and concentrated in the city’s glaciers for weeks at a time.

In late March and April, the top layers of the glaciers begin to melt away, revealing a sedimentary record of the winter. Near the bottom, a layer of leaves indicates the November storm that struck before the city crews had a chance to haul away the autumn’s leaves; further up, a thicker-than-usual streak of garbage might indicate a storm that coincided with trash pickup day. In a process that glaciologists call preferential elution, microscopic impurities migrate to the surface while the outer layers of snow and ice melt or sublimate into the air, such that the entire thing resembles less and less a pile of snow, and more and more a pile of muddy filth.

When the last of the snow and ice finally melts at the onset of summer, these accumulated materials leave behind a terminal moraine of toxic mud, typically one or two feet deep - a visible distillation of a winter’s worth of city air.

And so for the balance of the year, on an empty lot on the edge of downtown, two acres of gravelly filth remind us of what it is we filter through our lungs, every day, year-round -- a spectacle even more humbling than a five-story pile of snow. 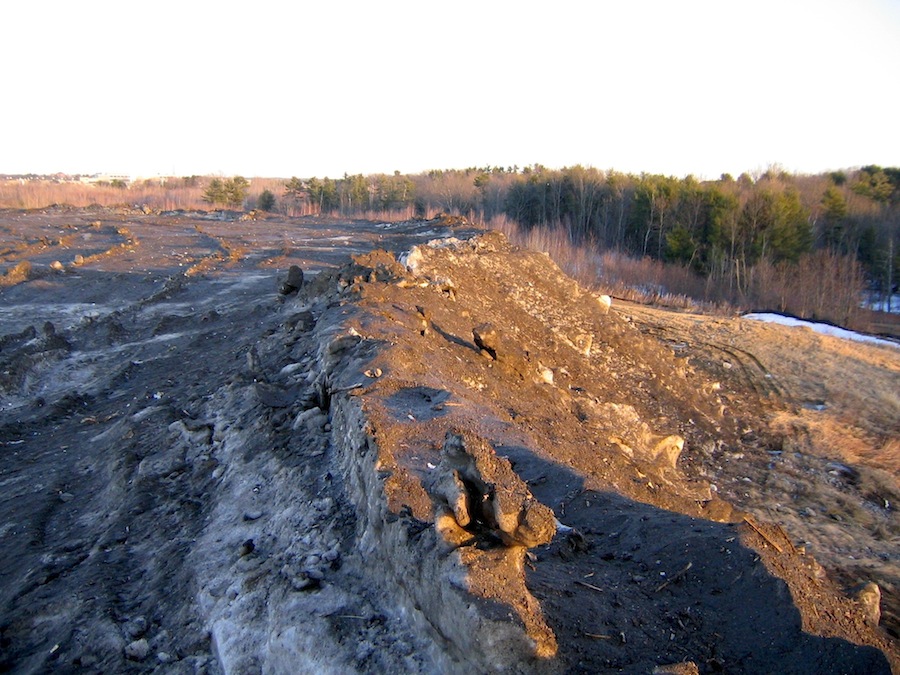 While snow dumps are typically considered a blight, their ability to consolidate pollution over the course of an entire season, and make this collection visible with the onset of spring, gives them value to anyone who seeks to see what we typically think of as invisible.
Image courtesy of Christian Neal MilNeil
back to top ↑