This project maps a series of boulders that were plucked, transported, and deposited by the toe-line of the retreating Late-Wisconsin and pre-Wisconsin ice sheets in North America and subsequently named, relocated, modified, and celebrated by people. They are the glacially distributed sites of council meetings, picnics, political movements, and territorial markers. They are inscribed with discrepant personal, regional, and national narratives and at the same time they declare their foreign origin through their conspicuous mineral composition and form.

In the mid-19th century such boulders served as critical evidence for piecing together a theory of glaciation, and consequently an idea of geologic time and the location of humans within it. While their scientific importance waned in the 20th century, outside and alongside geology they are critical objects for reflections on time and space of various scales and consequences. They refer simultaneously to different moments in time: their geogenic formation, their glacial deposition, and specific events in cultural history, as they are sometimes literally carved with a date. They are heavy, insistent markers in space, yet they indicate a remote origin -- and therefore the journey between two sites -- and they continue to be moved or changed by ensuing human forces. The naming, photographing, and feting of the boulders collated and mapped here signal their role as persistent devices for locating deep time within the present and grappling with the continuum of geological and human action.

At the Last Glacial Maximum, or Wisconsin Glacial Period in North America (26,000-20,000 years ago),[1] vast ice sheets extended across Northern Europe, Northwestern Asia, and much of the Andes. Acting as a mammoth material conveyor, flowing ice transported fragments of rock as it advanced. These blocks, bound tightly by the ice, scoured the surfaces that they passed over, abrading deep parallel grooves in the direction of ice flow. The majority of this rock material was deposited near to where it was picked up. A small fraction of it, usually that composed of harder minerals, travelled much further and was deposited, often on bedrock of a different mineralogical composition. German-Swiss geologist Jean de Charpentier described landscapes of the southern Jura Mountains that were conspicuously strewn with such boulders as terrain erratique.[2] The term originally coined to describe an anomalous landscape later came to describe the individual thing: the foreign boulder, the erratic.

Massive glacial erratics were found on German plains originating from Scandinavia, in Brandenburg originating from across the Baltic, and in St. Petersburg originating from somewhere near Finland.[3] By the early 19th century, their distribution was considered “one of the most widespread, most striking and most inexplicable of geological phenomena.”[4] Alpine shepherds, closely observant of local landscape change over long durations, were the first to note the form of angular boulders downslope of retreating glaciers and convey their suspicions to early naturalist visitors.[5] These localized data points, when aggregated, confirmed the speculation that existing glaciers had once been larger, and that ice, rather than the deluge, had distributed boulders throughout the valley. This led to the development of a theory of continental scale glaciation.

The “Map of Named Erratics” (Fig. 1) likewise aggregates individual data points to draw a continental scale pattern of glaciation. In this case, the data points are some 207 culturally identified boulders distributed along the east to west glacial limit line. Named boulders were located from scientific and popular geological texts, town newspapers, local history museums, and for more recent documents, through geo-caching websites. Rocks were included as long as they had somehow been named, recorded, and characterized on an individual basis, and as a minimum criterion, whose name would be recognized by people who don’t know each other. “An erratic on Mt. Washington” wouldn’t make the cut, but “Sleeping Boulder” would. Rocks are often given the name of the river, town, or street that developed around it. Other times names describe the rock’s likeness to an animal or object (Frog Rock, Whale Head Rock, Bung-Stopper Rock). A series of names describes the positioning of the rock, and its stability or instability (Tilting Rock [Fig.19], Balance Rock [Fig.8], Tripod Rock [Fig. 15]). There are five "Split Rocks," not surprisingly all of which are broken into pieces, indicating an interest in the idea of the boulder as a singular unit. There are seven boulders named “Indian Rock,” which suggests the legacy of appropriating, stealing, and museum-izing of indigenous and often sacred boulder landmarks. The base drawing is a USGS map of glacial features (1945), which indicates the extents and surface deposits of the Wisconsin, Illinoian, and Kansan Ice Sheets, and then at a much finer grain indicates smaller scale glacial phenomena. A dotted branching symbol indicates the site of a boulder train; a small cross signifies areas where multiple erratics have been observed. Individual boulders, whose observation was instrumental in the understanding of these large-scale processes, however, slip out of the resolution of such maps. 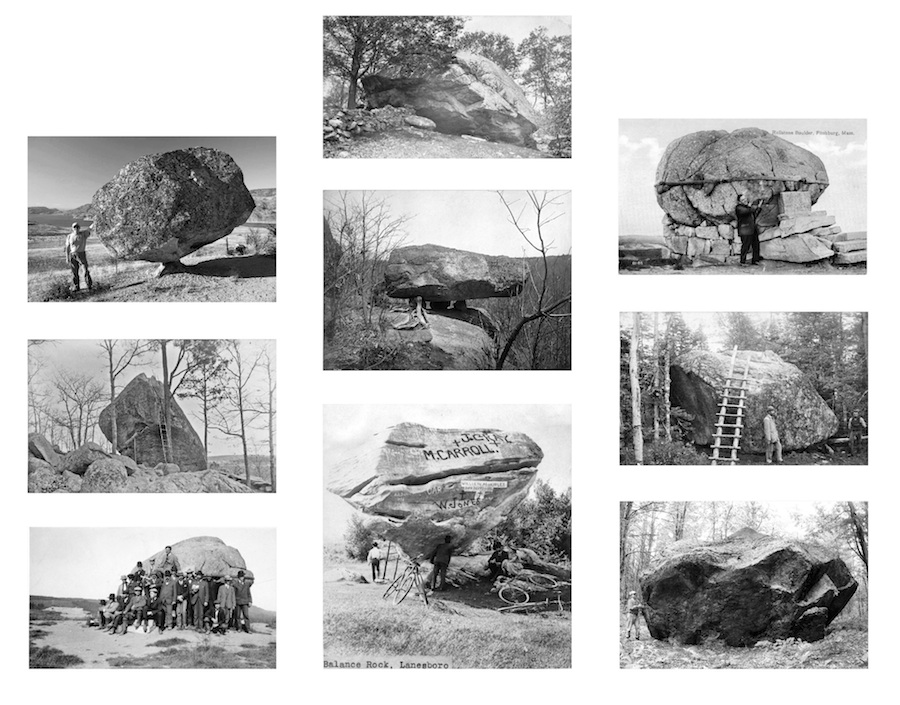 (from left top to right bottom) 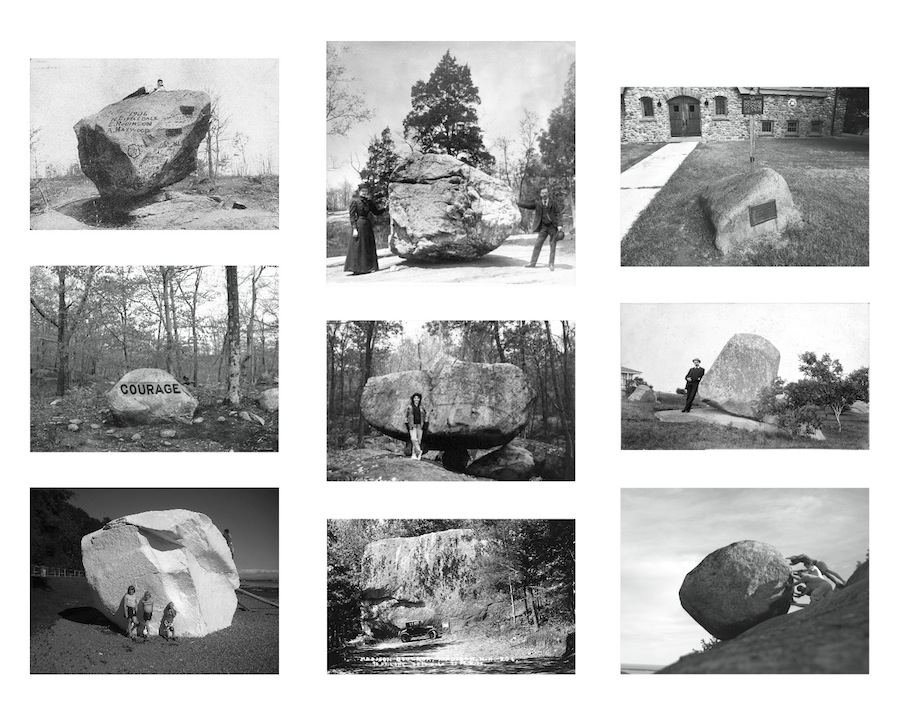 (from left top to right bottom)

The photographs or rock portraits assembled here (Figs. 2-19) illustrate 17 of the mapped boulders and were taken from the 1880s to the present. The earliest photographs shown here were used by field geologists studying glacial evidence in New England. Other rock portraits range from promotional postcards to travel photographs from online photography databases. The photos depict ways that people measure, move, and inscribe the boulders, which can be understood as their attempts to think through their relation to geological forces. First, the typical rock portrait includes a scale figure (a person) standing next to, lying on top of, or pretending to support the weight of the boulder through a laboured pose (which is compulsory when visiting Bubble Rock, Acadia National Park, [Fig. 19]). The impossibility of physically moving these massive boulders, coupled with the knowledge that in fact they had been moved great distances, allows one to size up forces otherwise beyond comprehension. A second typical photo, and related to the first point, features the class of erratics that are perched on uneven ground and have the ability to “rock.” These have long received extra attention. Both the Kidstone Lake Rocking Stone (Fig. 9) and the Bronx Zoo Rockingstone (Fig.14) are pictured as anticipating motion: at Kidstone Lake a man stands near the large lever installed to give the stone a boost, and in the Bronx Zoo portrait the stone is flanked by individuals who might give it a push. This ability to animate something so seemingly static opens up the possibility of it moving again. A third type of portrait features the inscription of dates and words as a means to commemorate recent time and meaning. These are seen from Plymouth Rock to the Babson Boulders (Fig. 12, “Courage”). Prayer Rock (Fig. 17), significant in Lakota accounts of the creation of the earth, was moved 68 miles to the front of the public library grounds in Ipswich, South Dakota. The rock is mentioned on a website listing Ipswich’s major attractions, as is the mural that depicts the founding history of the town, in which the rock is prominently featured even as all traces of the Lakota have been erased. Prayer Rock is branded with a plaque that commemorates the erection of the library, not the rock, signifying the ways in which erratics are convenient media for manipulating time and history – the Lakota population present both at the time of colonial expansion and now, are relegated to a naturalized pre-history.

Gathering and resituating these individual anecdotes within the continental scale highlights the role of local, distributed observation as integral to the large-scale representation of geological processes. It also recognizes the ways humans grapple with time and spatial scales that are beyond comprehension. As scientific objects essential in the construction of a theory of deep time, and as popular artefacts to assist in contemplating and re-writing time, erratics link the seemingly unbridgeable chasm between human and geological scales.

Many thanks to Senta Burton for assistance with this project.