“What would happen to our thinking about nature if we experienced [non-human] materialities as actants?” Jane Bennett asks in Vibrant Matter: A Political Ecology of Things. One result might be a different way of thinking about earthquakes. The stresses and fault lines and tectonic-plate collisions that produce them are material forces whose actions can reshape the world in ways that profoundly affect human life. Earthquakes remind us that human lives take place against a background of geologic time and that human agency, however nature-bending, is ultimately shaped by the non-human context in which it operates.

Living in a known quake zone where Earth’s tectonic plates meet means inhabiting a geology that feels very much alive, not buried in the remote past. Think Japan, Chile, and the other nations along the Pacific “rim of fire,” not to mention its eastern border: California, the American northwest and Alaska. This doesn’t mean that those who reside far from plate margins live in safety. Perhaps the strongest earthquakes to hit the United States in recorded history were intraplate, as geologists term it, not at a tectonic edge. They happened exactly 200 years ago in the middle of the North American Plate, in a place called New Madrid in the Mississippi River Valley. Three huge quakes hit from December to February 1811-12, with estimated magnitudes (the seismograph was not invented until 1896) as high as 8.1. The anniversary is a reminder that reverberations from immeasurably ancient geologic events can burst into the present without warning.

Americans who live on the East Coast got their own intraplate reality check on August 23, 2011. As many were returning to work after lunch, a 5.8 magnitude quake struck Mineral, Virginia. Because the Earth’s crust in the East is brittle and relatively unbroken, shock waves were felt as far south as Alabama and all the way to Canada. (By contrast, the frequent quakes of the West Coast result in chopped-up rock that deflects wave motion, making earthquake impact much more local.) Washington, DC, shook hard enough to open cracks in the Washington Monument; authorities closed the site “indefinitely” pending repair. At the National Cathedral, a stone angel and other pieces of the central tower fell to the ground. New York City evacuated courthouses and many office buildings.

Although the eastern U.S. borders the Atlantic Ocean, it’s not at the edge of the North American Plate. The plate’s eastern border is the Mid-Atlantic Ridge at the center of the ocean, surfacing only at Iceland. Intraplate quakes originate in geologic weaknesses within a plate that succumb to stressors as pieces of the Earth shift over time. The Virginia temblor occurred near ancient faults involved in creating the Adirondack Mountains some 250 million years ago, according to Columbia University’s Lamont-Doherty Earth Observatory. “This is a wake-up call to take earthquake preparedness in the northeast more seriously,” said seismologist Arthur Lerner-Lam, its interim director. “Let’s not turn over and go back to sleep.”

The danger may be even greater in the New Madrid Seismic Zone (NMSZ), which sits over historically active faults within the rift valley that formed more than 500 million years ago in the crust under southeastern Missouri, northeastern Arkansas, and northwestern Tennessee. Later, this Reelfoot Rift system filled in with a thick layer of sediment. Eventually, the Mississippi River and its valley formed over it. By 1811, the land was mostly wilderness and wetland, with a few small settlements along the river, of which New Madrid, now a small town in Missouri, was the largest. Its population was about 400, according to Jay Feldman’s When the Mississippi Ran Backwards, a history of the disaster.

The first of three immense quakes struck on December 16th, 1811, at 2:15 a.m. It was a warm December night when at least some of the townspeople were recovering from a Sunday night dance. It began with loud rumbling, then sleepers were jolted awake as furniture flew across the room. People ran into the street in their nightclothes. As the earth cracked and the river roiled, plumes of sulfur-smelling vapor filled the air along with the cries, not just of humans, but of farm animals and wild birds. Trees swayed and snapped, chimneys fell. Giant cracks appeared; in the nearby town of Little Prairie (now Carruthersville, Missouri), a granary and smokehouse slid into a fissure, which then closed, swallowing them. It felt like the end of the world. “The loud, hoarse roaring which attended the earthquake, together with the cries, screams and yells of the people seem still roaring in my ears,” one New Madrid resident wrote a friend.

Two other temblors, also immense, followed on January 23rd and February 7th of 1812. In addition to the big quakes there were dozens, if not hundreds, of smaller shocks. Houses fell, the ground liquefied, the Mississippi ran backwards and a sizable lake was born, all just 165 kilometers north of Memphis. Geo met bio with a violence that still surprises. 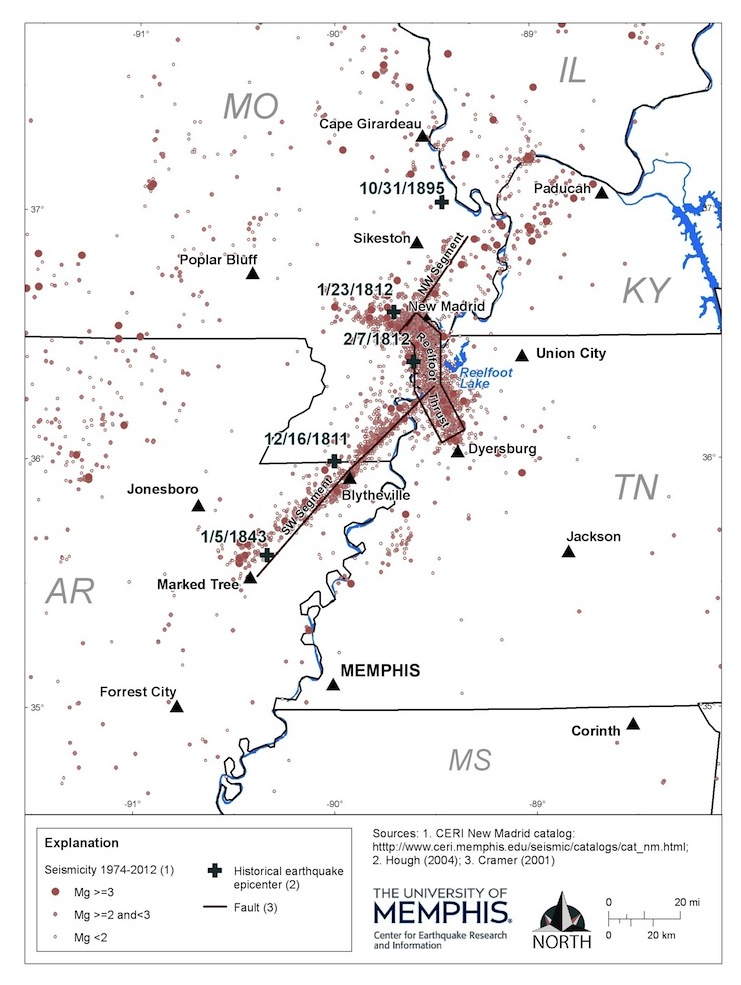 To this day, the New Madrid region “remains the most seismically active area east of the Rocky Mountains” according to the Seismological Society of America (SSA), which marked the anniversary by holding its 2011 annual meeting in Memphis, followed by a field trip to the geological remnants, which this reporter attended. The SSA calls the buried rift valley [see Figure 1] “a serious threat to the metropolitan and agricultural areas of the central United States and to the numerous lifelines that pass through [it].” These include four of the nation’s five major natural gas pipelines. Since 1812, there have been at least 28 damaging earthquakes, with estimated moment magnitudes between 4.2 and 6.4. Meantime, paleoseismologists have found evidence of previous New Madrids in 300, 900 and 1450 C.E.; some believe earlier ones struck in 1000 and 2350 B.C.E.

The most visible sign of the destruction is a pattern of sand blows, stretches of sand that boiled up from below when quakes liquefied the earth. These pale patches still stand out clearly against the darker Mississippi mud. The SSA group’s guide, paleoseismologist Martitia Tuttle, whose research established many of these dates, showed us examples in the Yarbro excavation near Blytheville, Arkansas. Figure 2 shows an upper sand blow and a lower one, plus a sand dike, remains of the channel through which sand-bearing water erupted to the surface. 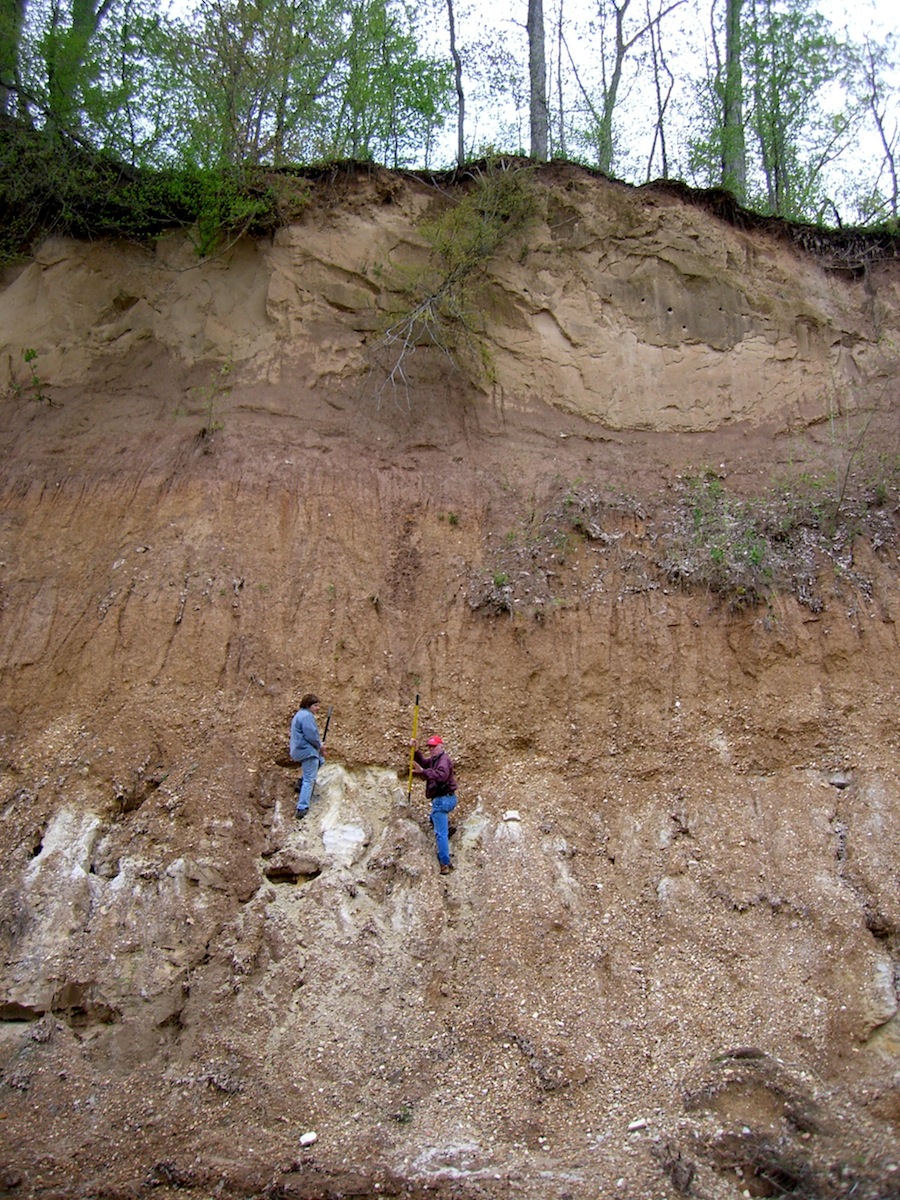 Vivid eyewitness accounts recall some of these explosions. Thirty miles downriver from New Madrid, an eight-year-old in the town of Little Prairie saw the ground “rolling in waves of a few feet in height, with a visible depression between. By and by those swells burst, throwing up large volumes of water, sand and a species of charcoal,” according to a report printed in When the Mississippi Ran Backwards.

At a later stop, Tuttle and geologist Roy Van Arsdale of the University of Memphis scrambled up the sheer 50-foot bluff over Pawpaw Creek to point out the layers of sand and rock left by New Madrid and other geologic events. As the rest of the group stood across the creek far below them, they showed [Figure 3] a deep base, a gravel layer that marks the original level of the Mississippi River, layers of Pleistocene rock, and much evidence of landslides. The Reelfoot River, into which the creek once emptied, disappeared after New Madrid. 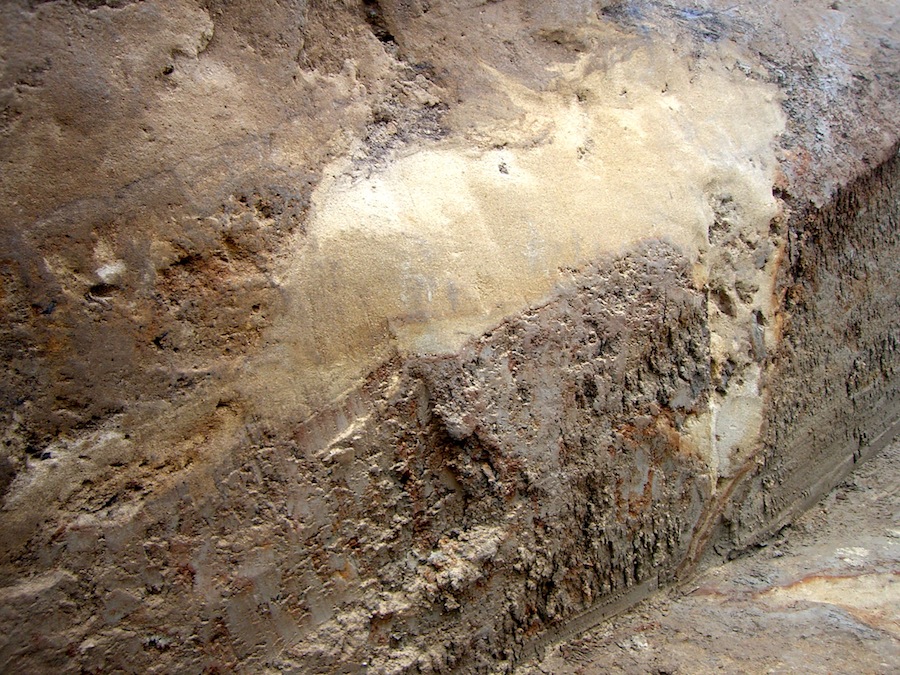 Could it happen again? The Federal Emergency Management Association sees “potential for a catastrophic earthquake equivalent to those in the 1800s, centered on the New Madrid zone,” as Mike Pawlowski, a FEMA instant response section chief, told a February 2006 hearing of the House Subcommittee on Economic Development, Public Buildings and Emergency Management. The probability: “about 10 percent in the next 50 years,” according to Eugene Schweig of the U.S. Geological Survey. It might sound low to some people, but he says it’s “actually quite high.”

We could be getting close, at least by geological time standards: “For the last 2,000 years there have been sequences every 500 years,” says U. S. Geological Survey seismologist Susan Hough. Author of three books on quakes, she measured the principal New Madrid quakes at about 7.0, lower than other estimates. “I think most scientists would say it’s not prudent to assume it’s over.”

The emergency management community seems to be getting the message that geology isn’t just a West Coast problem. On April 28, 2011, FEMA, the Central United States Earthquake Consortium (CUSEC), the U. S. Geological Survey, and the Institute for Business and Home Safety joined with state and local partners for the Great Central U.S. ShakeOut. More than three million people at nearly 10,000 sites signed up to take part in this multi-state earthquake drill for local communities in the NMSZ, modeled on exercises held in California.

A few weeks later FEMA, the Centers for Disease Control and Prevention, the Food and Drug Administration, and voluntary agencies such as the Red Cross—plus state emergency operations centers in Illinois, Indiana, Missouri, and Arkansas—participated in National Level Exercise 2011. This dry run for handling a catastrophic 7.7 level earthquake on the New Madrid fault was “the first national exercise to look at a natural disaster,” Jim Wilkinson, CUSEC’s executive director, told the seismology meeting in a luncheon address on April 15th.

Though some activities were truncated by the need to respond to May 2011’s real floods and tornadoes, more evidence of the power of non-human materialities, both projects took place. They evince a new openness on the part of government and business to the geologic underpinnings of our landscape and the need to respond to the suddenness with which these ancient forces can make themselves known.

It’s interesting to juxtapose these developments with the concurrent realization that human activity is increasingly influencing geology. On the earthquake beat, debate rages about whether the deep underground wastewater disposal wells required by the controversial natural-gas extraction method called hydraulic fracking can trigger them. The Arkansas Oil and Gas Commission closed two disposal wells in July 2011 because of concern over the thousands of small temblors known as the Guy earthquake swarm, after the town where they appeared after drilling was underway. Similar links have been found to wastewater wells in Oklahoma and near Blackpool, England. U.S. Geological Survey scientists delivered a cautionary report about the relationship between oil and gas production and midcontinent quakes in the U.S. at the 2012 SSA meeting in San Diego. Then there’s the growing evidence of a relationship between fossil fuel usage and global warming. Whatever the research finally tells us, geological consciousness is rising, as is the realization that not all the actionality on the world stage is human.