Every machine, in the first place, is related to a continual material flow that it cuts into.

Cubits Gap is a major subdelta of the Mississippi River. The gap formed in 1862 after an oyster fisherman, Cubit, and his daughters excavated a small ditch in the levee between the River and the oyster-rich Bay Ronde. Intending to make an easier portage for their rowboat, they created a small crevasse. In springtime, meltwater poured through it. Six years later the crevasse was 2,427 feet wide [Ref. 1]. By 1940 a landmass larger than New Orleans had been created and the Bay Ronde had completely disappeared. Today the Cubits Gap subdelta is 40,000 acres of National Wildlife Refuge and is quickly subsiding back into the Gulf of Mexico, a microcosm of the dynamism and potentiality of the Mississippi River as the great land making machine [LMM].[1]

This LMM built the Mississippi Delta over the last 5,000 years with the massive slurry loads it transports from the heart of the continent to the Gulf of Mexico. It is estimated that before 1930, this load was about 400 million tons of sediment per year [Ref. 2]. Since 1930, this load has decreased significantly. Current estimates range from 145 million to 230 million tons per year. This reduction can be explained, in part, by the 1936 Flood Control Act and the decision by Congress to reconstruct the river as a flood control and navigation system on a continental scale.[2] Despite this massive reduction, the LMM still discharges sediment at a rate roughly equal to that of the next six largest rivers in the United States combined [Ref. 3]. Most of this sediment is no longer used to continuously build the delta. Rather, thanks to the 1870’s engineering of Capt. James Eads, it is shot out into deepwater in the Gulf of Mexico.[3] Since 1930 a landmass approximating the size of Delaware has been lost from the Louisiana coast [Ref. 4]. But the potential of the LMM remains.

Human settlement at the site of New Orleans has occurred under four different empires: Mississippian, Spanish, French, and American. During the first three, settlement took the form of commercial and military outposts rather than population centers. Each regime imposed different techniques and practices for living in the shifting, volatile geology of the region. The French and Spanish, beginning with DeSoto’s ill-fated expedition and Bienville’s Dilemma,[4] focused on mapping the delta and its network of lagoons, channels, islands, swamps, and forests. The result was the construction of a strategic geography of trade and defense. Though the maps belied a certain bias towards geological stasis¬, a wildly inappropriate assumption in the delta, they enabled a series of settlements, battlements, and canals for transportation and drainage. In 1803, the city was important but small. Its heterogeneous population of 8,212 included French, Creoles, Spaniards, Cubans, Mexicans, Acadians, Anglo-Americans, British, Haitians, and Canary Islanders in addition to free blacks and slaves [Ref. 5].

With the advent of the American Empire in 1803, the widespread adoption of the steamship beginning in 1811,[5] and the water navigation boom of the 1820’s-1850’s, pressure built to remake the city into a population center. This was fully realized a century later with the invention of the Wood Screw Pump in 1913 and the construction of US Army Corps of Engineers flood control systems in the 1930s and 1940s. These strategies allowed the population to spread from the old levees into the low-lying swampland between the river and Lake Pontchartrain; between 1810 and 1950 the population grew from 17,242 to 570,445. [Ref. 6]

But what about that fourth empire[6] -- the Mississippians? What was their regime for settlement in the Mississippi Delta? Little of their legacy is now legible: we have the fantastical Mardi Gras Indian tradition and the names of a few geographic entities, including “Mississippi.” They were a fragmented and fractious society loosely associated and bound together through cultural practices, trade, and their environmental situation. The Mississippians were a “mound-building people,” a fact that is particularly relevant to the discussion of a geologic turn in urban settlement. While laden with cultural significance, these mounds can also be seen as a dispersed, cellular infrastructural adaptation to the dynamic geological condition of the Mississippi Delta. 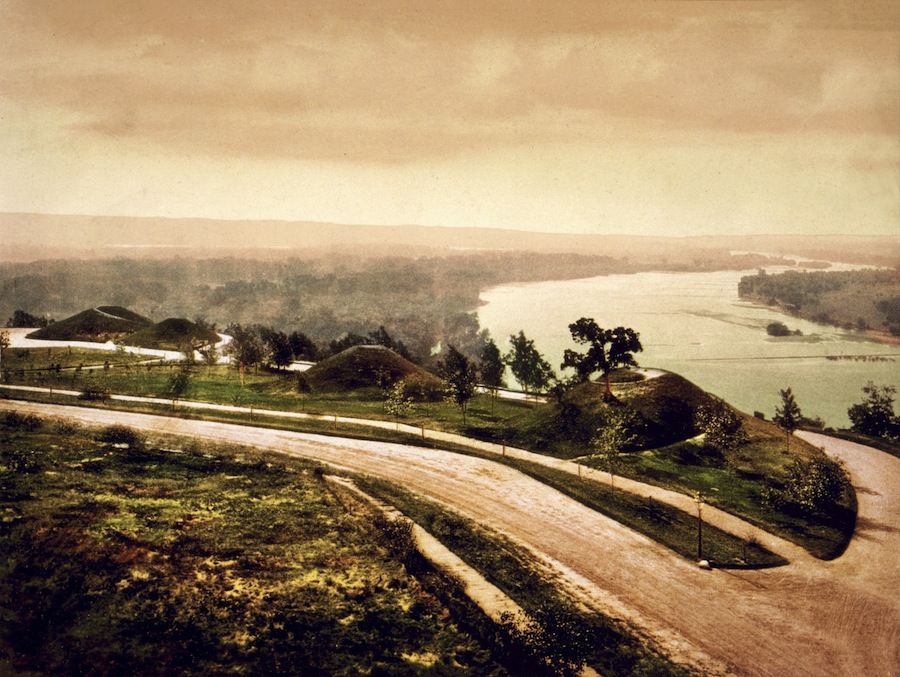 Indian Mound Park near St. Paul, Minnesota in 1898
Image from the Library of Congress

The imperial capital of the Mississippians was Cahokia. At its peak, it was the largest settlement on the continent north of Tenochtitlan, present-day Mexico City. Its most visible legacy is the famous mounds located outside of present-day St. Louis. They are an exemplary instance of the mounds that can be found throughout the Mississippi basin. Popular and anthropological interpretations of the mounds have varied wildly through time. The most interesting theory posits that they functioned as a place of refuge during floods. In a 1927 issue of Science, the year of a great Mississippi flood, an article titled “Indian Mounds as Flood Refuges” reads:

The thousands of terror-stricken people who have taken to Indian mounds to escape the flooding Mississippi waters are showing scientists how the Indians probably used these earthworks which they built in pre-Columbian days.

“The buildings [on top of the mounds] were probably temples, altars and the habitats of chieftains,” said [anthropologist] Dr. Kidder. “In time of flood a mound could accommodate the entire tribe, most of the members of which probably lived in the inundated area.”

Pyramidal in structure, but with a flat top to permit erection of buildings, the mounds are about 150 feet in diameter and some fifty feet high. They are largely confined to the flood area of the Mississippi. [Ref. 7]

This practice of mound-building varied but was endemic throughout the empire, from a few small hills near Kincaid, Illinois to the imperial complex of Cahokia to the impressive shell middens of the Louisiana Delta. They were not only burial sites, giant cosmological clocks, or the temple of the high priest; they were a multifunctional networked infrastructure–the construction of the territory as an articulated surface for resisting periodic inundation.[7] They were places of refuge and gathering during floods.

New Orleans is a city of two topographies -- high and low. While subsidence, real estate values, unemployment and vacancy are all extremely high in the low city and aging infrastructures are failing, the opposite holds true for the parts of the city on the high ground near the river.[9] The case of St. Anthony neighborhood is instructive. The area sits six feet below sea level and sustained heavy flood damage during Hurricane Katrina. With an average annual subsidence rate of 5 mm and a rise in sea level of 1-2mm per year [Ref. 8], the neighborhood may be nine feet below sea level by the year 2100. The neighborhood also suffers from high levels of residential vacancy with 38% of properties currently vacant [Ref. 9].

Despite these challenges, the city has two powerful allies: the fecundity of the delta, and the Land Making Machine. A strategy that activates these resources while drawing cues from the historical imperial regimes of the delta might offer a way to reconstruct the low city. Through the recovery and instigation of cultural practices, the low city might be reconfigured in the next generation not solely as a population center, but also as a vibrant and unique urban outpost within greater New Orleans.

Provisional: Of, belonging to, or of the nature of a temporary provision or arrangement; provided or adopted for the time being; supplying the place of something regular, permanent, or final. [Ref. 10]

The fecundity of the delta has long been a primary economic source in the Mississippi Delta. Everything grows here, and grows fast. The high rates of vacancy might be worked with in this situation to institute a reforestation program for the low-city, which was once a forested bald-cypress swamp. The rate of growth for southern yellow pine timber species such as pinus elliotii suggests that within a generation, a mature forest could be ready for harvesting as timber pilings. The design of specific zones of forest could provide shaded, low-maintenance recreation areas for the neighborhood and also allow for the establishment of slow-growing bald cypress trees. Evapotranspiration through extensive forestation may also reduce the workload on the municipal pumping stations run by the Sewerage and Water Board of New Orleans. While creating transitional recreational and work spaces, the forest would eventually provide a harvest of timber piles for construction, leaving behind an open, maturing bald cypress forest.

The City as Articulated Surface

The Bonnet Carre Spillway six miles upstream of New Orleans is a critical component of the USACE Comprehensive Flood Control Plan for the Lower Mississippi basin. The spillway can discharge floodwater at a rate of 250,000 cubic feet per second, easing pressure on the levees at New Orleans by sending water around the city and into Lake Pontchartrain [Ref. 9]. An average opening event deposits nine million cubic yards of sediment in the spillway, sediment that must be dredged or hauled away in order to insure proper continued operation of the spillway. An opening event of this size is infrequent but regular, occurring about once per decade since the spillway was first operated in 1937.

The nine million cubic yards [Ref. 11] deposited in a single event would be enough to raise the elevation of the entire neighborhood of St. Anthony by 30 feet. Because both the spillway and the neighborhood border Lake Pontchartrain, barges could be used to cheaply transport some of this sediment. While it is unlikely that all of it could be recovered and transported economically, only a small percentage would be needed to raise strategic locations within St. Anthony enough to counteract subsidence and sea level rise and to withstand future storm surges. Sites that cluster social, educational, health and safety resources could be designed and elevated using poles from the provisional forest and sediment from the spillway. 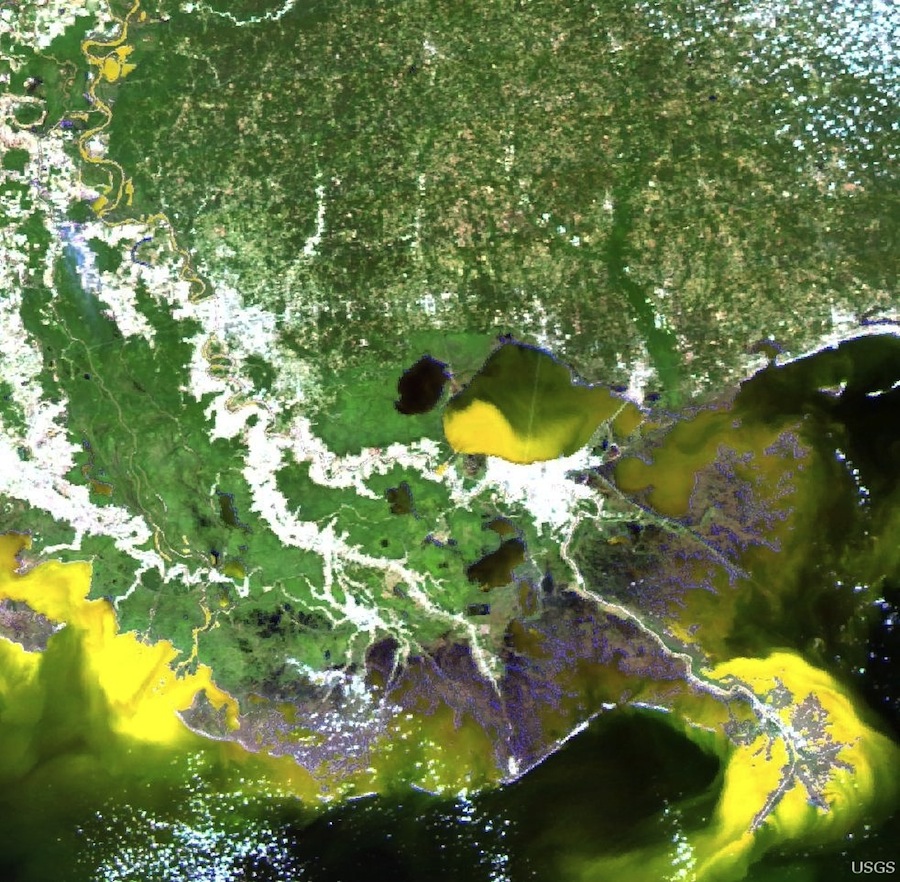 USGS satellite image of the lower Mississippi River basin during the 2011 flood; sediment plumes are shown in yellow; the intense yellow plume in the center is in Lake Pontchartrain, channeled through the Bonnet Carre Spillway.

USACE schematic for the Bonnet Carre Spillway along the Mississippi River, north of New Orleans
Image from the US Army Corps of Engineers

The task of choosing which areas to raise would require involvement of local expertise and sentiment. Blocks with large amounts of vacancy, current city parks, and abandoned school buildings might be ideal candidates, owing both to an ease of acquiring the land and their prominence within the community. A network of work parks and field schools might be developed for the neighborhood, targeted to become elevated places within the city where experimentation, research, and construction is undertaken in partnership with primary schools, recreational centers, local universities, and public agencies.

In New Orleans, new urban landforms-constructed from timber pilings harvested from the provisional urban forest and sediments deposited in the Bonnet Carre Spillways would provide high ground where social, economic, and educational resources could be clustered. The cellular nature of the constructions would allow them to spread and agglomerate over time as more forest matures and the Land Making Machine deposits more sediment. Within two generations, the result would be a synthetic Bayou Urbanism -- the construction of the city as an articulated surface for resisting periodic flooding. 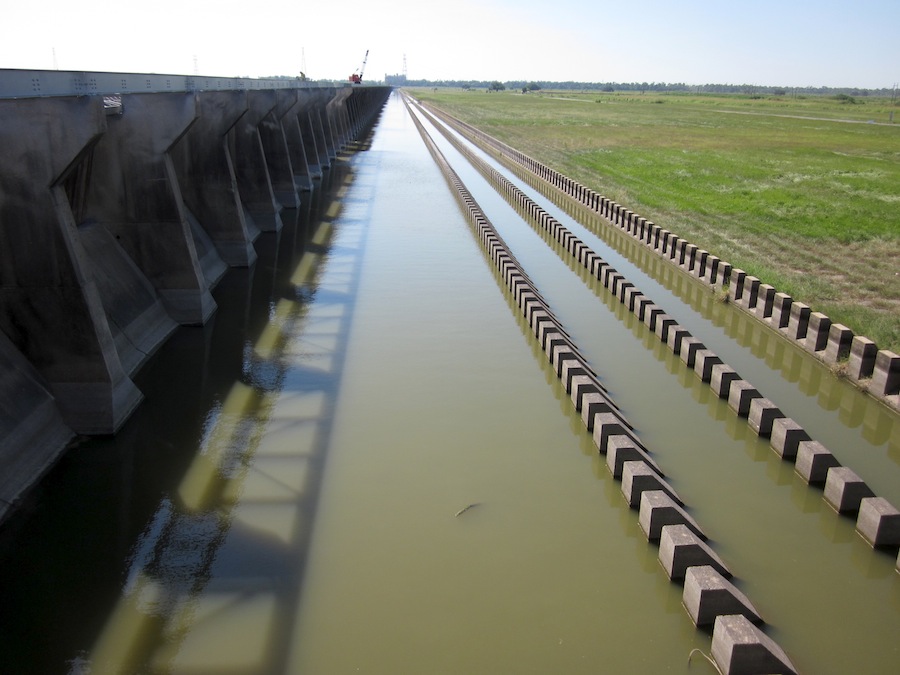