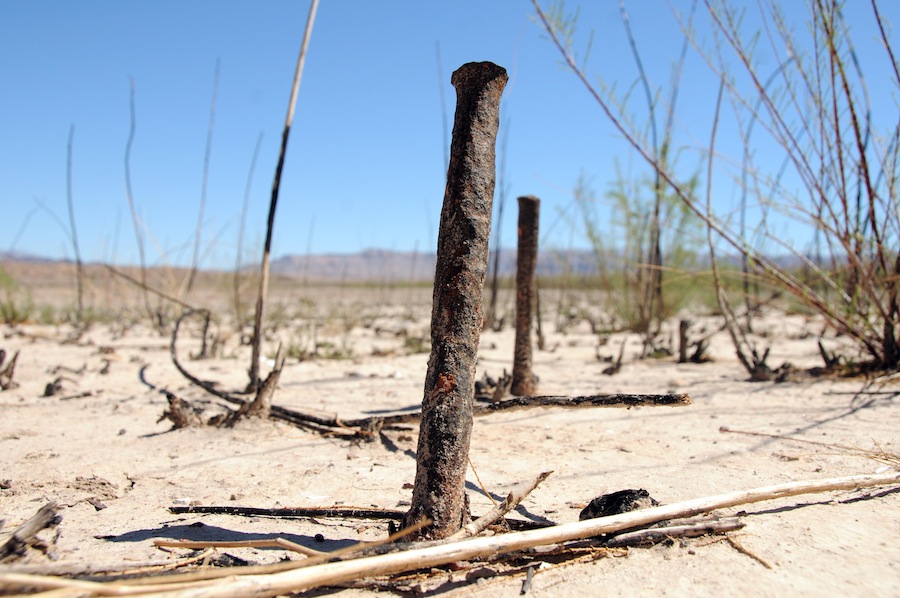 Introduction: How to Name a Place Removed?

What lexicon or neologisms might we use to speak of places removed by human force? Not by natural disaster, like the city of Pompeii or the Japanese fishing village of Minamisanriku, destroyed in the tsunami of 2011.[1] Nor by the horrors of war or catastrophes of technology, as in Virilio's obsession with the accident,[2] like those at Chernobyl and Three Mile Island, or the toxic morass at Love Canal in Niagara Falls.[3] Instead, I consider here what I am calling landscapes of erasure: the large-scale, intentional removal of socio-cultural place through processes of engineering, often due - but not limited - to industries of extraction, power generation, and shipping and transport. That is, I am exploring the erasure of material and socio-cultural landscape by human forces operating at the geologic scale because such scale reveals and magnifies the consequences of human interaction with the land, both intentional and otherwise. 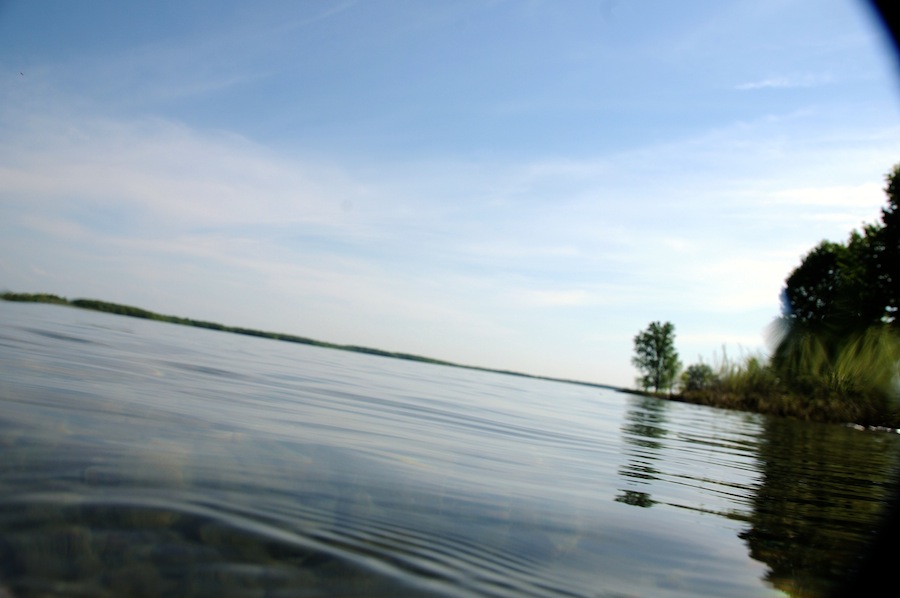 Landscapes of Erasure: Lost Villages of Canada, Lock 21 at Dickinson's Landing under the St. Lawrence River, Long Sault, ON, May 2012.
back to top ↑

Words and Places: Toponyms and Hydronyms

"Local names - whether they belong to provinces, cities, and villages, or are the designations of rivers and mountains - are never mere arbitrary sounds, devoid of meaning. They may always be regarded as records of the past, inviting and rewarding a careful historical interpretation." Onomast and toponymist Rev. Isaac Taylor offered this thought on the legacies of place names in a 1864 essay entitled "Words and Places: Or Etymological Illustrations of History, Ethnology and Geography." Even in instances where "the original import of such names has faded away, or has become disguised in the lapse of ages," Taylor posits, a place name "may speak to us of events which written history has failed to commemorate."[4]

Taylor's text recounts geographic nomenclatures that dot the globe. He cites, for example, the St. Lawrence River, named for the Catholic feast of the 10th of August, when Jacques Cartier discovered the waterway, and implications in the toponym Wales, possibly from the German root wal, meaning "foreign" or "strange." As markers of long-term change, Taylor claims that place names are symbols signifying such socio-cultural shifts as "emigrations, immigrations, the commingling of races by war and conquest, or by the peaceful processes of commerce." He also posits place names as indicators of geologic change, stating that: "Vast geological operations are still in progress on this globe; continents are slowly subsiding at the rate of a few inches in a century; while new lands arc uprising out of the waters…[b]ut these changes, vast as is their aggregate amount, are so gradual that generations pass away without having made note of any sensible mutations. Local names, however, form an enduring chronicle, and often enable us to detect the progress of these physical changes." He lists a number of examples: former ports, like Stourmouth, Chiselet, and Fordwick, on what are long-receded estuaries of the Thames; the towns Holbeach and Wisbeach, now miles from the oceans that once gave them their names. As well, he explains, the tides no longer reach the town of Tydd and the "Black Forest in Argyle is now almost entirely destitute of trees." For Taylor, though the forces of culture and geology are ever at work altering histories and the landscape, the etymology of place names, lingering on maps and in regional parlance, illustrate what once was, even when place itself has been altered or erased beyond recognition. 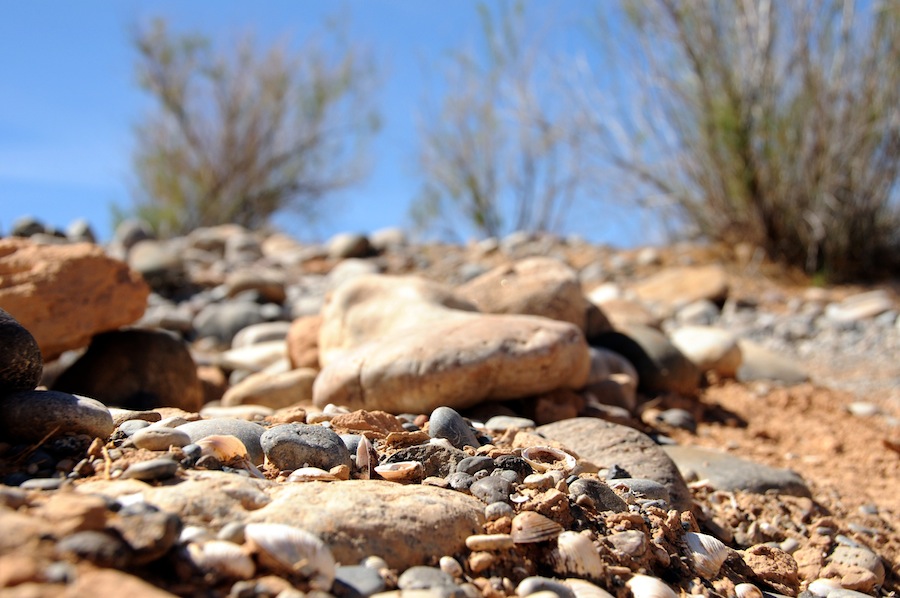 Landscapes of Erasure: Lost Villages of Canada, Lock 21 at Dickinson’s Landing under the St. Lawrence River, Long Sault, ON, May 2012.
back to top ↑

The Destruction of Place as Production of Space

The power to name place dwells in the domain of the socio-cultural, while the power to produce and eradicate the terrain exists in the realm of the material. Acts of geology, weather, and climate create and destroy geography in mere instants and over epochs. When a volcano along a volatile fault line deep under the Pacific Ocean erupts into an archipelago, explosions of molten rock form islands that, after millions of years, tower above the sea floor. However, as has been debated for nearly half a century by geographers and cultural theorists, the production of place lies elsewhere. [5] Crowned by its eventual flora and fauna, the place we now call "Hawaii" does not exist until the geologic collides with the socio-cultural. Conversely, if predictions about global climate change are correct and sea levels are rising, a similar set of oceanic islands might someday disappear beneath the waterline, effectively erasing place from the landscape.

The human potential to produce and eradicate both place and terrain now rivals the geologic. Engineering, warfare, and industries of extraction produce and remove landscape and land masses at increasingly greater scales. Just as shifts in plate tectonics over millions of years might result in an archipelago, a developer in Dubai has piled millions of tons of fill into the ocean to produce a set of islands in the shape of a palm tree, marked by the place name "Palm Jumeirah."[6] Or consider the destructive power unleashed during World War II, where atomic power destroyed Hiroshima and Nagasaki but even conventional firebombing reduced the cities of Tokyo and Dresden to ashes. [7] Despite the increasing scale of potential for material erasure of landscape and terrain, erasure of place is not a new phenomenon, as socio-cultural processes have been in constant flux from whatever point we choose to measure the start of "human history." Over time in urban, rural, and even "wild' space, rivers are diverted, ponds drained, malls constructed, casinos imploded, forests burned, crops grown, oceans polluted, reservoirs created, clouds seeded, cathedrals erected, villages sacked, neighborhoods gentrified, libraries filled, satellites launched, histories forgotten, immigrants deported, businesses turned over, invasive species introduced, indigenous people displaced, and landmarks renamed.

Thus, what lexicon do we use to discuss such changes to the landscape? For example, how do we speak of the phenomenological vestiges of Kaixian, an 1,800-year old city of thousands, erased from the landscape under the waters of the Three Gorges Dam?[8] How do we classify a toponym like Kayford Mountain, in West Virginia, memorialized in place name on maps, in databases, and in collective memory, but whose referent has been entirely removed from the viewscape by a mining process called mountaintop removal?[9] What are the Lost Villages of Canada, once a series of towns, like Milles Roche, Wales, Moulinette, or Maple Grove, in Southern Ontario, if their remnants now rest seventy-five feet below the surface of the St. Lawrence River - yet their place names mark a series of islands produced by the dammed waters of the St. Lawrence Seaway?[10] Where am I, precisely, when I stand atop the stone foundation of a hundred-and-fifty year old building in St. Thomas, Nevada, a site that, until a decade ago, was submerged under thirty-five feet of water and, eighty years ago, was razed to make way for a man-made lake in the Southwestern American desert? And as if the erasure of place were not complex enough, the ghost town of St. Thomas has now returned to its place due to a decade of drought and the evaporation of Lake Mead. [11] These are the landscapes of erasure to which I am drawn.

Central to the appreciation of landscape in contemporary Western thought are the writings of John Brinckerhoff Jackson, whose contributions were foundational to what has come to be called "cultural landscape studies."[12] In the first chapter of his 1984 text Discovering the Vernacular Landscape, Jackson traces usage of the term to art history, which he states defined landscape as the "portion of land which the eye can comprehend at a glance."[13] Jackson further notes that the term did not refer to material space set out before the viewer but to the representation of space as captured by the artist. After stating that landscape is "a space on the surface of the earth," "a concrete, three-dimensional shared reality," Jackson calls for a new definition: "a composition of man-made or man-modified spaces to serve as infrastructure or background for our collective existence."

Much work in the field of cultural landscape studies argues for the value of the ordinary.[14] As Paul Groth argues in the first chapter of the 1997 compendium Understanding Ordinary Landscapes, "the high-style cathedral or office tower, as well as the Depression-era Hooverville hut, a farmer's barbed-wire fence, or a kitchen garden" are all components of the landscape. [15] Landscapes of erasure, as I am defining the term, are not unequivocally "ordinary." Producing them requires colossal feats of engineering: the dismantling of whole towns, the damming of major rivers, or the removal of entire mountain ranges. But the remnants, the landscapes that remain when physical production has ended, are certainly banal. In the case of St. Thomas, a row of blackened tree stumps and bleached-white foundations rest amidst an otherwise red and orange desert. Milles Roche and the other Lost Villages of Canada are invisible under the waters of a large bay, unless the viewer is prepared to dive deep. From most vantages, Kayford Mountain is merely a missing peak from the viewscape - unless you view it from above. Even then, the spread of rubble and sod often cap mountaintop removal sites to create rolling green lumps suitable for golf courses and strip malls where sublime peaks once stood.[16]

Landscapes of Erasure: Strip Mine beneath Paint Mountain Ridge, Willis Branch, Fayette Co., WV, May 2012.
back to top ↑

How, then, do we speak of places like Kayford Mountain when the mountain is gone? The visible landscape, treated like a geologic palimpsest with a possible supermarket, health center, or gas station scribbled into the space where once a sublime peak towered above the horizon, will disclose nothing of the complex socio-cultural history embedded here. The place name, however, bequeathed centuries ago to a now-missing mountain, may linger on maps and in the toponyms marking new places produced to fill this space. Imagine Kayford Boulevard, Mountain View Health Center, Green Valley Dry Cleaners, or Peak Gas & Go, seemingly incongruous within a rolling landscape of subdivisions and lawns, but, as Taylor would suggest, markers that once there was a mountain here.