These images are from Drawn to the Edge, my solo exhibition at the New Orleans Museum of Art (June 15 to September 9, 2012). In many ways the work is an attempt to capture time -- to explore how today's New Orleans is profoundly connected to its past and to consider how quickly we seem to be running out of time.

During a six-week residency this spring at A Studio in the Woods (ASITW), which is located on a bend of the Mississippi River just east of the city center, I looked at the history of the place, focusing my research on the city and its relationship with the river, through both the slow processes of geologic time and the rapid changes of the 20th and 21st centuries. I quickly came to see that New Orleans' history is fundamentally connected to its underlying geology, more so than any other place I've ever been. Five thousand years ago, there was no land where New Orleans is today--it was all open water. Slowly over the millennia, the alluvial plain of southern Louisiana was created as the Mississippi River dropped sediment along its meandering path to the Gulf of Mexico.

I discovered Harold Fisks's Geological Investigation of the Alluvial Valley of the Lower Mississippi River in which he charts the course of the river. These beautiful maps show the river as a living thing--changing course, snake-like, over the centuries. This powerful force created most of the land south of Baton Rouge. 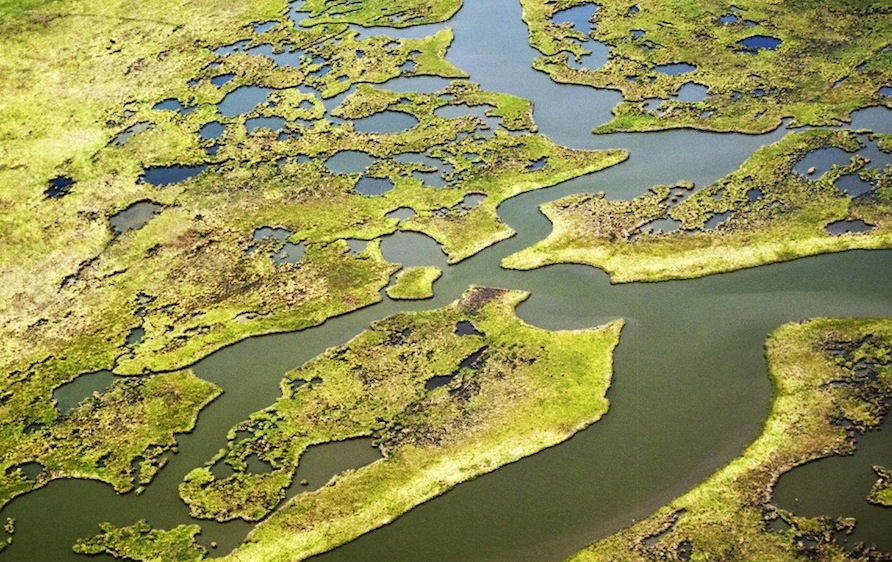 Today, the lower Mississippi River is hidden behind concrete levees and locked into position, unable to follow its natural course. The bayous and channels within the city are mostly covered with cement and kept buried underground. I went in search of the invisible river and was lucky to have Monique Verdin, a Houma native and photographer, as my guide. She told me that the understanding of her community's vulnerable situation has greatly deepened since Katrina. I heard this from many other locals. It is now common knowledge that the city is intrinsically connected to its geological past and muddy foundations. In the complex man-made system that is New Orleans it has become clear that we are both separate from and enmeshed within the natural world. The physical environment inherently limits our technological activities, yet we also possess agency and a capacity to modify our surroundings. We are becoming indistinguishable from "nature."

I met locals who work with land and water and I went on expeditions to places like Cocodrie and Venice, Louisiana. I saw the extent of the problems inherent in the landscapes there, which are literally disappearing. Much of this is due to the activities of oil and gas prospectors. Since the 1920's, they have cut thousands of miles of channels through the wetlands, allowing salt water in. As the salt water spreads, it kills the cypress ecosystem, leading to erosion on a vast scale. I kept finding myself standing at the edge of the land, looking at where the water and earth touch, seeing water lap over now obsolete man-made surfaces. I felt a constant, palpable sense of foreboding.

Seeing from above was essential. I took hundreds of aerial photographs during a breathtaking tour in Charlie Hammond's little Cessna[2]. To follow our flight using Google Earth: zoom in on New Orleans, then fly south-west to Houma, veer south-east to Wonder Lake where you can hover over Exxon Company Road and notice all the straight lines cutting through the wetlands, then follow Montegut Road south to Little Caillou Road and then Cocodrie -- the end of the road. Continue flying south and out into the Gulf of Mexico, over some oil and gas platforms (which you won't see on Google Earth as none are visible -- all strategically erased), and over Isles Dernieres Barrier Islands. Flying along the ragged edges of this country, it's easy to spot man-made channels: all the straight lines. Riddled with these, as well as natural channels, the land resembles a piece of lace, or a disintegrating, moth-eaten cloth. 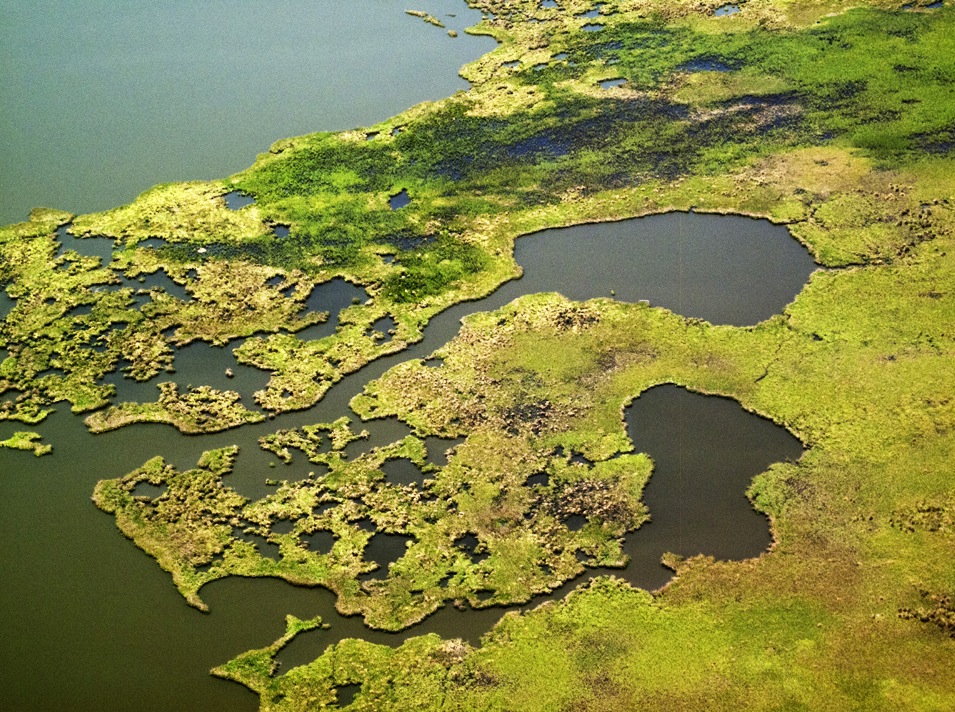 When I was invited to create a work for the New Orleans Museum of Art, I immediately thought of these "edges" where the man-made meets the organic, where today meets yesterday, ten thousand years ago, and tomorrow, and where solid meets liquid meets air. The exhibition title, Drawn to the Edge, also alludes to some of my other preoccupations: the exploration of drawing in all its forms, the potential to draw an object while wondering what an object is anyway, and, perhaps most poignantly, the examination of our relationship with the natural world in this age of the Anthropocene, when so many species are drawn to the edge of extinction.

Sculptural in their scale, my drawings for NOMA are all double-sided, made on canvas. Ten and twelve feet tall, they range from sixteen to thirty-six feet long. I used simple materials to draw--graphite, charcoal, chalk, black oil stick, and sediment that I collected from the banks of the Mississippi River.

Found Islands depicts, on one side, a charcoal line drawing of Pine Island, which existed 4,500 years ago where New Orleans is today, while the other side features a drawing, made using a light sediment wash, of a contemporary island in Creole Bay formed by the combined processes of man-made events, sediment accumulation, and encroaching salt water. 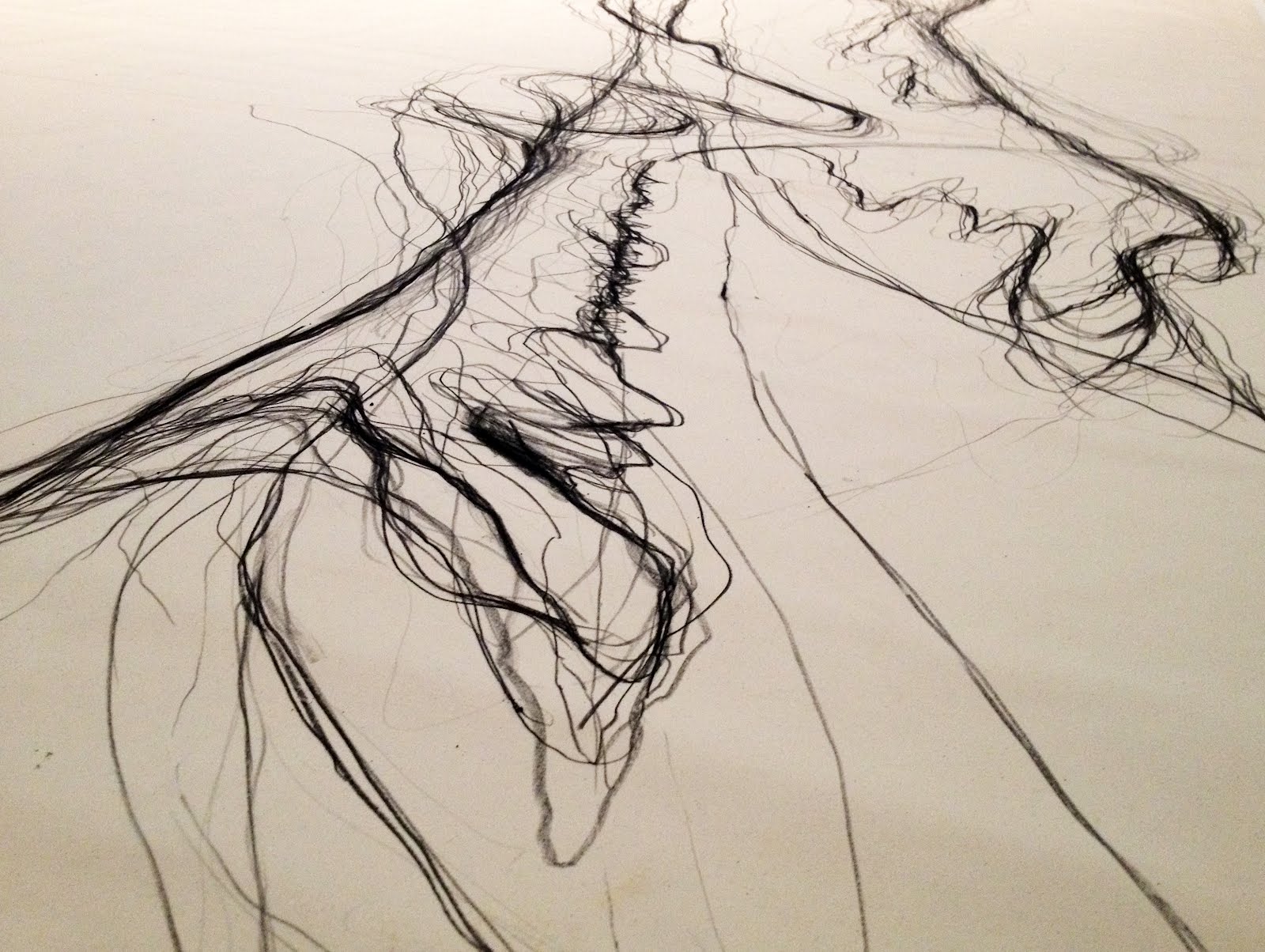 The narrative within Drawn to the Edge is important and the titles help locate the viewer. For example, one drawing looks like a night sky, but the title is Constellations (maps of Louisiana oil and gas wells), so you realize that each of the many thousands of little dots is in fact a well--the seemingly cosmic turns out to be a human-made manifestation of the underlying geology.[3] I made the drawing using chalk from the Cretaceous era. I collected the chalk during an expedition to western Kansas when I walked along the former ocean floor of the Inland Sea. Kansas is not a place widely regarded as being intrinsically linked to southern Louisiana. But water from there joins water from about fifty percent of the US interior to flow into the Mississippi River. Sediment from places as far away as Pennsylvania and Montana finds its way downriver. In the spring of 2011, a full year before I ended up in New Orleans, I was on a residency at the Salina Art Center researching water and its relationship with the city of Salina, Kansas. I met with locals such as Stan Cox, a biologist at The Land Institute, who were quick to point out that all the water and runoff from the fields there in Kansas would run into the Mississippi and contribute to the "dead zone" in the Gulf. I didn't know it at the time, but it was all connected to my future research in Louisiana.

As a failed physicist, I'm drawn to the macro and micro view of things--self-similar patterns found on different scales, across the physical landscape as well as through time. The shape of river deltas is found to repeat at scales all the way down to cracks in the mud. We see this in man-made as well as organic structures. A simple underlying mathematics to it all.

In a series of drawings called Sun Clocks, I drew the outline of my shadow every hour on the hour. The fundamental, yet often overlooked, action of the Earth spinning on its axis is recorded through the simple action of drawing my own shadow.

City (New Orleans) is a small animated drawing that charts the city's growth from its founding in 1718. By scanning the drawing continuously during the process of making it, the finished animation shows the city expanding to its present density and contracting back to its origins in an endless loop, timed to mimic the pace of a human breath--the course of several centuries is condensed to seven seconds.