Blank Stare:
(10 images and corresponding notes on the pensive in photography and its utility in the face of catastrophe, as excerpted from A History of the Future) 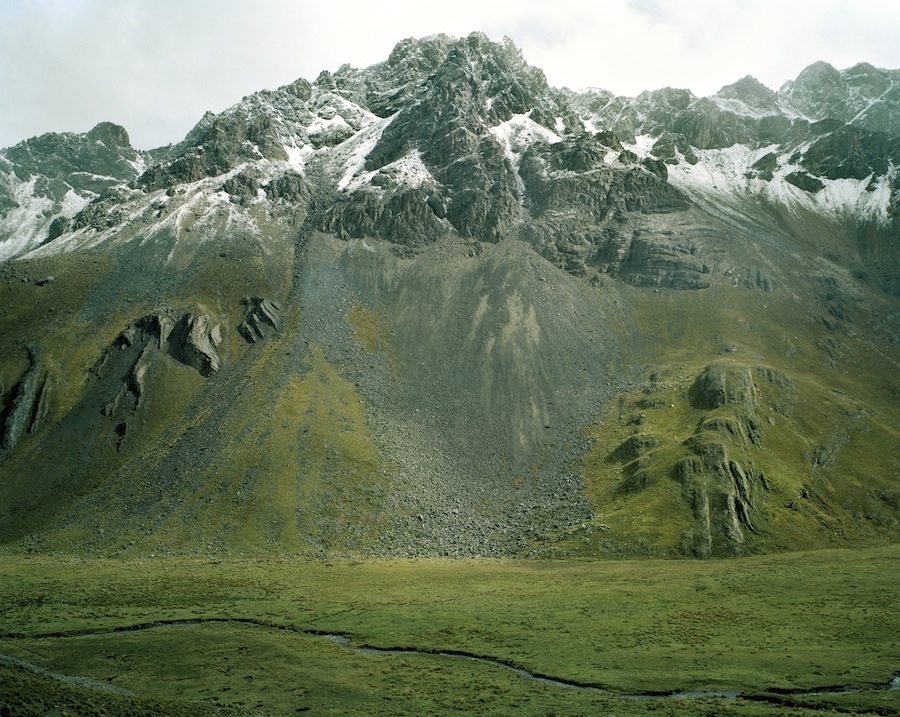 Most of us barely know how to read the land. But once you start to learn, even a little, you are confronted everywhere with absence. You are drawn back into the past, and this seems, at first, the only direction you can go. You see glaciers in the striations on the stone, the flatness of the valley at the foot of the mountain, the melt water, the rocks left in a field thousands of years ago by the withdrawal of a nearly unimaginable force. Yet, feeling the past in this way is like taking a few, hard steps up a hill, gaining elevation from which you ultimately hope to see in all directions, even the future… 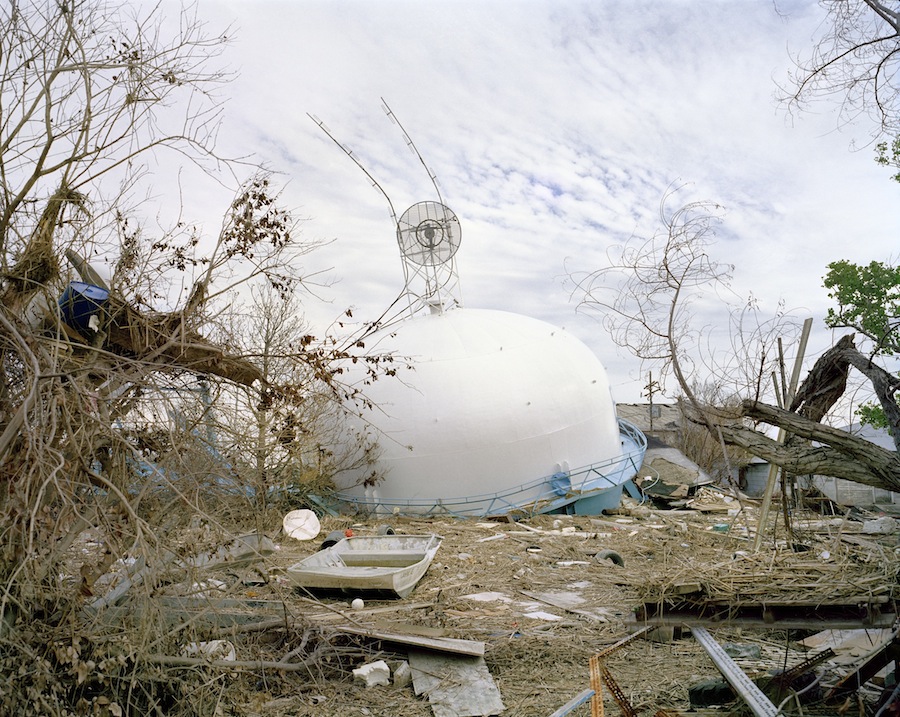 Each photograph in this essay is a landscape. Each was taken between November 2005 and June 2010 under the aegis of The Canary Project, a collective that produces art and visual media that deepen public understanding of climate change. In keeping with this utilitarian promise, the photographs have been exhibited on the sides of busses, on billboards, in school presentations, in science museums, city halls, as well as in art museums and galleries.

The malleability of the photograph, its adaptability to various vernaculars and its general legibility, is one of the main reasons we decided to work in the medium given our intent to impact a broad public. Everyone feels comfortable approaching a photograph and has an idea what to do with it, but not everybody knows what to do with a painting or a sculpture or a video.

The meaning of our images depends on their context within a specific mode of exhibition and the position of that mode within a larger discourse about climate change. This discourse has many registers: scientific, journalistic, activist, and artistic. In the aggregate, the photographs form an archive and can be positioned as evidence (i.e. they can serve one register of the discourse or another, depending on how and where they are shown).

And yet, in their idealized state, stripped of context and viewed individually, the same photographs form a blank stare. Liberated in this way, they present a much bigger challenge to the viewer as their meaning is more indeterminate. In this state the photographs float and are pensive. They are shameless in their repose, even in the face of catastrophe. 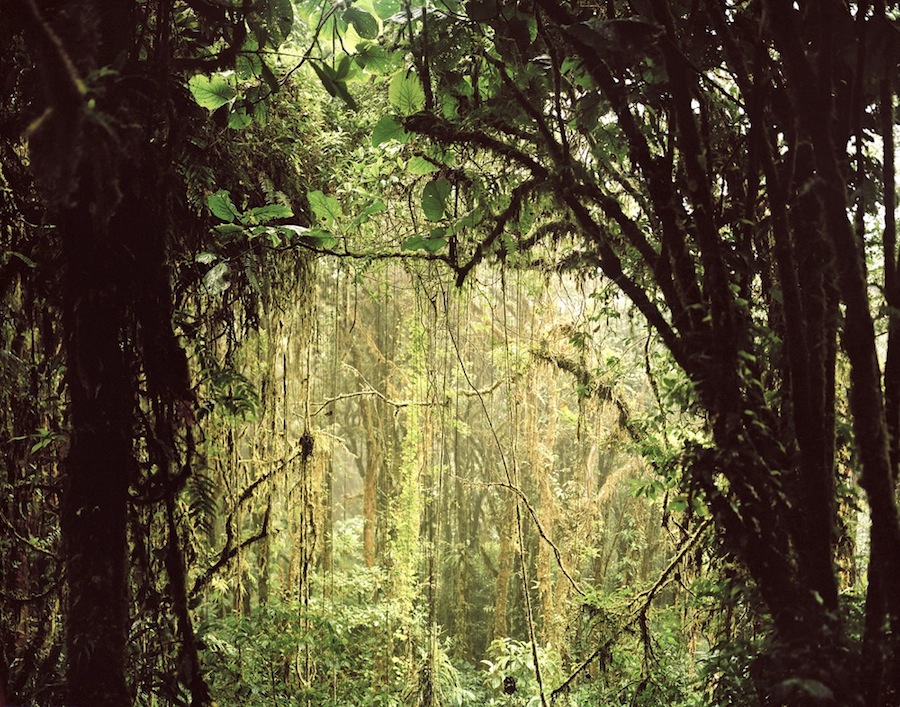 Pensiveness is not some special characteristic of our photographs. Pensiveness is at the core of all photographs, which despite the digital age, continue to carry the aura of a reminiscence as their ineluctable modality. They are an index. They point to the past, or more precisely to a discrete moment of the past. This, then, there. Photographs will not lose this connotation so long as they are the primary method for recording and sharing everyday events.

In the sequence that we put together for this book, we focused the innate pensiveness of the images on a topic that we believe is absolutely central to understanding climate change, but which may appear tangential: appreciating the vast differential between human history and geologic history. 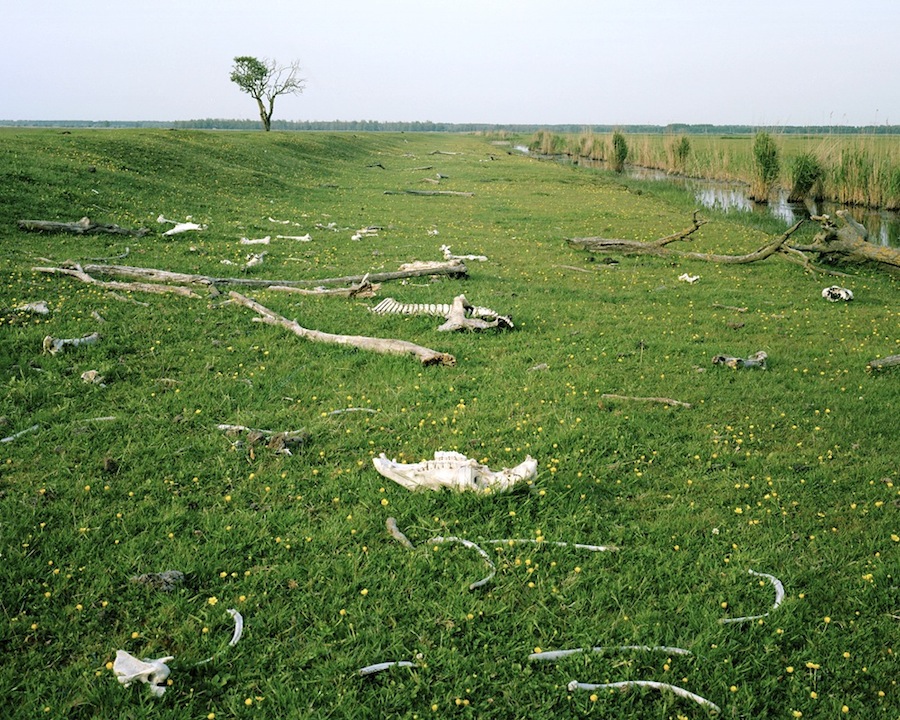 It makes you schizophrenic. The two time-scales -- the one human and emotional; the other geologic -- are so disparate. But a sense of geologic time is the most important thing to get across to the non-geologist . . . . A million years is a small number on the geologic scale, while human experience is totally fleeting --- all human experience, from its beginning, not just one lifetime. Only occasionally do the two time scales coincide.

These two histories, the geologic and the human, coincide decisively in climate change. It has the potential to be the final chapter in human history, but geologic history has no comprehensible end. 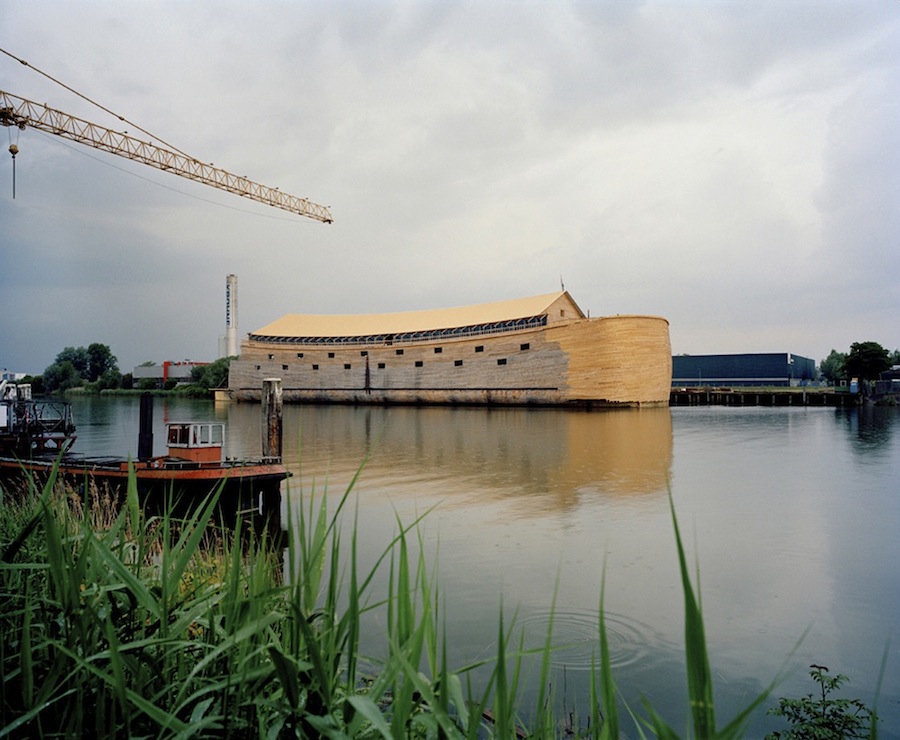 The photographs are from Peru, Antarctica, Niger, New Orleans, and The Netherlands. The very names of the places connote a particular history, a part in the human story. Obviously, we cannot capture that history or explore it any detail in such an essay, but we can encourage the imagination of it. Because photographs have reminiscence as their ineluctable modality, they stimulate the imagination (What there? What then?).

But more than this: because photographs trigger a memory reflex, the scene they depict inevitably takes on a personal significance that is like a shadow and cannot be fixed precisely. This is an unconscious mechanism, silently nagging the viewer (“Where does this fit in my life? Was I there?”).

The places are also, of course, points on the earth, coordinates in what we call our environment, that which envelopes us. In this sense they are part of a different history, but one that is much harder to comprehend, the story of a planet that has existed for more than 4 billion years before humans. This too is part of our collective unconscious. 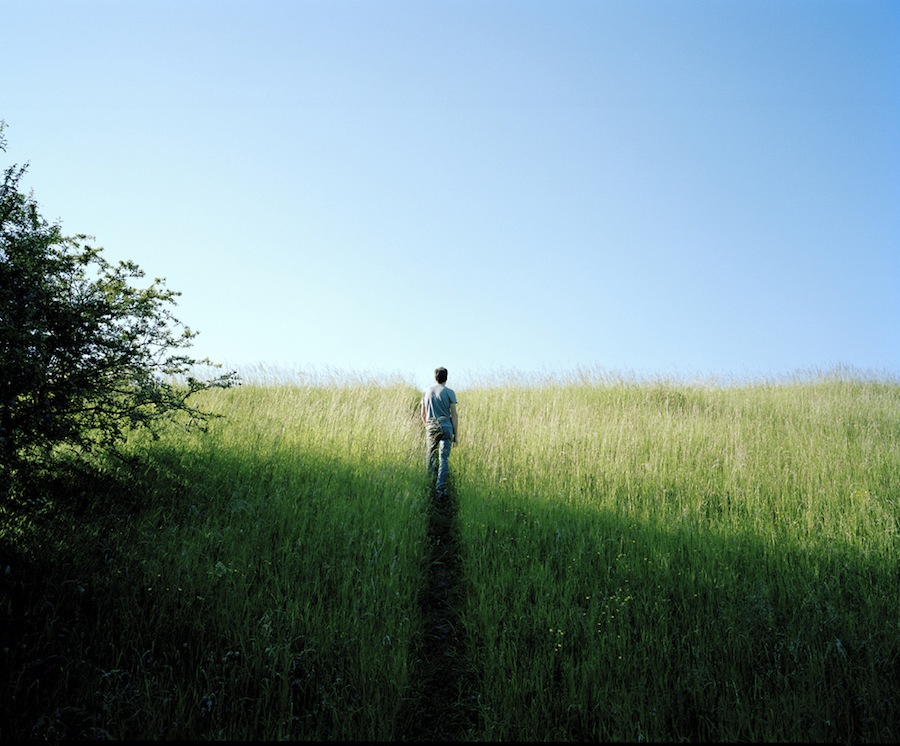 The photograph, whatever its limitations, has one distinct advantage as a medium to encourage mediation on the deep past: Its momentary nature (the thinnest veneer of time available: the instant) sets in stark relief the time-based phenomenon we hope to elucidate. Always a memory, but in this case, a memory that extends beyond the realm of human experience. 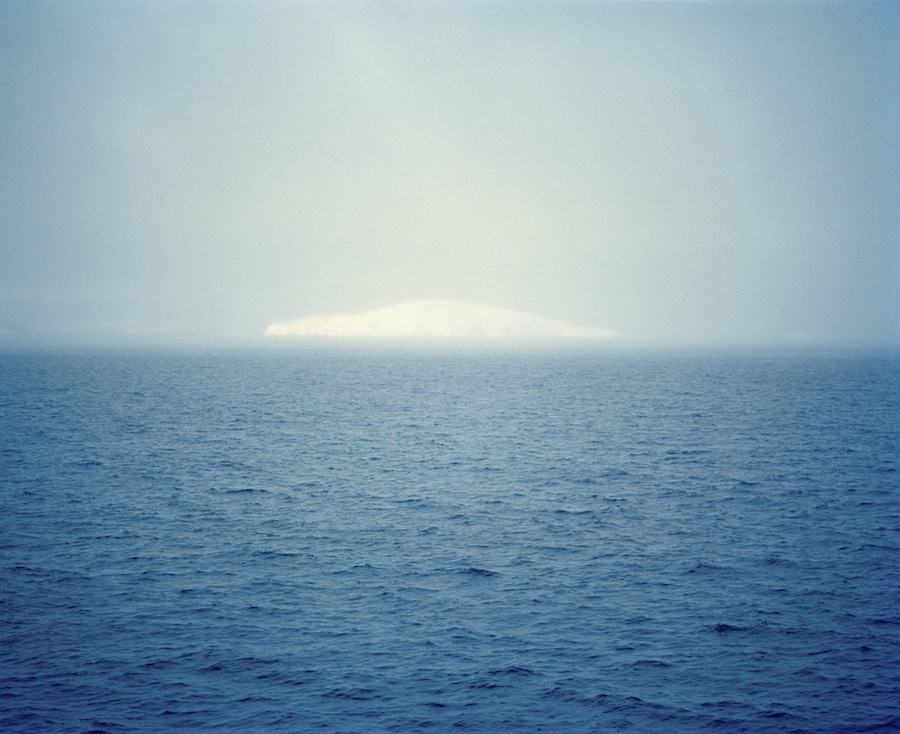 In the field, we had two choices: 1) dramatize the landscape in some way, such as indulging in a myth about damaged earth, in an effort to activate feelings of indignation, disgust, wonder, or dismay (whether or not this motivation is frankly admitted or not); 2) confess to a feeling of incomprehension, disorientation, loss of scale, seduction, and panic. One is a gesture of mastery, and the other of submission.

Most photography dealing with environmental themes employs some version of the former strategy. You can see this technically in the color saturation, the single-minded themes, the bold compositional choices which preference symmetry, and an elevated perspective that is dehumanizing and gives the impression of omniscience. You can also see it in the way the work is framed and discussed, usually in the vein of heroism. In other words, most landscape photography has still not escaped the long shadow of Ansel Adams. 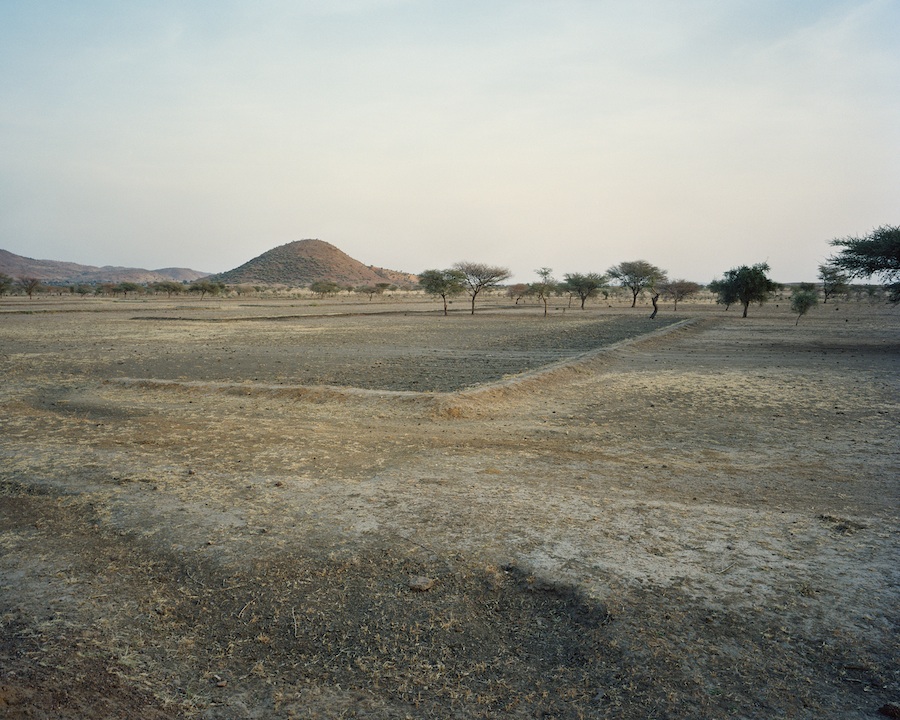 “Parallelism between stepping back in time (Historicism) and moving out in space (Exoticism). . . The sensation of exoticism: surprise. Rapidly dulled…I conceive otherwise, and, immediately, the vision is enticing. . .”

“The sense of a non-anthropomorphic nature, a nature that is not superhuman but ex-human and from which all humanity – strangely! – is derived — this sense of nature’s exoticism only emerged from the understanding of the forces and laws of nature.”

Adherence to the lofty formal techniques of Adams’ is not incidental; it is part and parcel of a philosophical outlook that regards Nature as transcendental, “a religious idea” (to quote Adams himself). Most contemporary landscape photographs tend to be more self-consciously ambiguous in their statements of purpose, yet still operative is the underlying dogma that nature and man are opposed and that, as such, we are damaging Nature. This leads to a simplistic symbolic order, which is often evident in the compositional structure of the photographs. More significantly it also leads to adamant disavowals of any political intent or responsibility to the works. Such work creates a (visual) sanctuary and a locus of mourning that dispenses with any need to act. It assumes no future or at best longs for a future that is conservative, a future where wild places are preserved with only privileged access.

Against this tendency, we felt a perverse attraction to the following idea of nature that is even older and more out-of-vogue:

To see landscape thus, as something distant and foreign, something remote and unloving, something entirely self-contained, was necessary. . . . For we began to understand Nature only when we no longer understood it; when we felt that it was the Other, indifferent towards men, which has no wish to let us enter, then for the first time we stepped outside of Nature, alone, out of the lonely world. . . . Nature was more permanent and greater, all movement in it was broader, and all repose simpler and more solitary.[1]

Whatever this romantic perspective lacks in terms of sensitivity to humanity’s position as part of an ecosystem or foreknowledge that we would come to call this era the Anthropocene, it is perspicacious and intellectually rigorous on one point: the supreme indifference of the inorganic world. The most unexpected phenomenon for us in undertaking this project was to travel to these places that scientists had identified as harbingers of catastrophe and finding them so devoid of any clear sign of danger. The land was just there, imperceptibly changing.