The Uneven Time of Space Debris 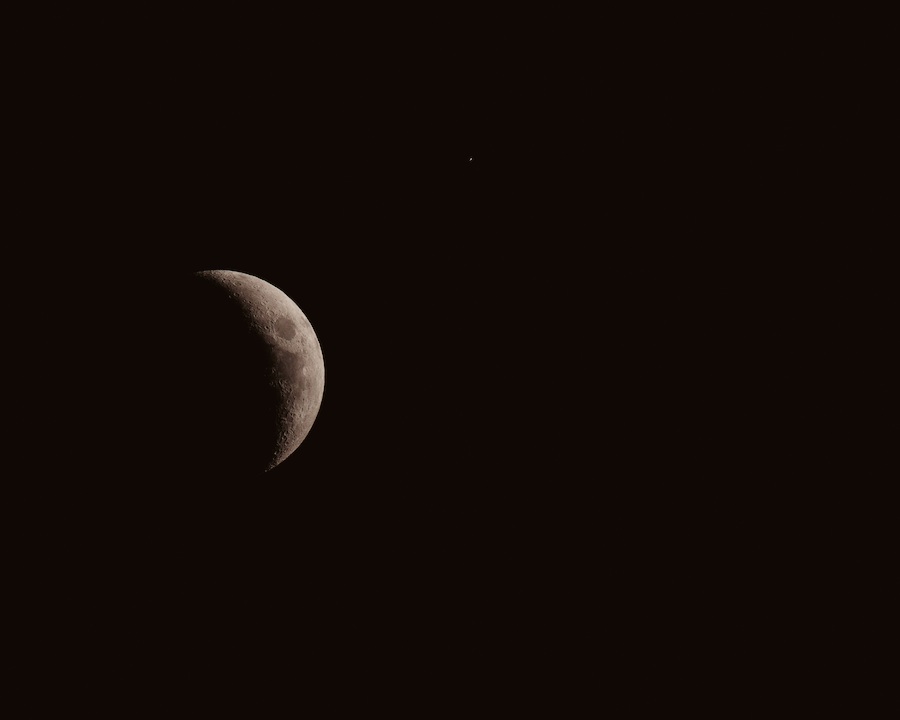 Trevor Paglen's work, entitled Debris, is a series of photographs of man-made debris, garbage, and flotsam in earth's orbit. It shows spent rocket bodies, inactive spacecraft, and satellite fragments caused by collisions and explosions. Much of this debris will outlast humankind's presence on the planet.

SMUDGE: We see your work as signaling what we are calling a "geologic turn" in contemporary cultural sensibility and awareness. What do you think of that perception?

PAGLEN: This is something that I think about a lot. One thing that interests me about this idea of thinking geologically, or using the geologic as a kind of analytic framework or approach is this: What would happen if you took geographic thinking and instead of putting it on a horizontal axis, you added a vertical axis to it, a temporal axis? You would be thinking not only about unevenness of the surface of the Earth, but also about the multiple ways in which time itself is uneven. If we go back to all the nineteenth century talk of the "annihilation of space and time," we find the beginnings of a world in which humans have reshaped time in the interest of capital and warfare. Mostly, we think about this in terms of speeding up time (increasing capitalist turnover times, labor productivity, financial transactions in the case of capital, and things like GPS targeting and hypersonic cruise missiles in the case of militarism). But in addition to the industrial annihilation of space with time that we see, the 19th century and early 20th century marks the advent of the so-called "Anthropocene Age," a moment in earth's history when humans begin moving more sediment than traditional geomorphic processes (erosion, glaciation, etc.…). In the Anthropocene, things like real-estate markets become geomorphic agents, because fluctuations in housing prices, for example, determine how huge amounts of sediment gets moved across the planet. My point is that human societies are both speeding up and slowing down at the same time. One consequence of these "anthropogeomorphic" processes is that the effects of our activities are played out over longer and longer time periods: one example is climate change: we are setting earth processes in motion that are going to play out over a hundreds, of not thousands of years. Another example is nuclear waste, which intersects with evolutionary and even geologic time. We are making things that exist on geologic time scales. For me, making this geologic turn is a way to try to come to terms with the uneven temporalities of contemporary human existence.

SMUDGE: Much of your work seems to be an attempt to illustrate the fact that "other worlds" coexist alongside, or interwoven within, mainstream daily life. The interweaving of worlds that you photograph reminds us of the latent or invisible forces of the geologic, which are constantly shaping the world we're in, and in ways that are often hidden or invisible. What is your motivation for making invisible worlds and forces visible and sense-able?

PAGLEN: I often think about this notion of geology, or geomorphology, in relation to human institutions. Consider a place like Guantanamo Bay, for example. I would submit that the reason why Guantanamo Bay still is there is because it's there. The chain link fences and the brick and mortar that the buildings are made of actually have a kind of historic agency. They actually want to reproduce themselves. We’re all familiar with the 19th Century idea about the “annihilation of space with time” but the obverse is also true. Space also annihilates time. Whether we’re talking about nuclear waste or Guantanamo Bay, we can see how materialities produce their own futures. This is a way in which materiality and politics intersect. Materiality is not politically neutral, so I think that you can talk about Guantanamo Bay as a political phenomenon. I think that materiality can explain some things.

SMUDGE: One of the realizations we are left with after viewing your space debris project is that space trash will far outlast human existence on the planet. Was such a realization an intentional provocation of that piece?

PAGLEN: Yes, that's an intentional provocation of that piece. And there are some other newer works that are very much about this as well. I also have a piece that came out last year, that's called Time Study, which is a series of photographs of predator drones done as albumin prints. That piece is about trying to think through multiple scales of time itself, and also through the history and the machines that we use to both produce and experience time. And the space debris project is very much about that as well. That project is trying to a create a framework that asks you as a viewer to try look at this world and imagine the time scale and the time frame that you're looking at.

SMUDGE: While doing research for Making the Geologic Now we encountered some people who say that that it's impossible for humans to grasp deep time. But we're starting to sense that's not actually true. We think that aesthetic works might assist humans to begin to cognitively grasp geologic time and geologic forces that shape our daily lives, but that we often can't see or are just outside our frame of reference. If we create artwork to bring focus to this reality, then people can begin to perceive it.

PAGLEN: Absolutely, that's one of the ways that I got interested in this question in the first place. As I was tracking secret satellites, I realized that the majority of spacecraft stay up there long after they’ve powered down and “died.” And so, that got interesting to me. Even some of the earliest spacecraft are still up in orbit. When you start getting into the orbits over a thousand kilometers, decay times go into thousands of years. When you get into geostationary orbits, or high earth orbits, they are effectively infinite. I got really interested in that. In particular, I started to think about spacecraft as artifacts of human culture-really extreme kinds of artifacts of human culture. When it comes to time scales and cultural artifacts, we usually think of things such as pyramids or cave paintings. The time scales associated with cave paintings go back to a few tens of thousands of years or so. Pyramids are between two and three thousand years old. And they are falling apart. When you look at the time scales that satellites exist on, you're talking tens of thousands, hundreds of thousands, millions, billions of years. This is quite dramatic in terms of a human footprint in the cosmos. This is orders of magnitude greater than anything that humans have done before. That's how I got interested in what we might call the human geology of outer space.

SMUDGE: We've been intrigued by your desire to go places yourself and place your body and practice at the edge of these events. Whether it's the "black sites" project that had you taking photos related to secret military bases from distant Nevada mountaintops or from the window of a Las Vegas hotel overlooking the airport, you've been drawn to actually going there and feeling it for yourself. This is an important part of what we are trying to illustrate with the idea of a "geologic turn," this exposure and visceral response to actual event-ness, or to change or forces. Could you tell us about the way you've designed your practice to actually take you into the world, and if part of the work itself is the process of being exposed to its material realities?

PAGLEN: That's a crucial part of what I do. I'm trying to remove as much mediation as I can, and of course, to do that completely is impossible. But if you go to a place, you see all kinds of connections and possibilities and constraints in the materiality of what you are looking at, that you would never be able to see if you didn't go there. This happens over and over again. I think a lot of us have gotten used to getting information or experiencing the world through the information funnels that we have, whether that's reading the news or Twitter feeds. Those very mediated forms close off a lot of things that you would otherwise see if you went to the place where something was happening. For example, I was collaborating with a friend of mine who is journalist. We were looking at different front companies that the CIA had set up to do rendition programs. One of the places we were looking at was a law office in Reno, Nevada. We drove up there and went to the law office, and we realized that there was a former senator who had his west coast office in the same suite as the lesser known law office, which was the home of the front company involved in the rendition program. That was something that you had to be there to realize. You would completely miss that if you just did record searches. Going to the place allows you to make connections that you wouldn't otherwise be able to make. The world is a very complicated place. The more that our understanding of it comes from highly mediated sources, the more complexity gets bracketed out. We don't even realize the extent to which this happens.