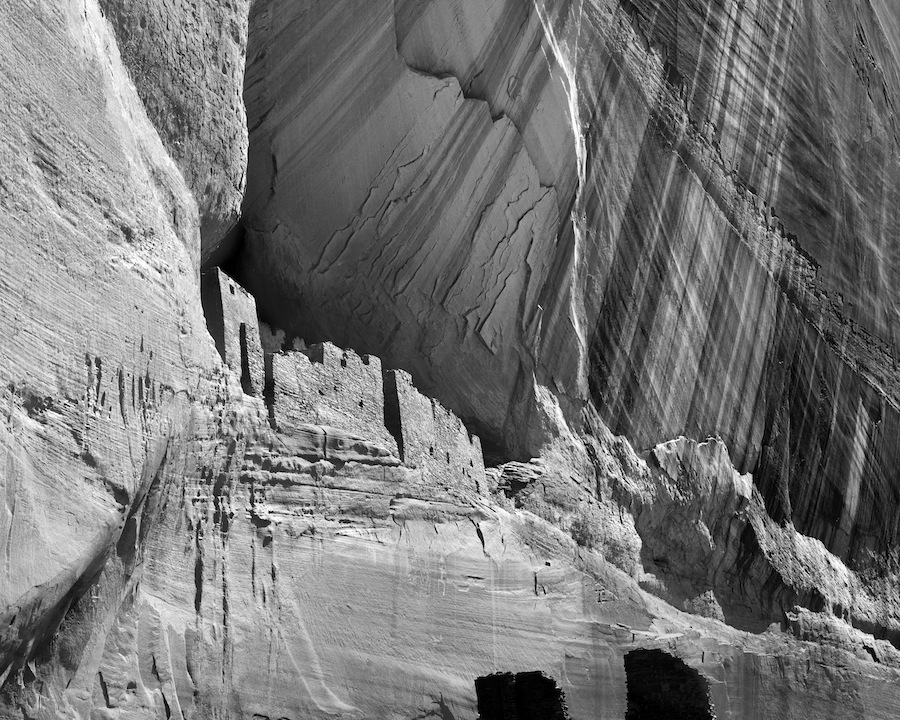 Canyon de Chelly is actually the intersection of several canyons, formed by slow erosion over thirty million years ago. The angled striations seen in the photograph expose even older geological processes, layers of sediment compressing into strata then shifting, rising, and tilting. Between the 1st and 4th century, people now called the Anasazi settled in the canyon. They built the structure in this photograph around the year 1000, and, 300 years later, they had disappeared. Navajo tribes spreading across the Southwest discovered the ruins already 500 years old. In the 18th century, Spanish colonists ventured into the canyon and soon they were converting and killing Navajos who lived there.

United States expeditions arrived in the mid-1800s and fought to claim the Southwest from Arizona's Fort Defiance. In 1864, Kit Carson forced the Navajo of Canyon de Chelly to surrender, and marched them on The Long Walk, almost twenty days from home. In 1868, a treaty established the Navajo Indian Reservation, allowing them to return. Three years later, planning U.S. expansion, the War Department sponsored a Western survey and hired Timothy O'Sullivan. O'Sullivan's 1873 photograph of Canyon de Chelly was intended as information, published in a bureaucratic report filled with measurements and maps. But the grandeur of his image, and survey photographs like it, helped romanticize the Western frontier and fuel American dreams of manifest destiny.

Ansel Adams came to Canyon de Chelly 100 years after the first U.S. expeditions and over 50 years after O'Sullivan. For Adams, the sharp-focused clarity of survey photographs articulated a new frontier for photography. In 1940, he organized a groundbreaking exhibition in San Francisco, presenting survey images as archeological finds that could ground a new origin, history, and aesthetic for photographic art. The same year, the Museum of Modern Art established a Photography Department, headed by Adams' collaborator Beamont Newhall. Newhall institutionalized photography as art, and wrote a book on O'Sullivan. When Adams re-photographed the canyon in 1941, he was articulating layers in the history of photography and in how the West has been seen.

When Adams came to the canyon it was a National Monument and a process of "reorganizing" was returning land to Navajo. Adams was on a commission from the Parks Service that World War II interrupted. War continued to affect the canyon. Weapons were tested in the desert, and in the late 1960s, supersonic aircraft shook cliffs so violently that ruins crumbled. When Paglen took his photograph, in 2010, he considered the history of the canyon and ruins, but also ongoing histories of imperialism and war that the beauty of ancient cliffs and stories of ancient ruins can obscure. His image adds another layer of visibility to a scene already stratified by continual change and rupture.

The second photograph of Paglen's diptych appears beautifully obscure. Against a dark background, faint gray streaks slant down from left to right, punctuated by brighter dots and marks that move against this pattern. The hazy, diagonal lines visually echo the shade, and mirror the direction, of the bands slanting down the cliff from right to left in the canyon photograph. The smaller, brighter marks also resonate with the other photograph, rhyming with the man-made shapes of the ruins' walls and windows, which interrupt the natural geometries of cliff ledge and canyon. The diptych's full title tells us what, exactly, is being juxtaposed: Artifacts (Anasazi Cliff Dwellings, Canyon de Chelly; Spacecraft in Perpetual Geosynchronous Orbit, 35,786 km above Equator). In the second photograph, the streaks are stars, and the bright marks are man-made objects: dead satellites and abandoned shuttle parts. 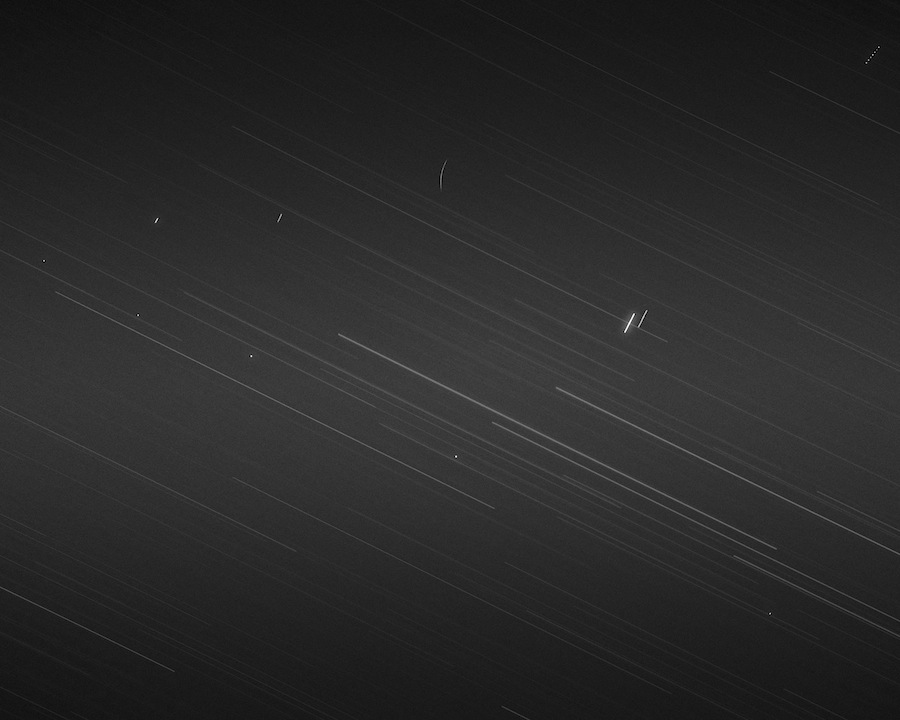 Since the 1960s, hundreds of thousands of things launched into space have stayed there. Today, broken bits of space shuttles, paint chips, defunct satellites, and other fragmentary and abandoned objects orbit our planet as a belt of debris. This band will encircle Earth after humans no longer exist, forming not just a junk pile but a displaced fossil record. Using a digital telescope at an astronomical observatory, Paglen photographs this distant layer of detritus, at the outer edge of not only human space but human history. In order to visualize space debris, Paglen relies on complex algorithms that compile observational data and predict orbital patterns. He uses these algorithms to program the position and movement of a photographing telescope, enabling him to focus on the place an object should be and to track it, slowly rotating to compensate for the Earth's own rotation. The computational and visual technologies Paglen uses to photograph these objects in space are the same technologies that helped put them there. He uses technical capacities developed during the space age, which have reframed the scale of human action and impact, to recalibrate correlated scales of vision, representation, and interpretation.

Juxtaposing geological and astronomical perspectives, Paglen's diptych invokes an earlier moment when these perspectives mutually recalibrated the context of human history and meaning. During the Industrial Revolution, technological changes radically altered frameworks of space and time. Digging mines and canals brought new attention to the ground beneath our feet, and it appeared much older than we thought. In 1785, James Hutton argued the Earth's topology had developed in slow cycles over an immeasurable duration. In 1811, French naturalists demonstrated that patterns of strata could be read as a material timeline. If the depth at which fossils were found told when they were formed, this suggested the age of the Earth might be fathomed from physical evidence, counted off like tree rings. William Smith visualized those rings in a map using different colors to delineate how geological layers were stacked in vertical depth. In 1830, Charles Lyell insisted that the distant past could be read from the Earth's present form, its appearance a material expression of history. These early geologists reimagined the scale and process of history, directly inspiring Darwin, and positing what we now call "deep time."

As geological perspectives were shifting, so were astronomical perspectives. At the turn of the nineteenth century, William Herschel built telescopes that could see further beyond our solar system, and began to imagine the topography of the universe. Herschel suggested that instead of viewing the sky as a dome, the "vault of the heavens," we should regard it as a "naturalist regards a rich extent of ground or chain of mountains, containing strata variously inclined and directed" relative our gaze. Thinking of astronomical space in terms of geological formations suggested how, like strata, levels of astronomical depth express temporal distance. Herschel realized his telescopes not only penetrated further into space but deeper into the past, seeing light that had traveled for millions of years. His ideas initiated the concept of "deep space," provoking an expanded cosmological timeline. Echoing with contemporaneous geological arguments, his view unsettled notions of a fixed and perfect universe, arguing it was unimaginably old and vast, and still changing.

The way we visualize Earth and sky was reorganized with the emergence of photography in the nineteenth century. Flattening whatever it pictured into an image, photography seemed to represent everything visible as within our perceptual grasp--or, at least, gave new shape to that ambition. Geological surveys sent photographers to chart every contour of America's Western frontier. An international body of astronomers undertook a project to photographically map every star. Photography's visual archive promised to collect and juxtapose images of everything to reveal new patterns. As cameras were sent up in hot air balloons, then airplanes, then space shuttles and satellites, the scope of our visual knowledge seemed rescaled. Aerial photography was used by US Geological and Geographical Surveys to topologically map the country, and by astronauts to map the moon. Today, scientists study satellite images that picture the Earth as a globe and space as a set of star coordinates. As geological and astronomical points of view are increasingly displaced beyond human perspective, and aligned with the apparent objectivity of technological imaging, this threatens the imaginative recalibrations new perspectives require. Calibrating the scale at which meaning becomes visible, the range of space and time that seems to manifest itself within our look, always involves visualizing how whatever is seen extends beyond our view, to places and times we can only imagine.

Paglen presents the visual correspondence between the two images of Artifacts as a more profound correspondence of how broken histories, and shifting scales of time and space become visible. The shape of the canyons and the striations of its cliffs contextualize the history of the ruin; the motion of the Earth read off from streaking stars, and the scales of age and distance these faint streaks register, re-contextualize what we have left in space. These lost objects are also ruins, abandoned artifacts embedded in an ancient, astronomical landscape. The image of Canyon de Chelly invokes a history of receding frontiers, the intertwined imaging of art and science, and the repetition of colonial invasion that all find expression in the space race, and are all expressed today as power is exerted through outposts of orbiting satellites. As the abandoned ruin marks the aspirations and outer limits of one civilization after the next, dead spacecraft remind us that another culture, aspiration, and outer limit has always violently appeared, continuing even beyond the planet's own horizon.

Reactivating a mutual calibration of geological and astronomical perspective, Paglen visualizes debris circumscribing our planet as a strata of sediment where our traces collect and will outlast us. This exposes the expanding spatial and temporal removes at which human history takes place and leaves its mark. Paglen's juxtaposition challenges the idea of progress, asking how expanding frontiers might not expand our agency as much as re-contextualize our finitude and expand the gaps of time and space across which meaningful correspondences echo. Set against geological and astronomical scales that far exceed the human, artifacts of two civilizations a thousand years apart compress as traces of the same human history, and suggest the overarching ruin that all of human history must someday be. Challenging us to reframe our perspective within scales that vastly exceed us, his Artifacts diptych asks what traces we would leave.