A basic problem is linked to the very idea of philosophy:
how to get out of the human situation.

I’m interested in the politics of the Triassic period. 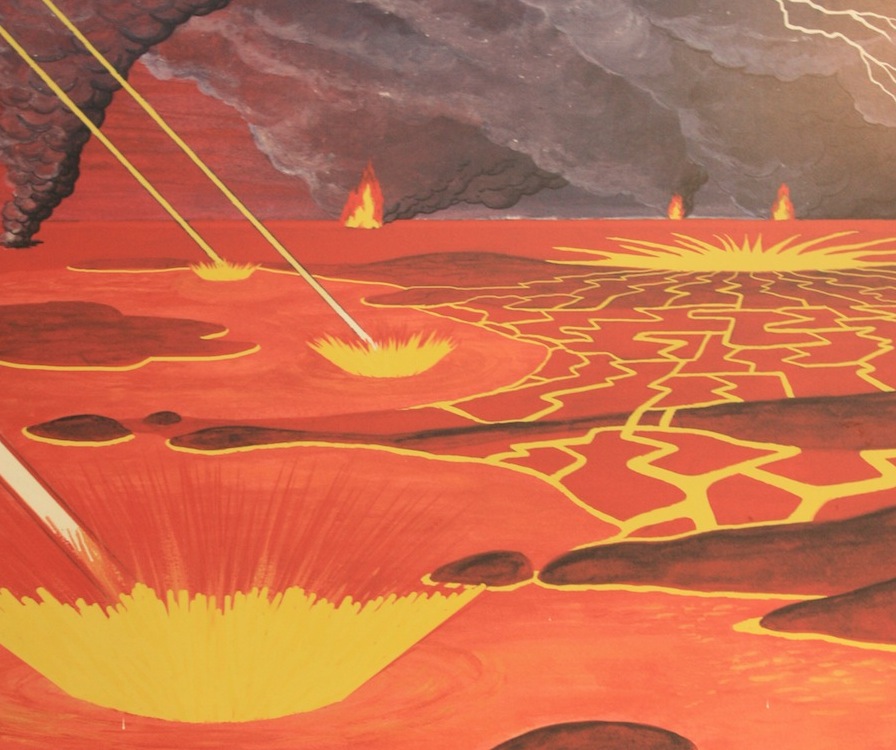 Photograph of “ancestral catastrophe,” courtesy of the author.

Politics, or "A Gnaw That is Ratting"

In response to an artist symposium question regarding the "deepening political crisis in America," Robert Smithson published a piece in Artforum, September 1970, titled "Art and the Political Whirlpool or the Politics of Disgust." In it, he said: "My 'position' is one of sinking into an awareness of global squalor and futility. The rat of politics always gnaws at the cheese of art. The trap is set. If there's an original curse, then politics has something to do with it. Direct political action becomes a matter of trying to pick poison out of boiling stew. The pain of this experience accelerates the need for more and more actions."[1]

Later that same year, when asked about his political stance by Philip Leider, Smithson remarked, "I'm interested in the politics of the Triassic period." In an earlier essay, "The Crystal Land" (1966), Smithson suggested some of the sedimentary compositions at stake in a geo-artistic politics:

The inorganic thrust of Smithson's political refusal is clear. Yet, despite the possible readings of his position as a de-politicized view of sedimentation and history (and, by implication, human agency), Smithson's commitment to the politics of the Triassic period aligns with his broader geo-/cosmo-political project of an "abstract geology." And it allows us to see that project's relevance to the geological turn in cultural awareness and to the era of the Anthropocene. 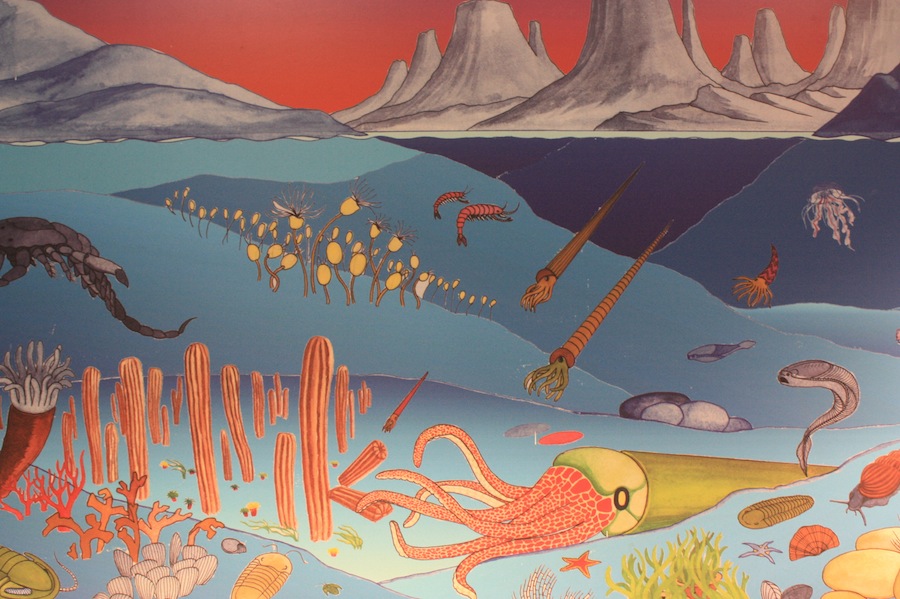 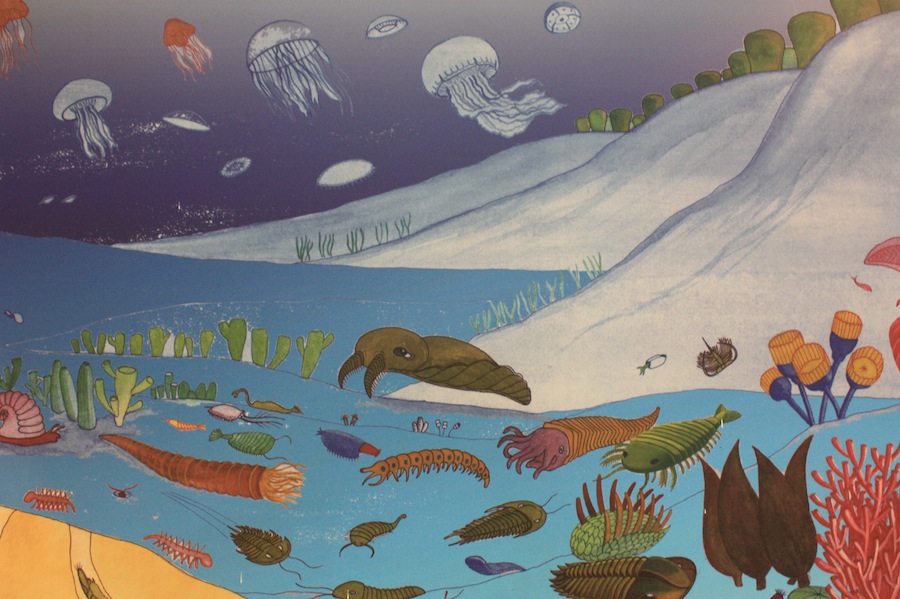 Photograph of “remote times,” courtesy of the author.
back to top ↑

Several works are indispensable for understanding the "abstract geology" that Smithson develops in his "sculpture" and his writing during the late 1960s. In "A Sedimentation of the Mind: Earth Projects" (originally published in Artforum, September 1968), Smithson's contends, "One's mind and the earth are in a constant state of erosion, mental rivers wear away abstract banks, brain waves undermine cliffs of thought, ideas decompose into stones of unknowing, and conceptual crystallizations break apart into deposits of gritty reason. Vast moving faculties occur in this geological miasma, and they move in the most physical way. This movement seems motionless, yet it crushes the landscape of logic under glacial reveries." (RSCW 100)

The cognitive processes are not, in this description, merely metaphorically connected to the material geological tendencies. Smithson's emphasis suggests that there is a contiguous, rather than comparative, relation between mind and matter. After discussing his affections for construction equipment, Smithson goes on to suggest, "With such equipment construction takes on the look of destruction; perhaps that's why certain architects hate bulldozers and steam shovels. They seem to turn the terrain into unfinished cities of organized wreckage" (RSCW 101). For Smithson, "The actual disruption of the earth's crust is at times very compelling, and seems to confirm Heraclitus's Fragment 124, 'The most beautiful world is like a heap of rubble tossed down in confusion'" (RSCW 102). 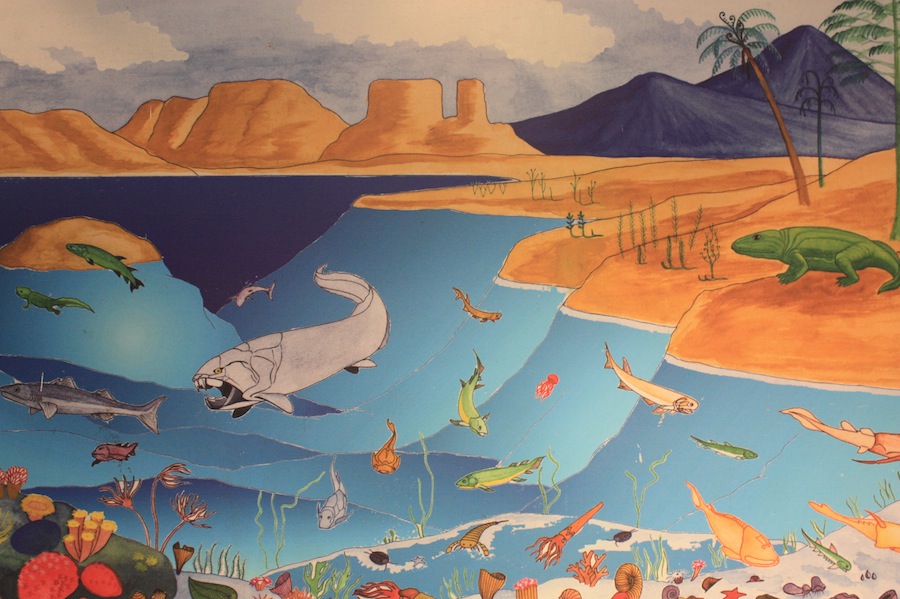 Later in the same essay Smithson again refuses metaphor and states, "The strata of the Earth is a jumbled museum. Embedded in the sediment is a text that contains limits and boundaries which evade the rational order, and social structures which confine art. In order to read the rocks we must become conscious of geologic time, and of the layers of prehistoric material that is entombed in the Earth's crust. When one scans the ruined sites of pre-history one sees a heap of wrecked maps that upsets our present art historical limits" (RSCW 110). In order to escape the confines of the restricted economy of art history, Smithson thus suggests reading another form of text, that of the geological sedimentation that is culture. As Georges Bataille warns, "Sentences will be confined to museums if the emptiness in writing persists." [2]

If the museum is the space where the iconic shapes and images of culture are confined to a particular, historical, and socially-conservative articulation, Smithson's practice attempts to break this space open and bend the discourse of art into strange contours befitting the improbable circumstance we call existence. Smithson confronts attempts to contain art work within the boundaries of criticism. Writing with particular force against the critic Michael Fried, Smithson asserts: "Most critics cannot endure the suspension of boundaries between what Ehrenzweig calls the 'self and the non-self.' [...] The bins or containers of my Non-Sites gather in the fragments that are experienced in the physical abyss of raw matter. The tools of technology become a part of the Earth's geology as they sink back into their original state. Machines like dinosaurs must return to dust or rust. One might say a 'de-architecturing' takes place before the artist sets his limits outside the studio or the room" (RSCW 103).

"De-architecturing" does not merely reiterate artistic freedom against the imagined confines of the museum. Instead, it is a confrontation with the artists' own presumptions about making and the space of production. It is also an abstract geologic practice, which examines and selects the foundational elements upon which these architectures of confinement, both in terms of actual space and potential capacity, rest. 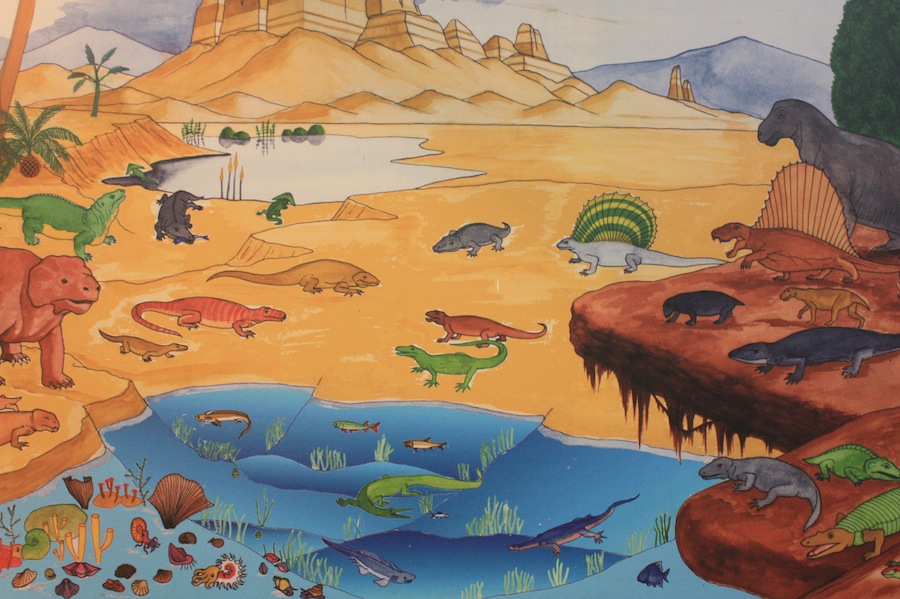 Photograph of “remote times,” courtesy of the author.
back to top ↑

Smithson is committed to annihilating any simple historical narrative that would allow the values and morality of Man to infect analysis or practice. Smithson's politics of disgust is entirely related to the problems of history and progress, whether articulated in terms of social and political life, aesthetic refinement, or philosophical inquiry. Perhaps the most striking statement on these points is to be found in Smithson's "travelogue" essay "The Domain of the Great Bear." In it, he recounts his visit to the Hayden Planetarium (originally published in Art Voices, Fall, 1966). In the final section, "Illustrations of Catastrophe and Remote Times," Smithson describes an especially convincing mise-en-abyme:

The problem of the "human figure" vanishes from these illustrated infinities and prehistoric cataclysms. Time is deranged. Oceans become puddles, monumental pillars of magma rise from the dark depths of a cracking world. Disasters of all kinds flood the mind at the speed of light. Anthropomorphic concerns are extinct in this vortex of disposable universes. A bewildered "dinosaur" and displaced "bears" are trapped in amazing time dislocations. "Nature" is simulated and turned into "hand-painted" photographs of the extreme past or future. Vast monuments of total annihilation are pictured over boundless abysses or seen from dizzying heights. This is a bad-boy's dream of obliteration, where galaxies are smashed like toys. Globes of "anti-matter" collide with "proto-matter," billions and billions of fragments speed into the deadly chasms of space. Destruction builds on destruction; forming sheets of burning ice, violet and green, it all falls off into infinite pools of dust. A landslide of diamonds plunges into a polar crevasse of boundless dimension. History no longer exists (RSCW 33).

The themes in this passage hang from the myth of human progress like corpses from an open wagon, clumsily winding its way to an open grave: cataclysm, derangement, monumentality, disposability, dislocation, bewilderment, obliteration, destruction. They refuse to perpetuate the interminable denial of the ambiguity and absurdity of human existence within the geological and cosmological continua. Here we see Smithson anticipating the Anthropocene most clearly: to think the human divorced from assumptions of purpose. 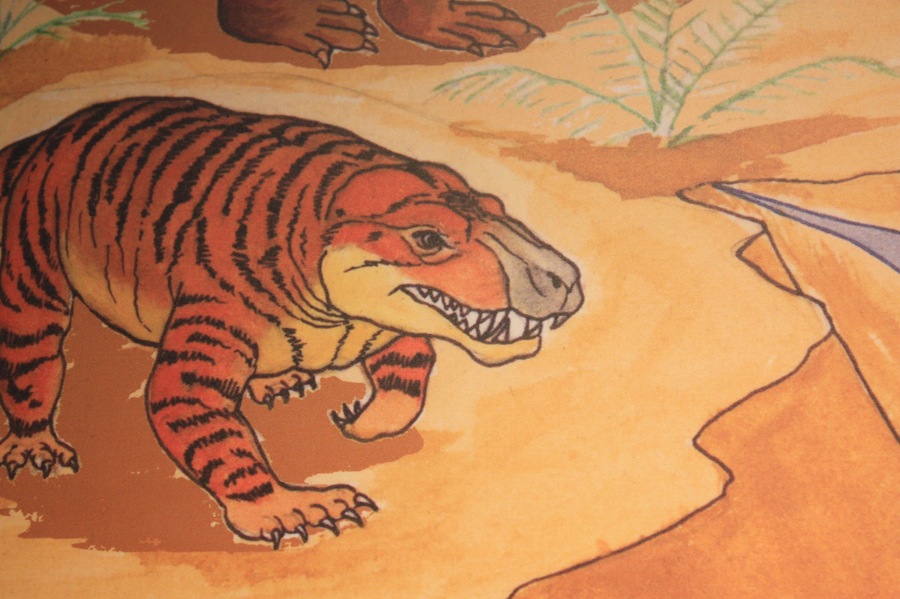 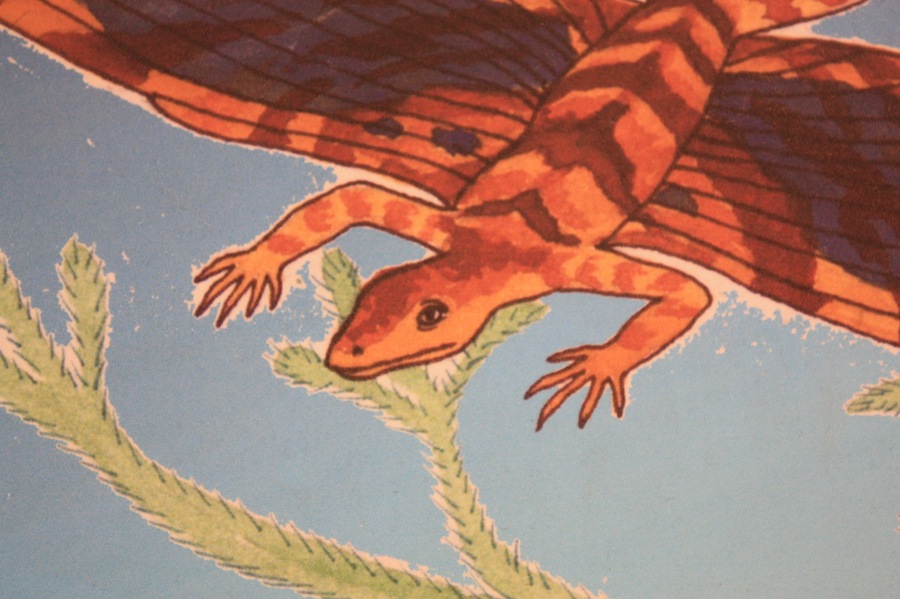 Smithson's concern with the entropic decline witnessed by geological time can be clearly read through many works from the 1960s, including his early collage Untitled (Venus with Reptiles), 1963. The Venus collage includes fourteen separate rough cut outs of images of reptiles oriented with more or less interest around a centerfold nude figure, reminiscent of a 1960s Playboy model, whose calm yet depthless repose and accentuated breasts suggest a contemporary Venus under the gaze of the agents of geological time as opposed to her usual cherubs, or, perhaps, a contemporary Olympia, now herself enslaved by the reptilian messengers of deep time. Her sanctity, whether as aesthetic figure or popular model, is threatened by a time scale that far exceeds the human. If we accept the geological referent suggested by the reptilian frame, it is clear that Smithson's preference for Triassic politics is an attempt to break with the limited horizon of European aesthetics and its concrescence in the form of Modernism criticism (i.e. Clement Greenberg and Michael Fried), and the separation of art and criticism implied by this tradition. 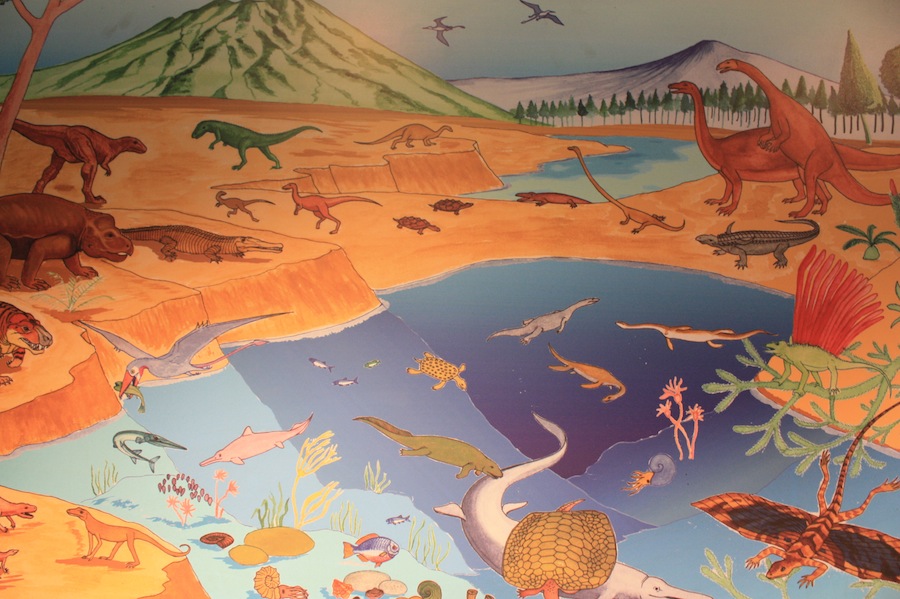 But, these reptilian figures, while popularly associated with the legacy of the Jurassic period, also witnessed events corresponding to the politics of the earlier Triassic age (250-210 million years ago). They saw the slow but decisive break-up of Pangaea into the two supercontinents, Laurasia and Gondwana, evidence that any form of stable unity is a fiction undone by the viscous earth. And they observed the morphological emergence of ceratitida, the order of nearly all ammonoid cephalopod genera, whose planispiral shells suggest a coiling figuration that would later be rescaled in Smithson's most well-known earthwork.

Politics can be understood as a confrontation among forces that permit, through various means, the negotiated expression of form. Within that understanding, the testimony of the Triassic in the sedimentary record is a reptilian refusal of the Modernist narrative of artistic medium-specific progress. It is also a demand for artists and thinkers today to confront, through inhabitation and apprenticeship, the disorienting material spiral of mineralization that confronts the myth of human progress in Anthropocene.