5: Modeling Collaborative Practices in the Anthropocene 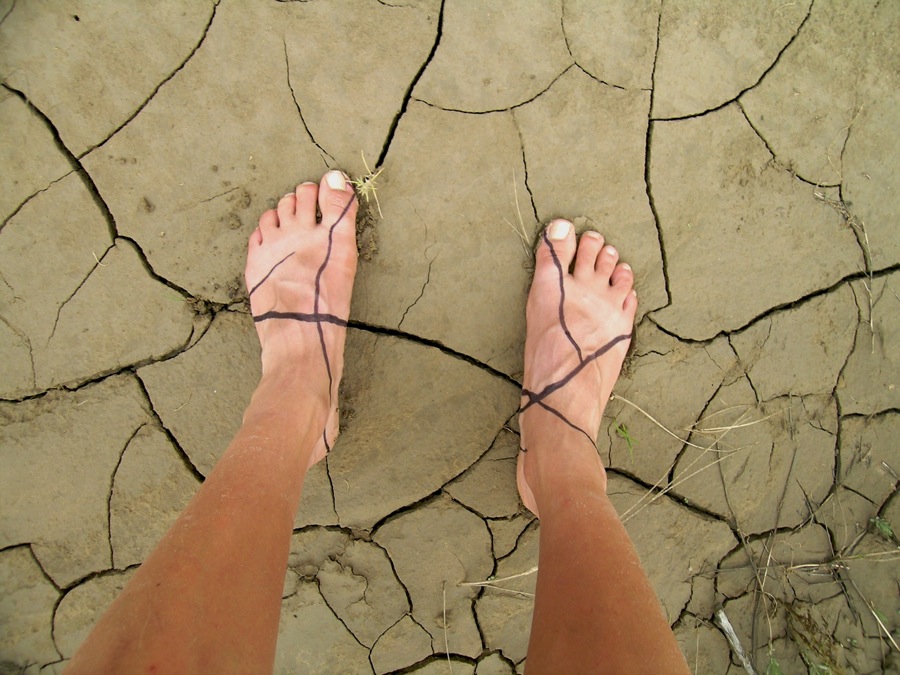 In 1999, the University of New Mexico embarked on an extended experiment in art practice. Over the ensuing twelve years we have developed the Land Arts of the American West program as a model for a place-based education in the arts to prepare our students for the rapidly changing environmental and social context they will enter upon graduation.

Our program has developed in a period marked by a dawning awareness that the collective activities of our species have impacted the planet over a sufficient time period to qualify as a geologic epoch, the Anthropocene. With this realization comes a daunting responsibility. The arts must now participate in our collective response and contribute to a change in our narrative as a nation and species if the Anthropocene is to extend for thousands of years into the future.

To be successful we are going to need a perspective that encompasses the expanse of planetary time, not the fleeting moments of pop culture. In our effort to confront the problems we face, the arts can model a new cooperative/collaborative approach that will supplant the current individualistic paradigm. Our attempts to address the implications of an Anthropocene Epoch will require a shared multicultural and interdisciplinary perspective that is based in direct engagement with the physical planet.

Land Arts of the American West, in its current role as the field program in our Art and Ecology curriculum, is designed to provide students with an experience based in direct contact with the environmental and cultural aspects of our region and a collaborative response to existing conditions/problems.

UNM is situated in the social context of the city of Albuquerque and the environmental context of the high deserts of the American west. As such, we are located at the cultural nexus of the major migrations of human populations that have driven habitation on this continent: the north-south migrations of first Native and then Hispanic cultures and the east-west migrations of northern European cultures. In ecological terms, we are placed in the exposed topography of the deserts of the Americas where the axis of the geologic and the geographic meet. The horizontal axis of geography, the surface of the planet, intersects the vertical axis of the geologic, strata upon strata of mantle surrounding a magma core. This intersection is eminently visible in natural events throughout the west including riverbanks, landslides, and escarpments and also in the layers revealed by man’s activities in constructing rail lines, highways, and mines.

Each fall Land Arts at UNM sets off from our home base in Albuquerque to navigate the geography of the west. Skimming across the surface of the planet, moving freely through space as a nomadic band of art hunters and gatherers. We cover vast swatches of the desert landscape. Students experience first hand the range of interventions in the planet’s surface made by Native American and Hispanic cultures, contemporary Land Artists, and the military industrial complex developing a sense of how humans have altered the environment across a 6,000-8,000 year period. 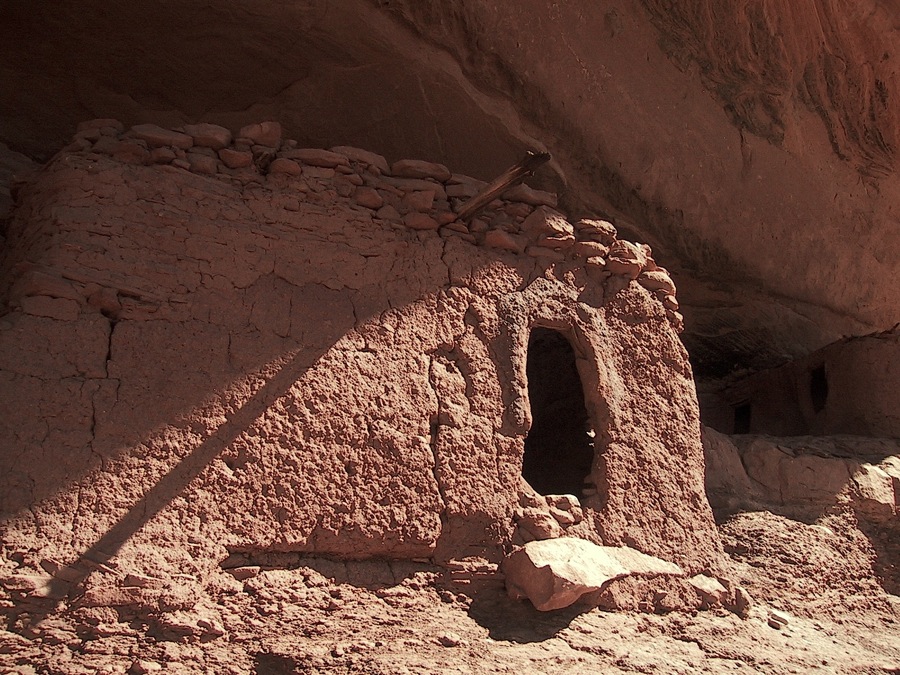 As the successive years of the program have been laid down one on top of the next, we have become aware of a slow accretion of experience. We have now been to Spiral Jetty eight times in an annual visitation each fall. At our first encounter, the Jetty was almost entirely submerged with just a few rocks poking through the surface of the lake providing a faint outline of the spiral. We have seen it slowly emerge covered in a bright white salt crust, turn dingy grey and land-locked only to subside once again as the waters of Salt Lake have continued their cycle of rise and fall. Our years of contact becomes a lens through which to grasp the Jetty’s forty-year cycle of creation, submersion, and emergence that, in turn, points us towards the deep geologic time of ancient Lake Bonneville slowly receding to leave the current Salt Lake, undoubtedly destined to rise once again in a distant future.

Our focus has now changed in response to these investigations in place. We have moved from the grand survey, an art tourism approach, to one of engagement and commitment, building relationships with a limited number of sites and communities. No longer skimming the surface of the west, we have accepted the implications of the Anthropocene and have begun to build sustainable roots by drilling down into specific environmental and social places.

Our sense of what our work is and how it operates in the world has changed, as well. Originally, the focus was on the aesthetics of marks left on the surface of the planet by Native, Hispanic, and Anglo cultures; pictographs, petroglyphs, earthworks, dams, mines, etc. Faced with the environmental and social upheavals brought on by global warming we are now investigating a different focus for art practice; one based in a collaborative dialogue with place and community.

In some cases this means using our skills as artists to change the narrative around existing cultural interventions. In 2009, the Land Arts program worked at the Center for Land Use Interpretation’s base in Wendover, Utah to create a work entitled A Hole To China based on Lucy Raven’s film animation entitled “Chinatown.” After a group trek with CLUI director Matt Coolidge and guest artist Lucy Raven to the Bingham Copper Mine outside Salt Lake to see one of the largest man made holes on the planet, 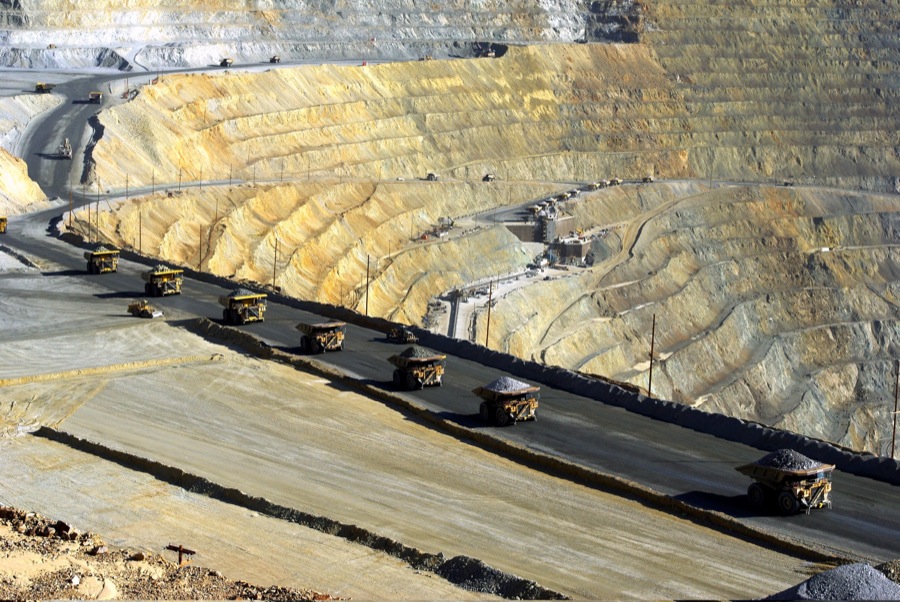 we decided on a project that would articulate the particularities of the connection forged by copper mining/smelting between Ruth, Nevada and Tongling, China. Our intervention, installed by the students, consisted of interpretive signs and pamphlets. 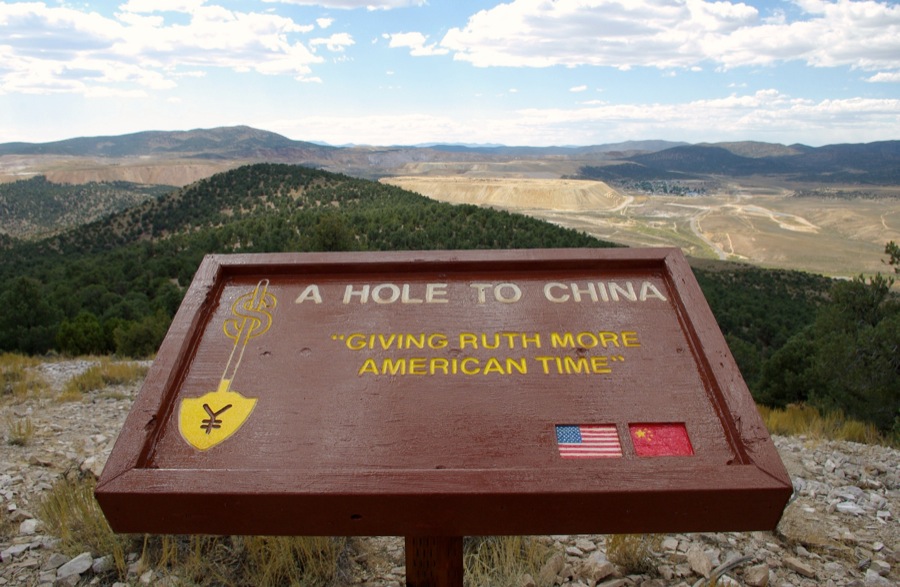 Adapting the aesthetics and forms of US Government signage, we offered an alternative interpretation of the mining activities based in the saying from childhood that we are “digging a hole to China.”

In other contexts this has meant working with community members in projects to build environmental and social sustainability. In recent years, Land Arts has returned to CLUI’s South Base station to collaborate with Matt Lynch and Steve Badgett of Simparch at clean livin,’ 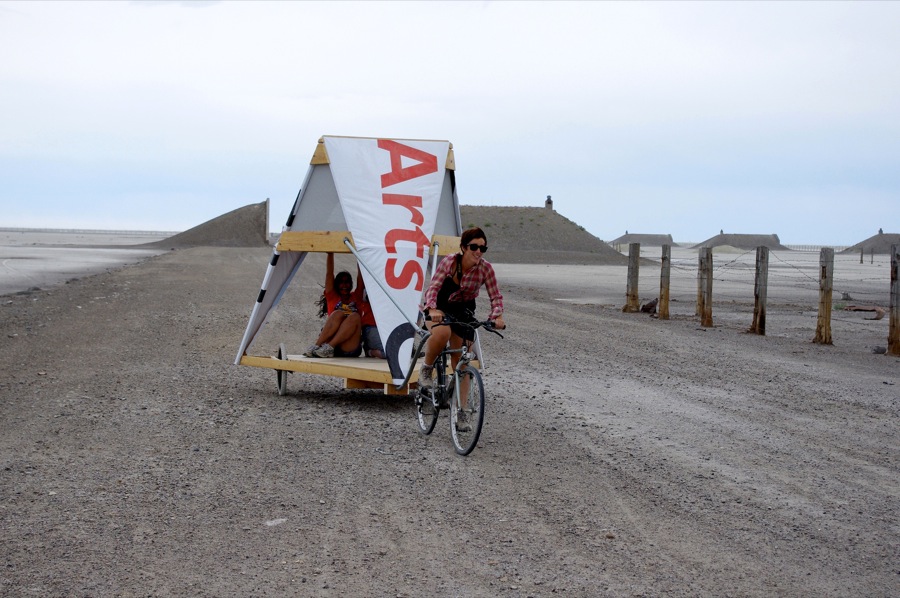 In the Buena Vista Neighborhood of El Paso, TX we have established a partnership with El Centro Artistico y Cultural (CAYC) through its director Roberto Salas. Land Arts is involved in a long-term commitment to assist the neighborhood efforts to improve the quality of life for its residents. In collaboration with the CAYC and the Buena Vista Neighborhood Association (BVNA), Land Arts first created a 200’ by 6’ mural in 2009 out of recycled marble counter tops to enhance the entrance to the barrio. In 2010, we helped community members develop a master plan for Buena Vista that included an initiative to protect the neighborhood from Department of Transportation efforts to annex neighborhood land to expand I-10, and a proposal to add wetlands currently belonging to Cemex Corporation to the community park. 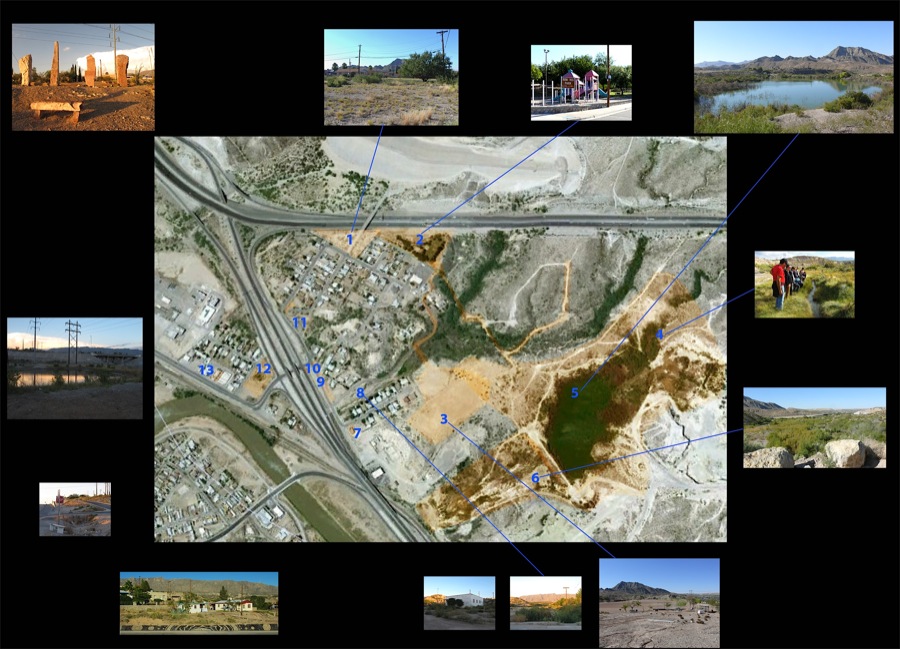 This year we responded to a long neglected community request by designing and constructing a bus stop for the neighborhood. Older community members now have a shaded place to sit as they wait for the bus in the 100-degree plus heat of El Paso summers. 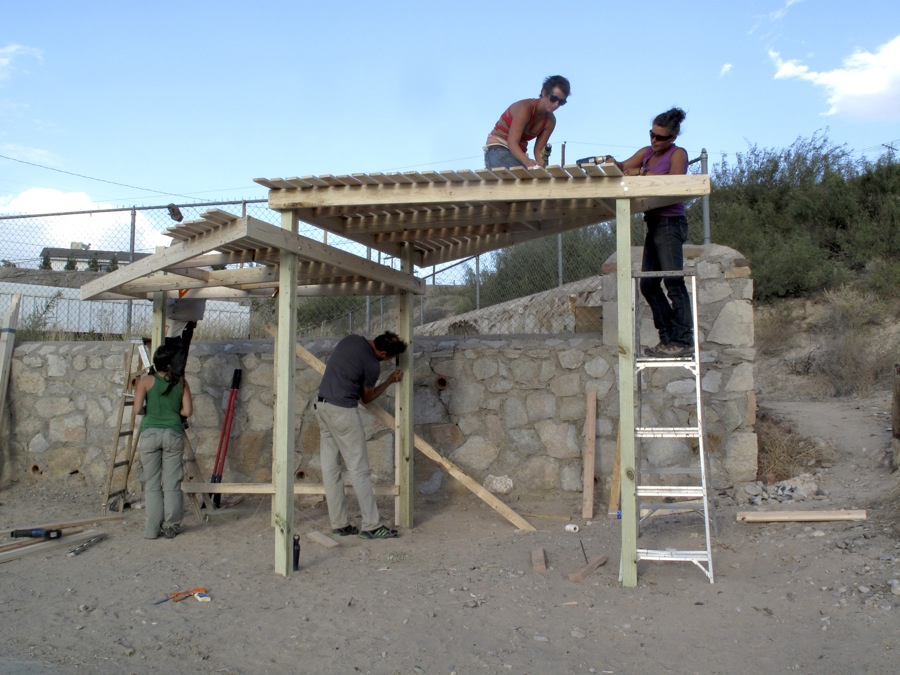 We are currently working with CAYC, BVNA, the City of El Paso, and UNM biologists on a grant to the EPA that would provide funds to restore the adjacent wetlands and train community members to monitor environmental conditions in the neighborhood.

Each of these projects by themselves will do little to alter the course of the environmental and social change. They do, however, model a fundamental shift in how art as a practice is defined at the University of New Mexico and how Art and Ecology students are being prepared to engage with our culture as we strive to establish a sustainable society and extend the run of the Anthropocene Epoch.