3: From Rock Art to Land Art/Pleistocene to Anthropocene 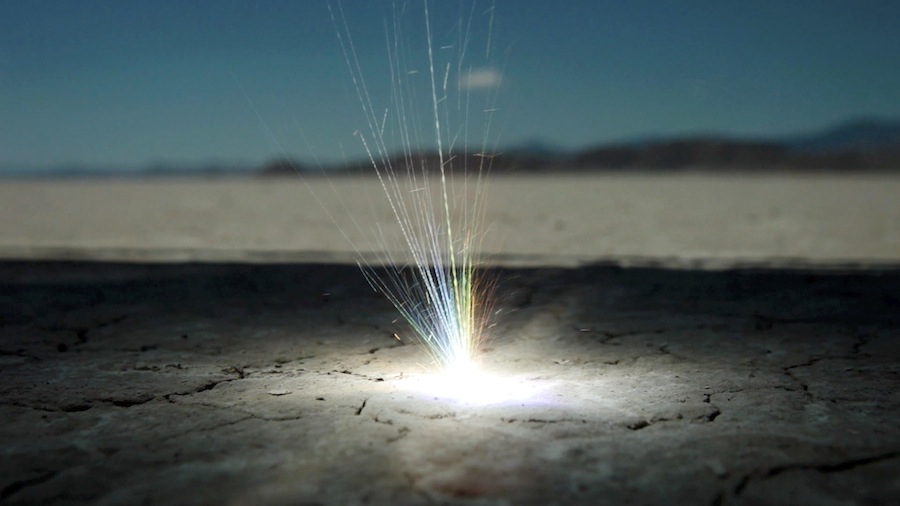 Our species of primate, Homo Sapiens, has been around for perhaps 200,000 years, and since then humans have witnessed two geologic turns. The Pleistocene Epoch lasted from approximately 2,588,000 years to 12,000 years before the present (BP), a period of repeated glaciation during which ice at maximal times covered as much as 30% of the Earth’s landmasses. The Pleistocene turned into the Holocene as the seemingly perpetual El Niño conditions switched off and the ice retreated. The “Recent Time” of this next epoch saw the spread of humanity into virtually every corner of every continent, save the Antarctic. The second turn we’ve seen is from the Holocene into the Anthropocene, which Nobel Laureate Paul Crutzen proposes began with the late 18th-century rise of industrialism. This “Human Time” is marked by a global layer of carbon laid down by the burning of fossil fuels, the emergence of a global stratigraphic event being a commonly accepted marker of a change in epochs.

When Paul Crutzen announced in 2000 that we were no longer living in the Holocene, but in a new geologic epoch, he reformulated not only the equation of anthropic effect on landscape, but the timeline of art as we understand it. Now the Holocene was not simply the epoch of human endeavor and image making, but a bridge from the hominids who scratched marks on rock surfaces to those who now leave larger marks inscribed on the land. Both can be construed as attempts to map environments, be they at the small scale of a valley or the large scale of a cosmos, committed with intent to last for millennia or to wash away in the first rain.

Australia is the oldest continent, some of its rocks dating back to 3.5 billion years, and the date of its occupation by humans is steadily pushed back by anthropologists almost every other year. Human arrival on the continent was estimated at 40,000 years BP during the 1990s, but some scientists are now proposing a date closer to 60,000 years BP. Some of the rock art of Australia pictures animals extinct as long ago as 40,000 years BP (for comparison, the earliest animals painted in the Chauvet cave of Southern France, which are the oldest known cave paintings, may date back to between 30,000 and 32,000 years BP). The Dampier Archipelago of Western Australia is the location of the one of oldest and perhaps the largest rock art sites in the world with as many as a million petroglyphs densely inscribed on its islands and the Burrup Peninsula. At the foot of the peninsula is a fenced enclosure behind which rest several hundred red rocks bearing petroglyphs, placed there in the early 1980s in an attempt to preserve the rock art from the development of an immense liquid natural gas processing facility. The 1800 or so boulders are mostly upside down to preserve the images from corrosive gases and natural weathering.

It’s shocking to see Pleistocene art that’s been torn from its site -- thus its cosmological significance to Aboriginal people -- then turned away from the sky and imprisoned behind a chainlink fence. But the human activity that creates the Anthropocene, in particular resource extraction, has a way of doing that, of turning things upside down. The Anthropocene is defined as an epoch during which humans literally brought forward out of time energy locked up in old rocks in order to expend it here and now. The most recent geologic turn is marked literally with turning things upside down and inside out.

The most renowned and cited geoscientist of the 19th century was Alexander von Humboldt, whose 5-year excursion to South America with the artist-botanist Aimé Bonpland midwifed the birth of Earth systems science and ecology (and an early proposal for continental drift). But his magnificently illustrated accounts of the journey, published in thirty volumes with the help of fifty some illustrators, engravers and calligraphers, also inspired several generations of artists to paint landscapes that were not only brilliant depictions of geological wonders, but encyclopedic depictions of eco-regions. Frederick Church’s canvases of the Andes and Thomas Moran’s of Yellowstone and the Grand Canyon are notable examples. Von Humboldt’s scientific project, which encompassed or outright invented entire fields from physical geography to meteorology, were anchored upon his training as a mining engineer, which is to say geology. 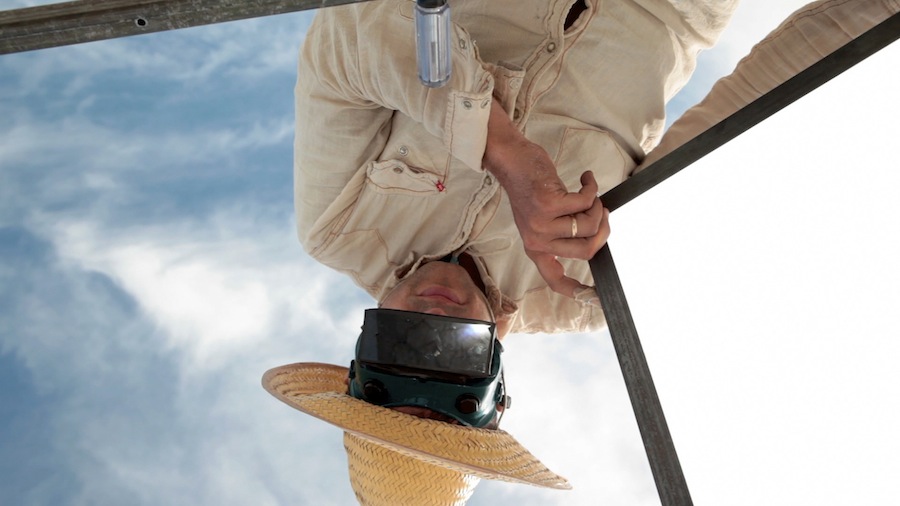 As anthropic effects upon landscape became more noticeable through the artifacts of the Industrial Age being strewn about the landscape, documentary artists took note. Increasingly those artists were photographers, from Timothy O’Sullivan to the New Topographics artists of the 1960s, such as Robert Adams and Hilla and Berndt Becher. Now the typologies being established were of built structures, such as tract housing and blast furnaces, highway overpasses and retaining walls. What von Humboldt and his colleagues had established in the 19th century was the overarching idea that to picture the world was to necessarily image a system of life intricately and inescapably linked to the geologic. The idea of geographical determinism -- that who you are and what you build are profoundly influenced by where you live -- is extended in contemporary terms by scientists as notable as E.O. Wilson and geographer Jared Diamond. And that was as true of the rock art makers of the Burrup Peninsula as it would be for the artists of Earthworks in the 1970s.

While Ansel Adams was carefully manipulating his photographs at mid-century to excise evidence of human habitation in the landscape, and the New Topographers were making views of suburban sprawl, another shift was occurring among artists reacting to the Anthropocene, and that was to use land itself as a medium. Earthworks artists such as Michael Heizer and Robert Smithson were aware of both geology and the changes being wrought upon it by humans. Smithson’s romanticism of geology was constant, leading him to define the context for his most famous work, Spiral Jetty, as “fluvial entropy,” an acknowledgement that the geomorphology of the Earth was constantly in change. Pushing his curved line of boulders, an obvious appropriation of a rock art symbol, out from the shore next to an abandoned oil drilling site was more than just an ironic gesture: it was an acknowledgment of how geological epochs were linked.

Heizer’s father, the renowned archeologist Robert F. Heizer, was an expert on everything from the stone structures of the Olmec people in southern Mexico to the rock art of the Great Basin, and the sculptor’s family included mining engineers, as well. The human history of moving large stones is exactly why Heizer's newest work at the Los Angeles County Museum of Art involves shifting the most massive geological object ever moved by humans, a 350-ton, 21’ 6”-tall granite boulder transported on a truck with 200 wheels from a Riverside quarry to Wilshire Boulevard where it will become Levitated / Slot Mass. It’s another example of an artist of the Anthropocene unearthing and reorienting a piece of geology. People will walk under the 680,000-pound boulder through a trench 456 feet long and fifteen feet deep, putting themselves under geology, Heizer using sheer size to recalibrate their sense of scale in the world.

Heizer’s largest project, City, in Nevada’s south-central Garden Valley, is more than a mile long and consists of a wide trench 20 feet deep. Your isolation from the landscape, even as you are immersed in it, is enhanced by berms 20 feet high, the trench and its walls enclosing concrete forms of both Mesoamerican and European origin in a stringent dialogue between the New and Old Worlds. But to climb up the face of one of the huge concrete-shot stelae forms from the bottom of the sculpture to its top is to rise straight out of the valley sediments of the Pleistocene into the fumes of the Anthropocene. Michael Heizer’s body of work, which includes numerous sculptural enlargements of tools from the late Pleistocene excavated by his father, is a complete bridge across the Holocene, but it’s not the only example. 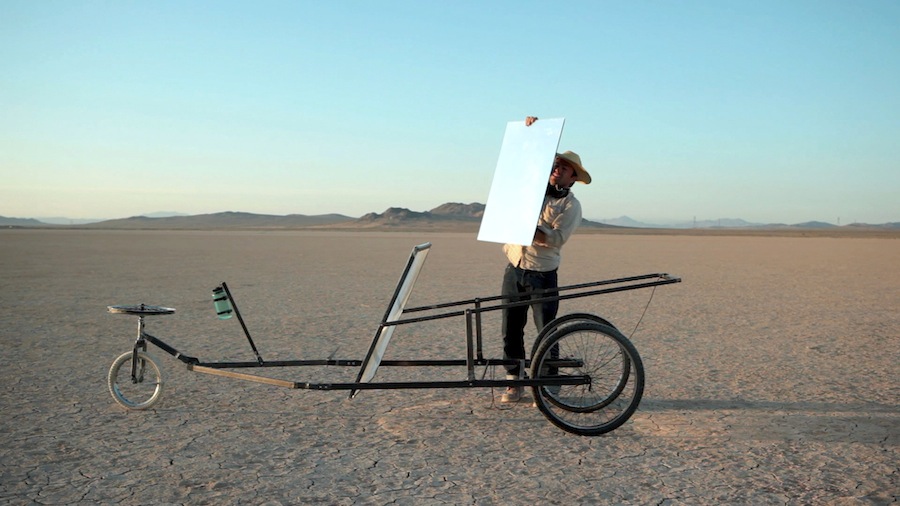 Land Arts has evolved away from large static projects, such as those by Heizer and Smithson. A number of them, for example, have been participatory projects based on dynamic celestial interactions, including Nancy Holt’s Sun Tunnels, James Turrel’s Roden Crater, and Lita Albuquerque’s Stellar Axis in the Antarctic. These, too, have roots in the rock art of the Pleistocene, many of them, including spiral petroglyphs in the American Southwest, being the target for shadows cast on equinoxes and solstices by carefully placed stone uprights and natural features.

A recent project that fuses the Pleistocene to the Anthropocene is William Lamson’s A Line Describing the Sun. Using a large Fresnel lens mounted on a wheeled conveyance, Lamson pushed his instrument across the Harper Lake playa in the Mojave Desert and melted a line across the polygon-patterned ground with a 1600ºF ray of light. Lamson used real-time sunlight, versus that stored in fossil fuel, to burn a thin black arc 366 feet long into the Late Pleistocene sediments. The daylong performance, captured and condensed into a 13:35 minute video, has another layer of meaning in that it was conducted on the same dry lakebed that houses part of the world’s largest solar energy plant. NextEra Energy Resources array of 900,000 mirrors spread out over 1500 acres was built specifically in response to market conditions dictated by the rising energy costs and pollution of the Anthropocene. Lamson, instead of using sunlight to picture the world in a photograph, puts the energy to work directly on the land-as-medium.

The art of the Anthropocene can be seen as a reaction executed by humans to how we perturb earth systems at the geological level. It’s not that Heizer, by re-situating a 340-ton boulder over our heads, is deliberately pointing that out in his work, but it has that effect. It allows us to conjure up the connections from one artistic epoch to another. Von Humboldt, who studied ancient ethnographic arts as well as discussed modern color theory with Goethe, would have had no trouble understanding how humans use geology -- from boulders as a canvas to a photograph of boulders to a boulder levitated into the heavens -- to constantly renew our picture of the world. 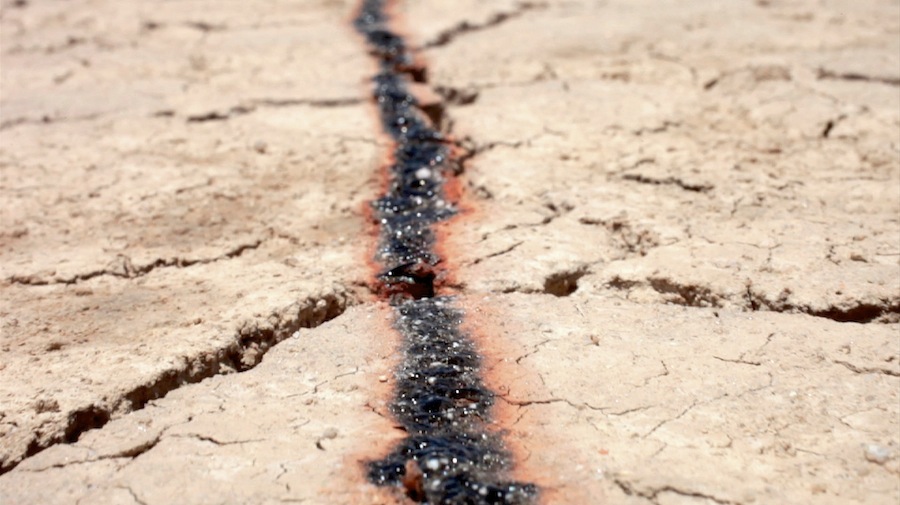 Image courtesy of William Lamson, A Line Describing the Sun, 2010
back to top ↑