Center for Land Use Interpretation 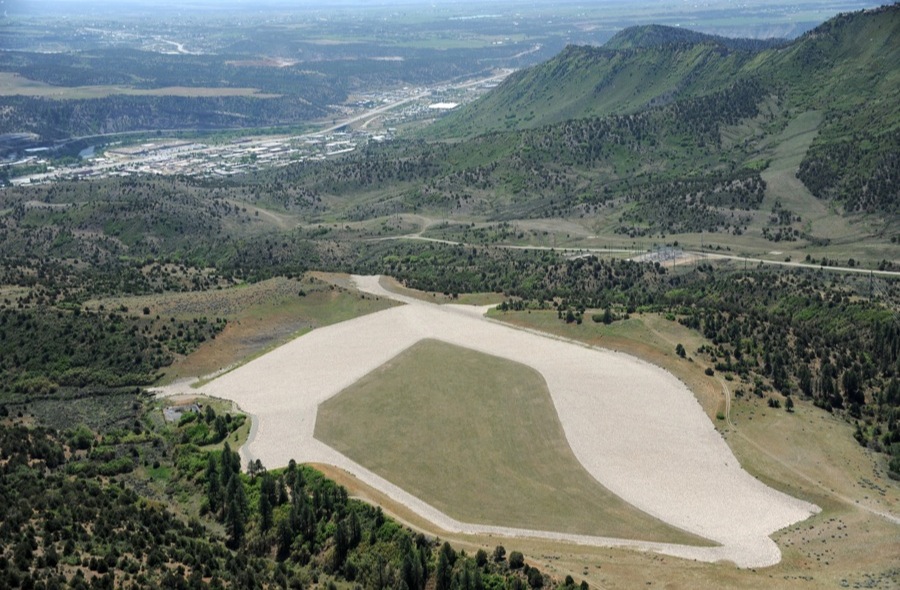 Though the underground nuclear catacombs for America's spent nuclear fuel are yet to be created, radioactive tombs of America's various nuclear programs already exist today, with more to come. Most are repositories for the remains of uranium mills, processing facilities, weapons plants, and contaminated tailings, bulldozed into engineered isolation mounds designed to limit contact with their surroundings for hundreds of years. There are dozens of these mounds, across the country from Pennsylvania to Arizona, built mostly by the Department of Energy, and maintained by their Legacy Management office.

These disposal mounds are generally low, rectilinear piles with flat, sloping tops - terrestrial umbrellas, keeping moisture out of the pile as much as possible. In arid environments, the outer layer is a coating of coarse riprap rock, a dead space where nothing grows, where no soil forms, and no roots take hold that could pierce the radioactive core. This tough skin allows occasional rains to pass through it to the next layer, a low-permeability clayey mixture a few feet thick. Water drains off to the side of the pile through channels at the base held in place with more layers of crushed stone.

These disposal cells are located primarily in the Southwest, where natural uranium deposits were found and exploited. Some of these former uranium mills were set up secretly for the Manhattan Project. Most started in the 1950s, and many operated until the 1990s. Presently, only one conventional uranium mill is operating in the USA, the White Mesa Mill in Blanding, Utah, in the heart of the uranium district and Indian country. However, that may change as the nation shifts towards more self-reliant energy sources.

Each disposal cell covers many acres and as much as half a square mile. They resemble ancient pyramids or relics from a geometrical mound-building culture, like archeological forms made for the future. They represent the legacy of the most advanced technology of a global culture: the creation of the atomic bomb, the ability to destroy the world at the push of a button. They are part of the nationwide network of industrial sites created to extract, process, manufacture, and engineer nuclear fuel for reactors and weapons--a continent-wide landscape machine to concentrate a naturally occurring trace material into such compressed atomic density that it explodes with galactic energy.

These mound sites, byproducts of this effort, are the end of the line, meant to be unconnected to the rest of the world, like deadly anachronistic time capsules. These are the most negative of spaces, nonplaces, meant to stay inert and isolated for as much of forever as possible, kept from the present, but destined for the future.