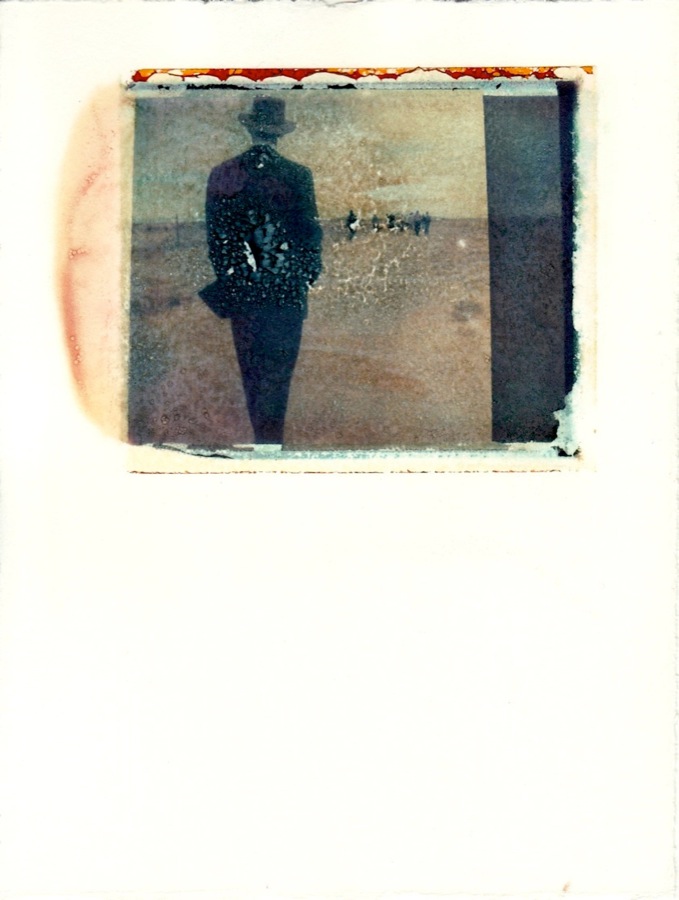 On September 29th, 2009, I was about to begin a pilgrimage to a remote location in the Southwestern desert. With my mother as navigator, my plan was to drive from my home state of Montana to the Trinity Nuclear Test Site, located within the White Sands Missile Range between Alamogordo and Soccorro, New Mexico. The United States military opens the Trinity Test Site to the general public two times a year, in the beginning of October and April. On July 16, 1945, the first plutonium-based atomic weapon was detonated on a remote location in the New Mexican desert. The subsequent explosion of "The Gadget" was described as a blinding light of golden, purple, violet, gray, and blue, lighting up the early desert morning as if it were high noon. At ten miles away, spectators required dark sunglasses to look upon the explosion without damage to their eyes.

The Trinity explosion did not produce a crater at ground zero, but left behind a small lake of greenish glass, dubbed "trinitite." It is theorized that the intense heat generated by the nuclear fireball (in excess of 14,000 degrees Fahrenheit) liquefied the desert sand floor into glass and sucked the material into the emergent mushroom cloud. At such high force and temperature, the vaporized glass behaves like water in a typical cloud: it collects in the mushroom cloud, aggregates and falls back to the earth as a shower of molten glass. The extant body of glass, trinitite, was the only material that remained at ground zero - The Gadget and the metal scaffolding holding the device were obliterated. 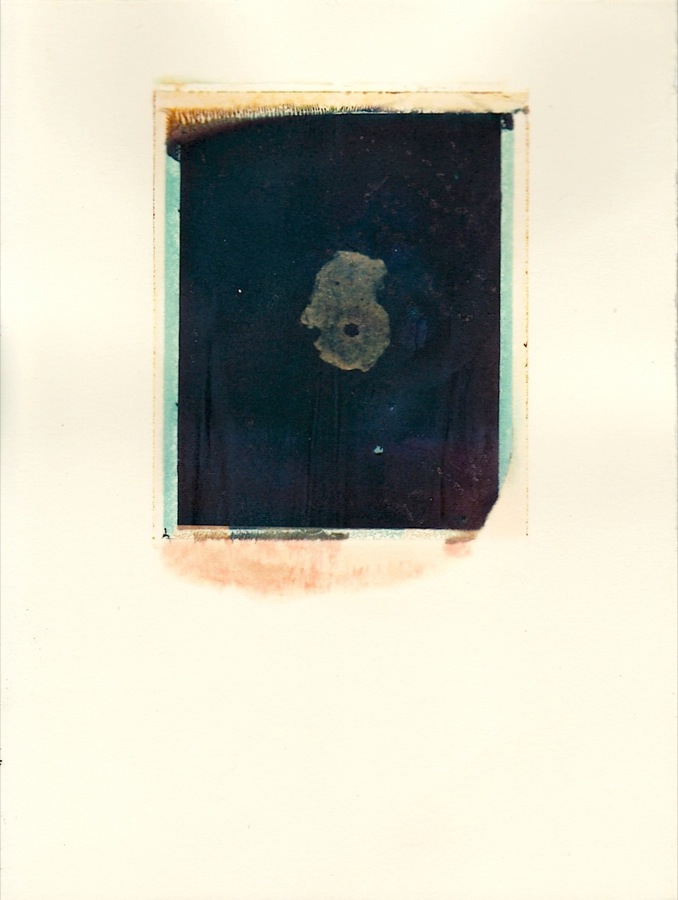 My interest in this peculiar place, a convergence point of time and the land, began with a fascination with trinitite. Physically speaking, trinitite is an unremarkable material. Composed primarily of a feldspar-rich arkosic sand and quartz particles, the resultant glass has little to offer the fields of mineralogy and geology. Trinitite has a pumice-like appearance, riddled with cavities and brittle, like dried bone. Many specimens have a greenish tint; rare pieces contain red flecks and streaks, remnants of the vaporized bomb casing and scaffold structure. It is typical of trinitite to have a smooth, glassy surface on one side, with a more rough and uneven texture on the opposite. The most prized examples are rounded and smooth on all sides, drops of trinitite believed to be the "rain" of glass falling back to the ground from the explosion, cooling to hardness before reaching the desert floor. Trinitite contains higher amounts of background radiation due to the cesium, barium, and other radiological elements contained within, but it is safe to handle with bare hands.

Trinitite questioned how glass could be used for containment and how a material is able to embody the complex history of its creation. I began to see Trinitite as a self-sufficient conceptual vessel, but it required interpretation and context. Despite the many layers of referent inherent to it, this information was not self-evident in its structure or appearance. If it is the duty of historians to accumulate, analyze and interpret moments in time, it can be said that trinitite demands the same strategy of classification, rather than existing as a mere mineralogical curiosity. In this train of thought, trinitite benefits from the authority of being viewed as an alternative artifact or reliquary. To move our understanding of the geologic forward, previous models of interpretation for history, geology, and the archive must be redefined, and composed into a new discipline of investigation. Trinitite, as a discreet object, provides the opportunity to view and understand the complex nature of events on a manifold level. Therefore, where the natural and academic sciences are frustrated, the realm of poetics intercedes.

As an artist, I felt that to merely visit this site was not enough. I wanted to formulate an experience that would be equal parts research endeavor, performance, and act of reverence. To that end, I chose to dress myself in the distinctive style of the lead scientist of the atom bomb's creation, Dr. J. Robert Oppenheimer. A genius of theoretical physics, Oppenheimer was an iconic, contrary figure for The Atomic Age and embodied the internal, moral struggles of the scientists involved with the construction of The Gadget. It was my hope that those who flocked to Trinity would recognize the costume; it would be as much an act of personal curiosity as ritual to conjure Oppenheimer's spirit. To see and be seen at Trinity was a condition of the research, an opportunity to address this transformed land as a living history. 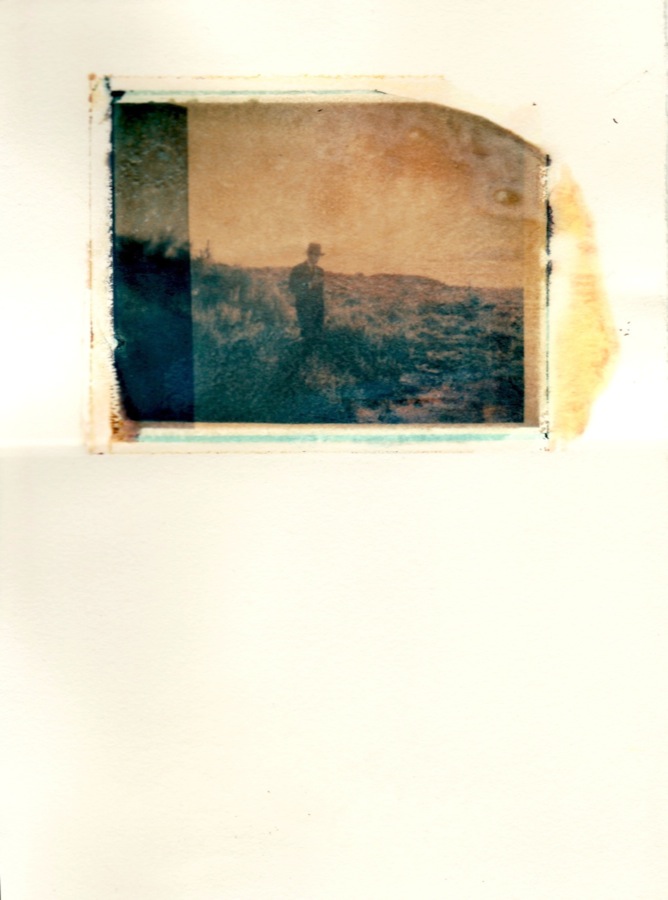 Walking the Trinity Site, one has the strong feeling of a geographic point intersecting with geologic time. The very nature of nuclear technology, with the necessity to mine and refine naturally radioactive ores and minerals, is to engage with a timescale beyond human understanding. The half-lives of enriched minerals and isotopes spans into the tens of thousands of years, a source of harm to life for many hundreds of human generations. The threat of nuclear warfare and the mismanagement of nuclear stockpiles are not to be underestimated, nor minimized in any way. But perhaps the more insidious and prescient problems involve sites of radioactive contamination and waste accumulation. The process of creating enough uranium-238 and plutonium for the bomb required the creation of industrial facilities at Hanford, Washington and Oak Ridge, Tennessee. These sites produced massive amounts of volatile nuclear materials, and the ecological consequences of their production are a burden upon the present.

It is interesting to note that trinitite is not the only manmade glass containing radioactive substances and isotopes. The pioneering work done at Sellafield Limited in the United Kingdom has introduced an industry standard protocol to decommission highly radioactive substances by trapping the materials in a glass matrix, known as "vitrification." While this process allows the waste materials to become chemically inert, it does not diminish their radioactivity. Each batch of the formulated glass is poured into thick, stainless steel containers, themselves sheathed within thick concrete sleeves. Burial within a fortified repository is the most practical solution for how these containers will be dealt with, in the long term. But this is not a definitive solution, there are many problems that emerge and their solutions ill defined. Due to the long half-life of industrial radioactive materials, the processed waste remains deadly to life for up to 50,000 years.

My experience at Trinity, combing the packed desert floor for bits of trinitite, offered an alternate interaction between the land and myself. I had formulated the trip as an examination of a strange place within the American landscape through my own artistic practice. Beyond the scattered trinitite and the surprising amount of spectators to be found at Trinity, I found an entry point to forces more basic and grand than myself. 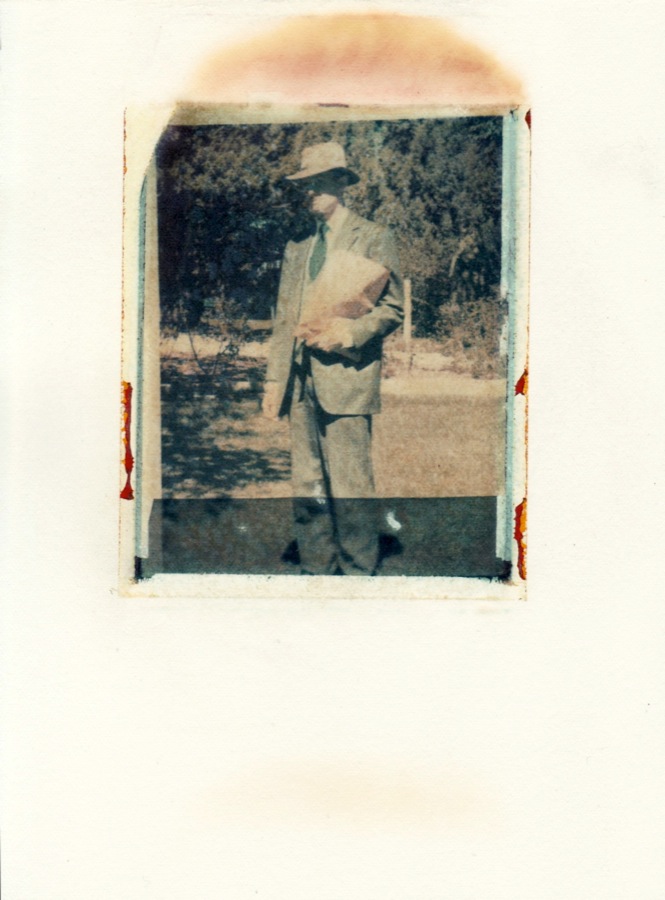 from Trinity Pilgrimage, Bryan M. Wilson, 2009
back to top ↑