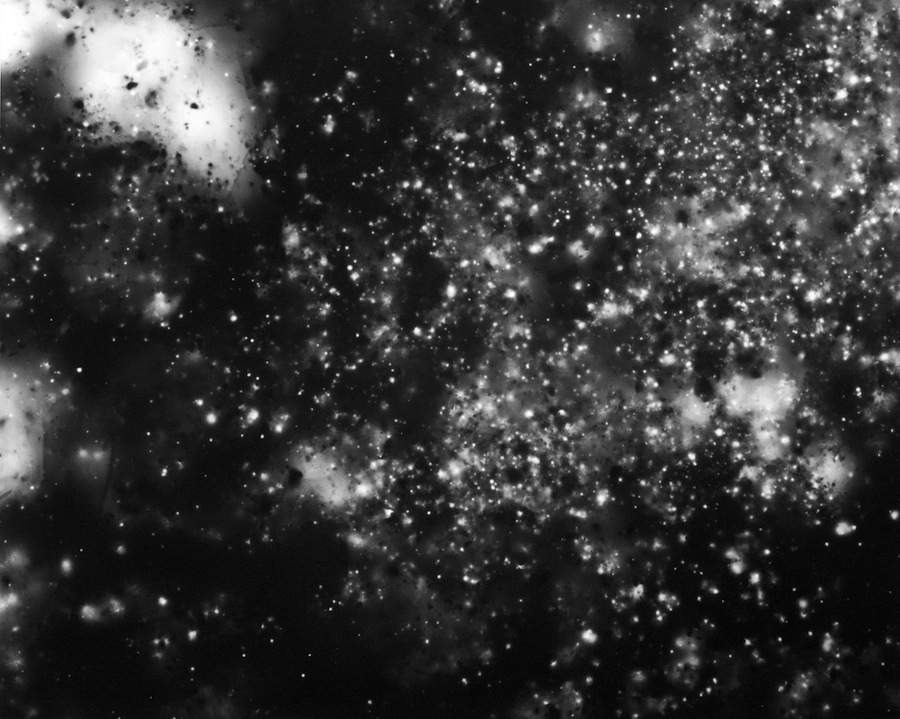 As an artist working with analog photographic techniques that are rapidly in decline, a native of Japan, and moreover being born in Fukushima prefecture, I took on a mission to create a physical record of the worst man-made nuclear accident in history.

A photograph can be created by electromagnetic radiation other than light. Radiation and visible light are similar forms of energy, they just travel in different wavelengths. Using cameraless processes, I want to capture the current state of Japan directly, by exposing photo-sensitive material to traces of radiation emitted from contaminated particles.

Through visualizing the traces into visible form, the resulting images will speak to us beyond the photograph, and perhaps they will be a valuable asset and documentation for future generations.

Radiation such as X-rays and gamma rays are high-energy electro-magnetic waves that can expose light-sensitive film and paper. Shown below, radioactive substances are placed on top of the film, emitting radiation that passes through a plastic sleeve to create a trace.

Before collecting soil in Japan, I needed to test a few things. Making a radiograph, exposing photosensitive paper with radioactive materials, is more common than you might think. I've found many enthusiasts doing related experiments. Normally, taking an x-ray photograph requires an x-ray generator emitting high radiation to expose x-ray film in a very short period of time in order to get a clear image and to minimize the radiation exposure. But, if you use instant film, you can make a radiogram without having a darkroom, developing trays, or chemicals.

A Photogram, placing an object on photo paper to expose the shadow of shapes, requires from 1/10000 to a few seconds of exposure. And following that procedure, processing the paper takes about five minutes. With this relatively short time process, although it's hard to get the exactly same composition each time, you can create similar compositions with adjusted exposure time or brightness of the light source. In contrast, creating autoradiograph by using low level contaminated soil takes a very long process. In my calculations, and from my experimentation, I project that, by using the soils that I am planning to use, the exposure required will be a few weeks to a few months to get decent dark gray. And if you need to redo it to get longer exposure, you need to redo from zero again.

Through my research on radiograms, I found that I can purchase an exempt quantity of nuclear isotopes in a safely sealed container, for scientific or educational research purposes. I chose a Cesium-137 disk, one of the main isotopes found in nuclear fallout. The disk was "freshly" shipped from a nuclear supplier in Tennessee. It is sealed in one-inch diameter plastic with epoxy to prevent leakage and contamination. I placed the disk on four layered pieces of four by five inch enlarging papers and kept them in a blackout box. A week later, I developed the papers, and the Cesium's activity was clearly recorded. As a sheet of paper slightly blocked the radiation, the lower sheets got a smaller black dot. The Geiger counter that I use for now is not the most sophisticated one, but it reflected the radiations at about 6.7μSv/h.

*At a later date, using a more sophisticated radiation meter, I put the disk in front of Mica window, right outside of the Geiger tube and I found the disk's reading was actually over 200μSv/h.

Fiestaware was a popular vivid colored dinnerware introduced in 1936. It wasn't the first solid color tableware company, but it was the first widely mass-promoted and marketed in the U.S. Fiesta's red-orange glaze (1936-43) is well-known for containing significant amounts of radioactive materials in its uranium oxide glaze. Actually, it was used widely for the red glaze produced by all U.S. potteries of the era. The use of uranium in its natural oxide form dates back to at least the year 79 CE, when it was used to add a yellow color to ceramic glazes. Yellow glass with 1% uranium oxide was found in a Roman villa on Cape Posillipo in the Bay of Naples, Italy. When 1% Uranium oxide is added into the glaze, it becomes yellow, and the more added the more orange to dark red it becomes.

This radioactive Fiestaware that I purchased is believed to contain 15% uranium oxide in the glaze, which is 0.17oz (5g) per plate in average. In 1943, the government banned using Uranium by corporations, and confiscated the Uranium of the Homer Laughlin China Co. It reminds me of Imperial Japan's National Mobilization Law that collected all metals from citizens, including bells in Buddhist temples for war efforts. Surely, the scale is much different, however. In any case, radioactive Fiestaware has been described as one of the most radioactive commercial products you could buy.

For this experiment, prior to exposing photo-sensitive materials with nuclear contaminated soil, I crushed the Fiestaware plate to make the material more random than a single flat plate. I stored an enlarging paper with the crushed plate in a box and exposed it for a week. The exposure result was the shapes of the plate pieces outlined on the paper. I determined an even longer exposure is needed to get dark grays. As I used my Geiger counter to measure this material, it indicated 1.47μSv. After a month in the enclosure, the Uranium Oxide's radiation is clearly recorded on the photo paper. 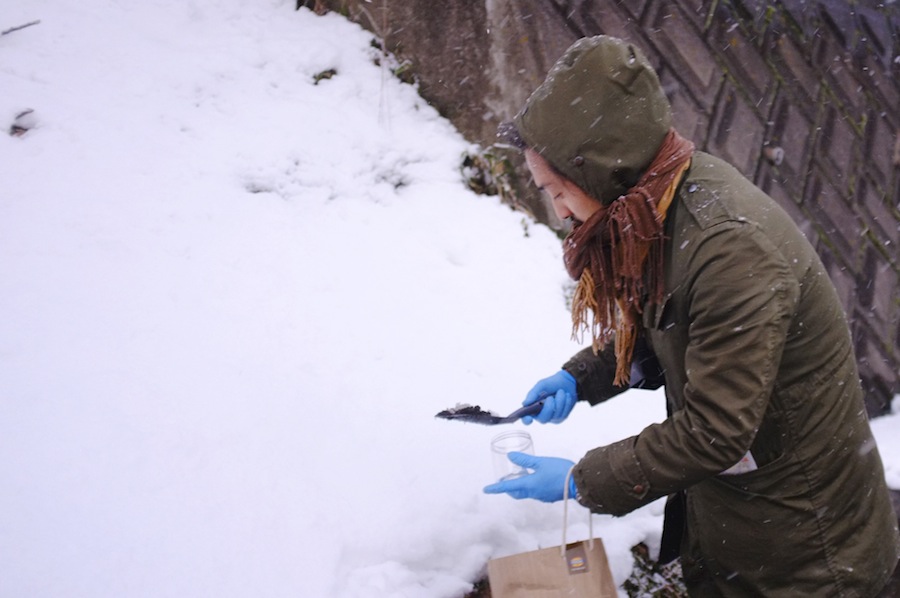 Fortunately, my family, close friends, and their families were not directly injured by the devastating earthquake and tsunami, which hit Japan on March 11th, 2011. While the world and media watched the country as it was devastated by the disaster, many of my friends kindly called or e-mailed me to check if my family and friends were affected. As it's been almost a year and a half since last March, the media has been busy covering the economic fallout; while the physical radiation fallout, and potential for more disaster continues. I recently saw a photo of the aftermath, taken by a good friend of mine from Sendai. Some damaged neighborhoods haven't recovered at all. Massive debris has barely been cleaned up and radiation is still being emitted. In times like this, I feel I'm alive because my ancestors survived though numerous disasters, wars, and starvation. From this perspective, when I look at a map and at historical sights, it's hard not to imagine the historical blood marking the ground. Tombs, graveyards, a temple, or a battlefield are direct marks, but also some war-related ruins and other hidden memories of tragedies can often be found everywhere in Japan.

I am not expecting that a radioactive trace taken at these historical sights will serve as a memorial service. More, it would be a meaningful pilgrimage to visit these sights and conduct the trace upon each visit.

In January 2012, accompanied by Shingo Annen, a hip-hop activist, and architect Keisuke Hiei, the "Trace" crew collected 16 soil samples in 12 locations. I selected distinctly different locations in five different prefectures, all of which contain a strong memory of life and death, such as temples, shrines, war sites, and ruins of castles. I included Sukagawa City, forty miles away from the Fukushima nuclear plant, my birthplace and current home to my grandparents.

While the "Trace" crew collected 16 soil samples in 12 locations, we carried radiation meters with us during the entire trip. As we traveled to my birthplace in Fukushima, my parents' house in suburban Tokyo, where I grew up, and to all the memorial places we visited, I found these places all to be contaminated, albeit in different degrees. Although I was aware of this previously from data visualization maps, looking at the raised numbers on my Geiger counter as I traveled to these locations confirmed this to me, sadly.

Since the Fukushima Daiichi nuclear disaster occurred, I've studied the effects of radiation on humans intensively. Hiroshima and Nagasaki's nuclear bombs, numerous nuclear weapons testing in the atmosphere and underwater, and the Chernobyl disaster--these events created enough guinea pigs to fill the reports on the effects. Visiting contaminated areas and seeing the number rising on radiation meters, it sometimes made my heart beat fast. But, ironically, once you ignore the numbers, you just become aware of the beautiful country's landscape spread in front of you.

This is why I wanted to visualize this nuclear disaster in my artistic processes. Sixteen soil samples have been stored with 8×10 B/W sheet films in a light-tight enclosure individually for a month, and I developed the film to find out how the Fukushima disaster has created the Trace. 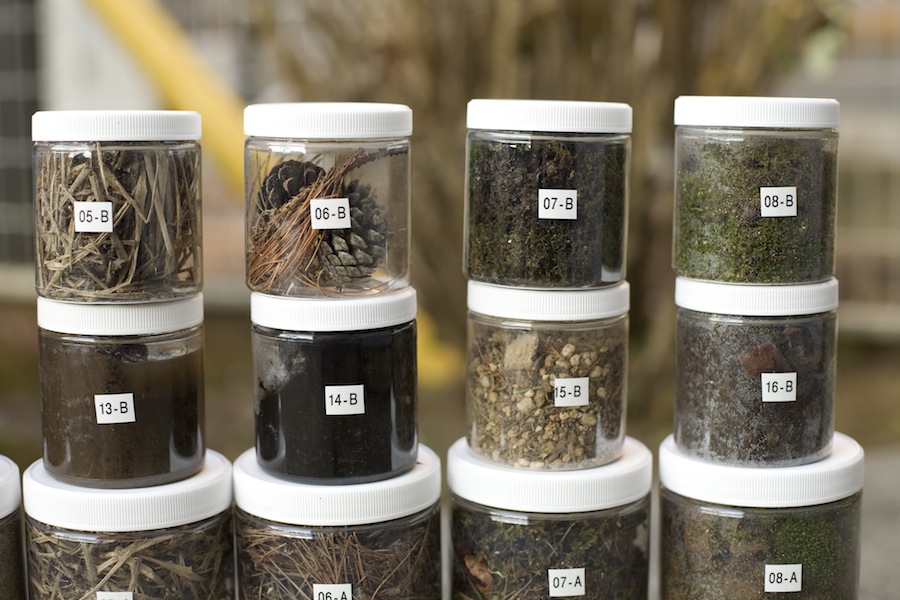 From Trace – cameraless records of radioactive contamination, Shimpei Takeda, 2012
back to top ↑