Power of Configuration: When Infrastructure Goes Off The Rails

. . . things that never happened before are possible. Indeed, they happen all the time. 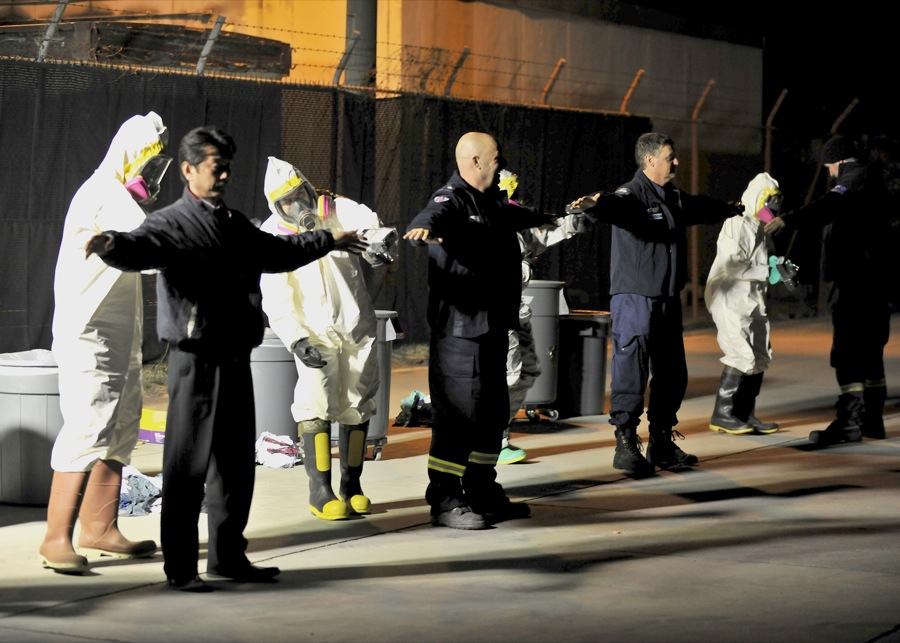 On November 11, 2011, the Institute of Nuclear Power Operations (INPO) delivered a timeline to an audience of U.S. industry executives, the Nuclear Regulatory Commission, and members of Congress. It detailed the unfolding of events at the Fukushima Daiichi nuclear power station during, and in the critical hours following, the earthquake and tsunami of March 11, 2011. The story contained within the document entitled, " Special Report on the Nuclear Accident at the Fukushima Daiichi Nuclear Power Station ," reads like a screenplay. The gravity of the immediate hours after the accident, detailed and delivered through stark legalistic language, confronts the reader with a poignant reminder: when things don't go as planned, human bodies are what must show up to try to steer things back on course.

TEPCO, the electric company that owned the Fukushima Daiichi plant, clearly had never imagined, nor planned for, the spectacular forces that materialized on March 11, 2011. Tsuneo Futami, a nuclear engineer who was the director of Fukushima Daiichi in the late 1990s, has stated, "We can only work on precedent, and there was no precedent. When I headed the plant, the thought of a tsunami never crossed my mind."

In the crucial minutes and seconds in which the unimaginable actually does unfold, highly complex situations transpire in instants. The configuration of people and things becomes fundamental to what happens. Reality shifts into a configurationist map-in-motion, a rolling landscape of trip wires and tipping dominoes. Each action, placement and location sends vectors of consequences propagating into the far future. 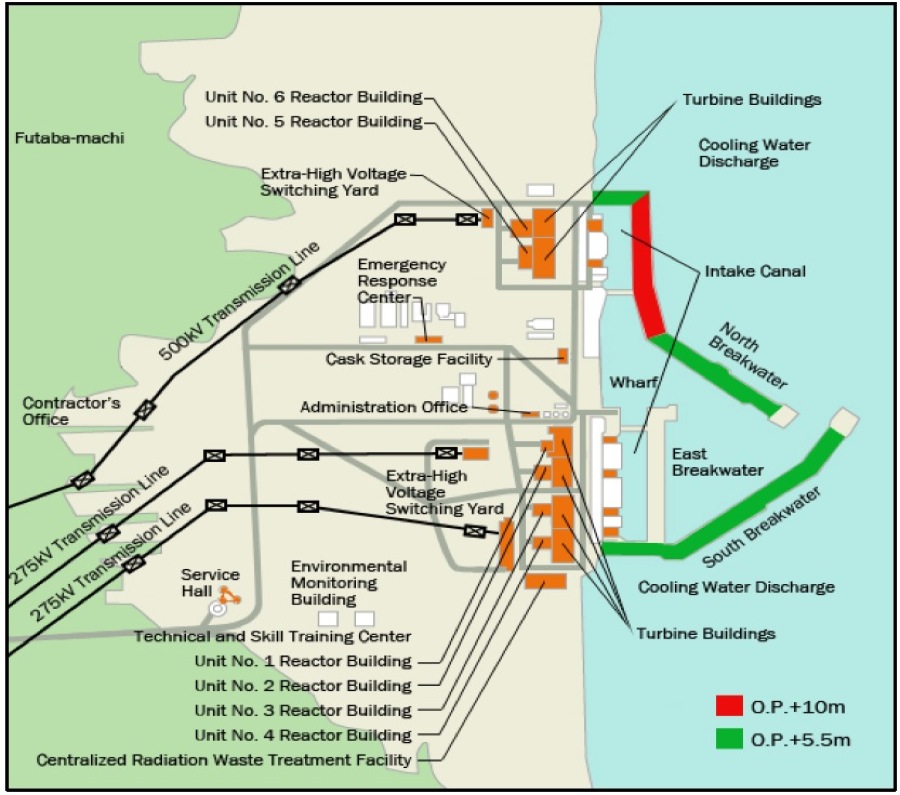 “Configuration” diagram of the Fukushima Daiichi facility
Image courtesy of the Institute of Nuclear Power Operations.

How high do the waves reach up the bluff? Where are the fire trucks parked in town? How far inland do the dry casks sit? How deep do the spent fuel rods rest in their cooling pools? How far are the plant's exit gates from here?

Where each building is sited in relation to each human, each fire truck, each monolithic sea wall, each wave - all matter immensely and in interconnected ways.

This highly particular configuration of things varies from moment to moment and is what will mix and ramify into the resulting "nexts." Water is no longer water, but a substance flooding basements storing backup generators. Utility employees become authorities, emergency personal, evacuees, heroes, and victims.

At Fukushima, the force and scale of the events reconfigured an energy generating plant, typically a life-supporting affordance, into something else, into something unrecognizable. Fukushima Daiichi shifted from being an energy-producing infrastructure into a risk-generating machine - with massive geologic consequence. The facility dissolved into an assemblage of unpredictable actants in the forms of zirconium rods, uranium, plutonium, hydrogen, salt water, copper, plate tectonics, massive waves, electricity, darkness, design ingenuity, engineering failure, steel, reinforced concrete, basements, and sea walls.

These elements not only performed independently of human desire, they acted back upon us in profound and irrevocable ways. Many of these things-become-forces continue to do so today, more than a year later. Some will continue to do so for generations to come. 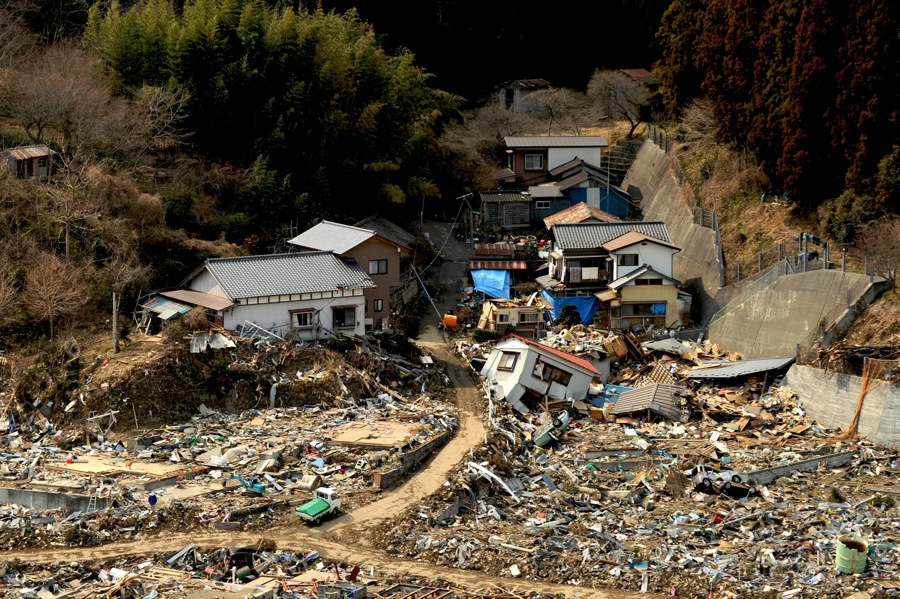 An awareness is growing: long-term futures hinge on how we humans assemble with things that can unexpectedly reconfigure in a matter of micro-seconds. We are beginning to sense the necessity of acknowledging forces that extend deep below the earth's surface, and the relevance of timescales that exceed human time. As we begin to respond, we are prompted to consider: what if anticipating geologic scales of force, change and effect became a common design specification? What if energy production, policy-making, and infrastructure design projects began to account for lively and wildly unpredictable geologic actants?

Excerpts from the "Unit 1 Validated Event Timeline" (pages 71-80) in "Special Report on the Nuclear Accident at the Fukushima Daiichi Nuclear Power Station." All times are provided in Japan Standard Time (JST).

The tsunami design basis for Fukushima Daiichi considered only the inundation and static water pressures, and not the impact force of the wave or the impact of debris associated with the wave. The design included a breakwater, which ranged in height from 18 ft (5.5 m) to as high as 32.8 ft (10 m), as shown in Section 1.1 (p. 47).

The Act on Special Measures Concerning Nuclear Emergency Preparedness (commonly referred to as the Nuclear Disaster Law) was established in 1999 in response to the September 30, 1999 inadvertent criticality accident at the Tokai uranium processing plant. The accident resulted in overexposure of three plant workers and additional unplanned exposures to 66 plant workers, local inhabitants, and emergency support personnel (p. 67).