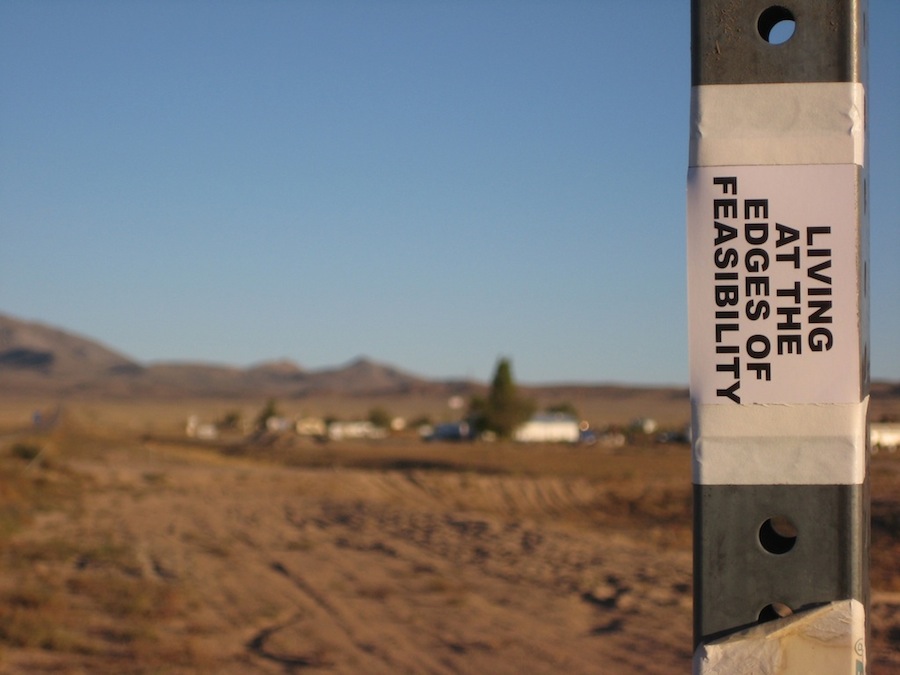 Ellsworth and Kruse have curated a powerful collection of words and images, “speculative or aesthetic devices” designed to instigate a new economy of discernment. It incites by showcasing a host of geologic actants — rivers, shale, escarpments, volcanos, tectonic plates, glaciers, river deltas, riprap, mud, clay — at work around and within human bodies, machines, cities, identities, architectures. Such "activations of geologic materiality"[1] help to recompose the default perceptual regime, which had tended to overlook the geologic (except on special occasions) and to forget how thoroughly we ourselves are geo-creatures — Earthlings.

We are Earthlings both in the sense that we need a host of other bodies ("the planet") to live and in the sense that "we" are made of the same elements as is the planet. We are "walking, talking minerals,” redistributions of "oxygen, hydrogen, nitrogen, carbon, sulfur, phosphorous, and other elements of Earth’s crust into two-legged, upright forms.”[2] Like wind or river, human individuals and groups are geologic forces that can alter the planet in countless and, as the concept of the Anthropocene marks, game-changing ways.

Indeed, I think that one of the events that the idea of Anthropocene tries to capture is a certain convergence between two styles of temporality that we had formerly thought were distinct. The first style we had associated with the apersonal geologic: this was a bi-modal time of either a breakneck and explosively transformative speed (lightning, earthquake, wildfire) or an implacably slow, deep time (sedimentation, erosion, radioactive decay). The second style of temporality we identified as prototypically human: this was the more moderate, midrange speed of human endeavor, the enactment of intention or plan, the time of the everyday. There were, of course, exceptions, such as the superfast impact of the atomic bombs the Americans dropped on Hiroshima and Nagasaki, or (what many believed to be) the gradual accretion of human knowledge throughout history. The idea of the Anthropocene, however, suggests that the exceptions are not exceptional and that there is little reason to posit a hard, ontological dichotomy between human and ahuman forces, with regard to their temporalities or scope of effect.

Alongside a new economy of discernment, Making the Geologic Now also supports a different, more ecologically careful, economy of consumption and extraction. A keener cultural sensitivity to the deep and periodically explosive time of the geologic might, for example, encourage the pursuit of sources of energy that do not generate waste so toxic that it must be quarantined for one million years, or discourage practices like fracking that foul the water and might contribute to earthquakes. Affirming the geo-mode of long time also holds promise for lifting American political discourse above its currently idiocy, wherein crucial issues like climate change are elided for the sake of moralistic red herrings or theo-populist slogans. Geo-political theorist Jairus Grove provides one example of this in a recent Facebook post: “Nothing says rearranging the deck chairs on the Titanic like two presidential candidates arguing over the size of tax cuts when fish are boiling to death in the Midwest.[3]

Making the Geologic Now hopes, as do I, that a sharper awareness of the geologic operative both around and through us would do us some (pragmatic, political) good. “The understanding of earth processes,” write Ellsworth and Kruse, “can offer inspiration for how we might think about the qualitatively different ways that humans are now living on planet earth.”[4] But they may put the point too mildly: Yes, this understanding can push us to "think" about modes of life, but this thinking is also a judging about which ways can best ensure our ongoing existence. It seems important to admit that at least one of the goals of the geologic turn is to figure out how to stick around as one species on the planet among numerous others — how to maintain our Earthling status in its various entanglements. For me, one of the effects of a heightened awareness of the interpenetration of the human and ahuman geologic is that it stretches my definition of “self”-interest to include the flourishing of the complex system of bio-geologic processes. This enriched understanding of “self” would then, I hope, enable a more extended pursuit of our conatus, the endeavor to persist in being.[5]

Bill Gilbert suggests that (alongside the pursuit of a new sensibility and a new political economy) we need a new “narrative as a nation and species,” one that “encompasses the expanse of planetary time, not the fleeting moments of pop culture.” We need this, he says, if we want the Anthropocene “to extend for thousands of years into the future.” And we do want this extension, don't we? Don't we readers of Making the Geologic Now unconsciously project forward, if not the destructive, short-sighted version of the Anthropocene, a “cene” that includes, for as long as possible, the presence of the anthropos? When I make this implicit project overt, I see that I seek the postponement of the arrival of a radically posthuman future. And that this is a big part of why I (and perhaps other of the contributors to this collection) seek to open up “possibilities for humans to evolve ways to live in relation to geologic time.”[6]

What of this conative desire, to be (or for there to be) Earthling(s) now and forever? Can the identification as Earthling be detached from the hope that Earth continues to include us? Should we try to detach geologic sensibility from all notions of self-interest? Is it really possible, given our current evolutionary form, to live according to the maxim that “while the human species can't get along without the geologic, the geologic will continue on in some form or other long after we have ceased being part of it?”[7]

I'm not sure of the answers to these questions, but if I had to come down somewhere, I'd say that the assumption of belonging and the tendency to project ourselves into the long-term horizon of the geologic run pretty deep. Or at least at this point in late-modern history they function as key parts of what motivates ecological practice and its various attempts to postpone the arrival of a posthuman earth and the vast suffering that it will be — aleady is — entailing. The idea of a deep belonging between human beings and a rather volatile earth also provides much of the energy for the political project called the geologic turn.

I liked Lars van Trier's 2012 film Melancholia for one reason: its realistic staging of the scene of the end of the earth (by means of a collision with a much larger planet) jolted me into remembering that, in addition to being a woman, an American, a teacher, a friend, on the Left, etc., I am also, perhaps first and foremost, an Earthling.[8] I live on and through an assemblage of materialites hurtling through space. I mention this because the will to belong to earth, to maintain Earthling status for the unforeseeable future, seems quite capable of persisting alongside a growing sense, within science, art, and popular culture, that this fit is nowhere guaranteed. The contemporary version of the will to belong is perhaps the latest in a long line of hopeful projections of a fittingness between humanity and the future. Religious versions include the notions of intelligent design and Providence. Focusing on the latter, Freud at first considered it an “illusion” susceptible to demystification, an infantile wish to be outgrown. But he too seems to have come ultimately to the conclusion that it is not so easy to vanquish — by reasoned analysis or the production of counter-narratives — the will to belong to the future. It is instead extremely resilient, born as it is “from man’s need to make his helplessness [in the face of the overwhelming power of nature and death] tolerable.”[9]

One doesn't have to be a theist (I'm not) to share something of the faith that humans belong to the earth, even if the earth doesn't belong to humans. Projecting ourselves into the geologic future may be what Earthlings do; pretending that this sort of projection will fulfill itself automatically is something we do too much.